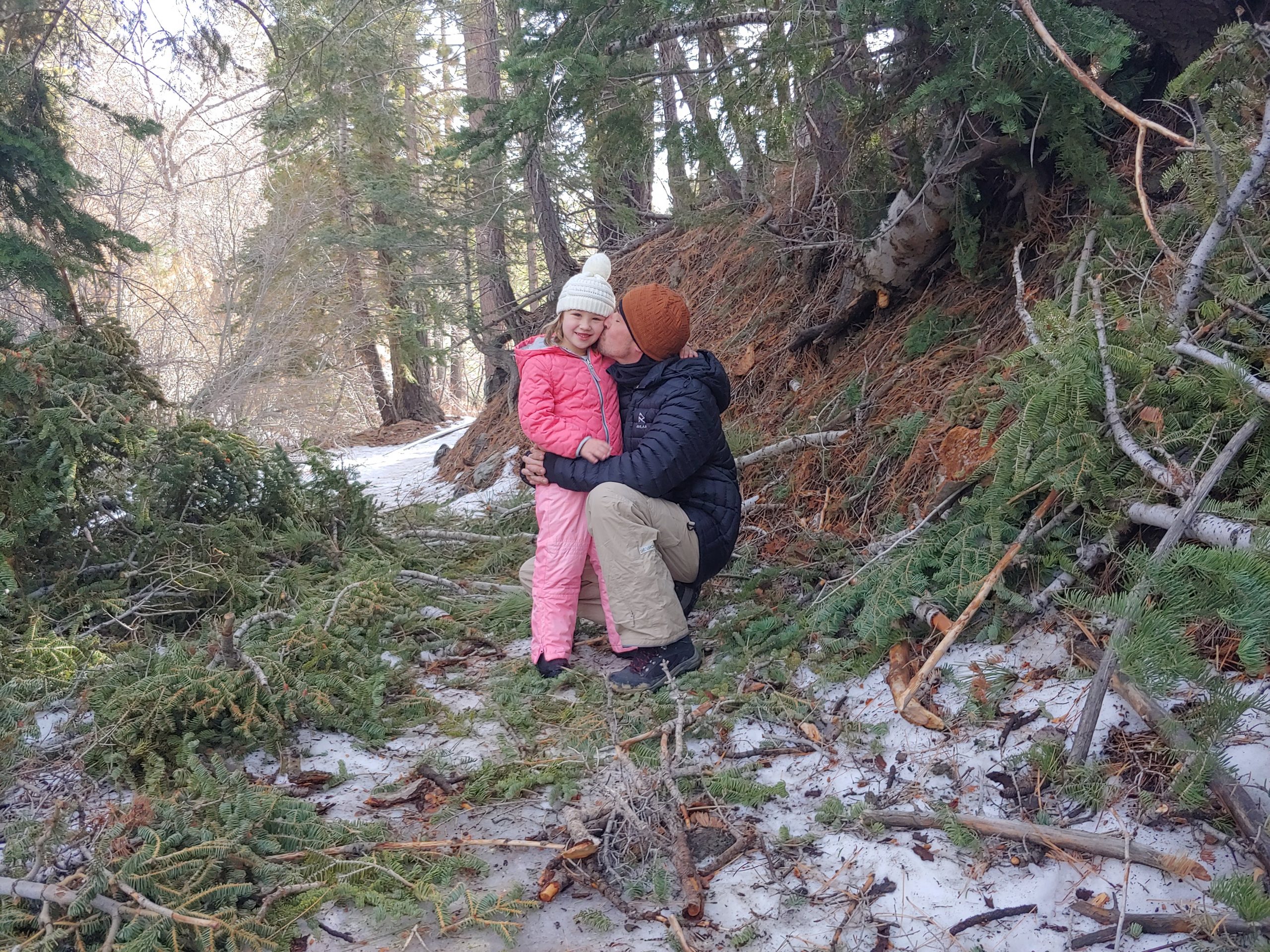 As a Wisconsin native myself, I will be the first to admit that Californian’s have absolutely no concept of “cold.”  Typically if someone from California, especially Southern California where I now live and the Good Sam Club HQ is located, tells you “It’s freezing outside!”; that means its somewhere in the low 60’s.  Now, this isn’t the case for all California folk, but the majority of us are just kinda weenies when it comes to cold weather.  That being said, however, it sure does make snow days out here much more tolerable.

There is just no disputing it, the single largest selling point about living in California, the thing that makes the astronomical rent/mortgage worth it, the insane $5-a-gallon gas prices we have been known to have, the ridiculousness of CRV (you should have seen my friend from South Dakota when I tried to explain to him what CRV is) is THE WEATHER!  Living in Los Angeles grants us a very unique year-round adventure opportunity, and that is that within a two-hour drive of my home I can be at a lake, the desert, the Pacific ocean, the snow, the forest, and even Disneyland.  And it will never be too cold or too hot to do any of it.  So when I say that we had a snow day, it means we piled the kiddos into our cars, drove for an hour and forty-five minutes, parked on the side of the Angeles Crest Highway, and had ourselves an awesome day in the California snow. 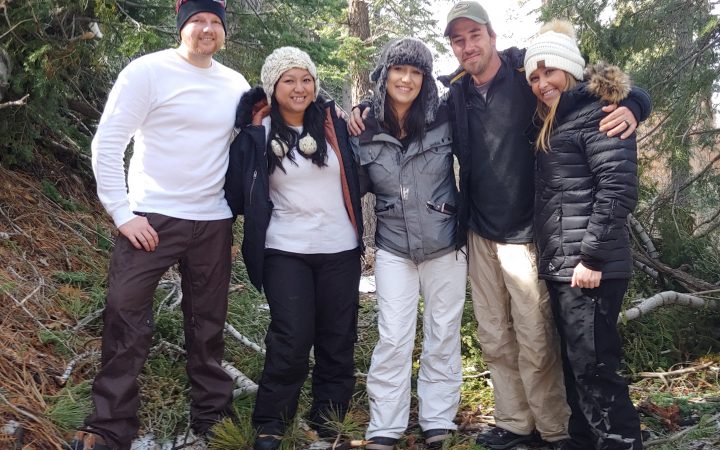 Our trip consisted of my beautiful wife and me, some good friends, and five little girls aged from four to ten. And for three of those girls, it was their very first time experiencing snow, ever.  So the stakes were high for an epic day, and the Angeles Crest National Forest did not disappoint.

Equipped with some amazing Ravean Down X heated jackets to stay warm and toasty all day, the mission was to give the girls NOTHING to drink once we got past the last gas station stop as there are no bathrooms in the snow play areas, make sure they had all their tiny gloves, boots, scarves, beanies, jackets, pants, and goggles.  Next we had to trek a mile from the parking spot of the car into the forest for some sledding, snowman creation, snow angels, and of course – a five on five snowball fight.  I am happy to report that, despite two pretty gnarly accidents, us parents delivered on our promise of having a great family snow day. 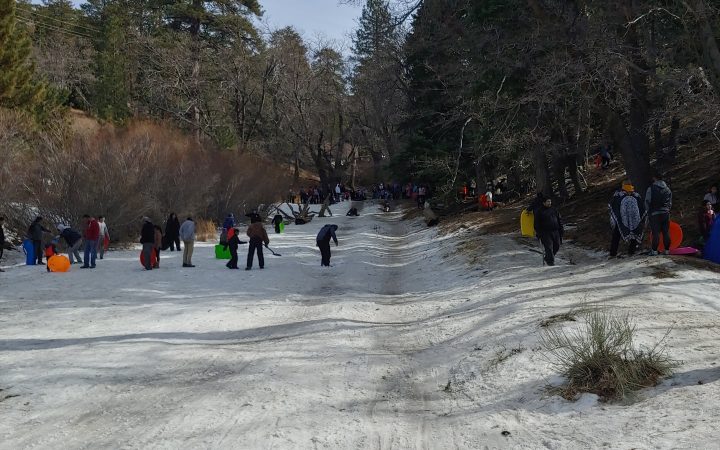 The main mission of the day, the one thing that everyone wanted to do for sure, was hit the slopes on some sleds. And, right off the bat, this proved to be a critical miscalculation on our part.  We began our walk with the girls in tow and found the first hill.  As we approached, we saw a child racing down on a sled and plummet into his dad’s legs at the bottom. Dad was sent toppling over, and we quickly elected to move on to a little more entry-level slope.  We decided to stop at the second hill we found.

The very first of our kiddos to go sled down it, ended up doing the EXACT same thing to my wife as we had seen happen to the poor dad; sled crashed into her legs and she face-planted into the snow (yep, that’s the mark you see on her chin in the photo below). I waited at the top of the hill with the anxious line of girls and their sleds, and once I was confident she was alright and the activities could continue, I yelled down to our videographer to not stop the kids while standing up, but instead to go down to his knees and catch them that way so he wouldn’t get knocked over.  The next kid, and I mean literally the very next kid, rocketed toward him, he didn’t drop down to his knees, and boom! – faceplant number two.  And his was bad; his sunglasses cut his face above and below his eye.  I rushed down the hill toward him and applied a very frosty snowball to his eye (which he hated) to try and stop the bleeding and swelling.

After about fifteen minutes of recovery, we elected to try another hill with even less of a decline.  Finally, the last spot proved to be the sledding oasis we had hoped for (as you can tell from the video above.)  We let those kids go crazy on the slope and stayed for about two hours of thrilling play. 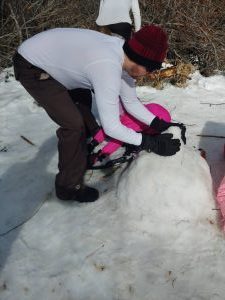 After completing the daunting task of finding the perfect slope to shred on, we decided to close out the day with an all-out snowball fight, nay, battle!  We split our group of ten into two teams, found a large snowy area to conduct our frosty melee, and the battle began.  As you can see from the photo on the right, the adults took this opportunity to have some fun as well.  I will tell you that as much as I love connecting my family’s energy into any kind of nature-based outdoor activity, there is something special that happens when you are given the opportunity to be one of the kids too.

Whether it’s at the beach, helping them build a sand castle that you just can’t help but put a little too much effort into making the perfect moat around, or building a snowball the size of your daughters head during a snowball fight with a bunch of six-year-olds (don’t worry, he didn’t throw it at them), these are the best possible ways to make memories with your children; by letting your inner child play with them. All-in-all, if I am being honest, I ended up on the losing team due to poor base choices that just allowed us to continually be ambushed by a gaggle of giggling girls, but this was the most fun I have ever had in the snow; and I’ve been a snowboarder for over ten years!

As with any of our Dad Outside trips, it always comes down to the time we are committing to being a family and doing adventure together on purpose.  We get so busy and caught up in the cycle of life; wake up, shower, get the kids ready, drop them off at school, go to work (after sitting in traffic for an hour), go home (an additional hour of traffic), make dinner, give the kiddos a bath, homework and story time, bed and then rinse, wash, repeat the next day.  It is important to us as a family to be intentional about the time and memories we choose to create.  What that means to us, is that we don’t put very many plans on the calendar for our weekends.  Instead, we try and keep our weekends as open as possible to be open to the possibilities that come our way and not be bogged down by the routine of three birthday parties on Saturday, chores on Sunday, etc, etc, etc.  It just wasn’t healthy for us and we chose to remove the routine out of our weekends.

Unfortunately, we are stuck in the routine grind (for now!) during the week, but the weekends are all ours and they allow us the time to invest back into our family and the memories and lessons we learn together and grow together from.  This trip was not only a great time for our little family but getting to see young girls experience something as special as the snow for the very first time and knowing that our daughter is forever cemented into that memory with her friends, that’s the special sauce for us.  So after five hours of sledding, face planting, snowball battles (for some reason there was an infatuation with hurtling snowballs at the dads’, how shall I say this; “dad places”), making snow angels, and enjoying the natural beauty of the pines of Angeles Crest National Forest, we drove home fulfilled and energized in the investment we made into our family and our friends.  Until the next adventure…

About the Author:
Jeremy P Elder is a U.S. Army combat veteran and award-winning podcast producer and host.  In addition to having over 15 years of Business Development and Marketing leadership history with titans of the modern age like Sprint, Verizon, and Aerovironment, Jeremy has also owned and operated several successful marketing firms and projects. He is a proud father and writes the A Dad Outside blog series about adventures with his young daughter and is the author of Topics of Heroes and its sequel Topics Too. Jeremy serves as the Digital Product Manager for Good Sam Enterprises and writes several blog series’ for Good Sam, Trailer Life and Motorhome and conducts new product reviews. 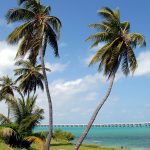 4 Reasons to Relax in Big Pine Key and Florida’s Lower... Previous
Make Money on the Road With RV Travel Next 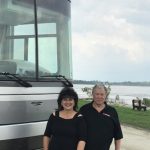