The sun is out and the weather is great, just like any other day in Yuma, Arizona.

The Territorial Prison, also known as "Hell Hole" and "Devil's Island" opened in the Arizona desert on July 1, 1876 when the first 7 inmates entered the prison and they were locked into the new cells they built themselves. © Rex Vogel, all rights reserved

It should not surprise anyone that US News and World Report again named Yuma as the number one “sunniest place” in America to spend their golden years.

Arizona’s warmest winter city and the sunniest year-round spot in the U.S., Yuma has an annual average of 4,133 hours of sunshine. Yuma has a classic low desert climate with extremely low relative humidity and very high summer temperatures.

Located at the confluence of the Gila and Colorado rivers, Yuma began as a natural crossing of the then-wide and wild Colorado River.

In 1540, Hernando de Alarcon became the first non-native to explore the area, which was inhabited by the Yuma people, a combination of lower Colorado tribes including Quechans, Cocopahs, and Mohaves; and in the 1700s, Father Eusebio Kino passed through.

On the Colorado River in the southwest corner of Arizona, Yuma's been at the crossroads for centuries. © Rex Vogel, all rights reserved

But it wasn’t just Jesuits and Native Americans. In 1850, an estimated 60,000 people traveled through on their way to California and the Gold Rush. The town was first known as Colorado City, then Arizona City, before Fort Yuma was established in 1849. In 1853, the area joined the United States as part of the Gadsden Purchase from Mexico. The territorial government named the town Yuma in 1873. It is now the largest city in Arizona outside the metro areas of Phoenix and Tucson.

With the arrival of sun-seeking snowbirds, the population nearly doubles during the peak travel months of January, February, and March.

During the 1870s, Phoenix was little more than a slow place on the Salt River. The Arizona Territory was dominated by Tucson in the south, Prescott in the north, and Yuma in the west. Yuma had the political clout, so when the territorial Legislature voted to build a prison in backwater Phoenix, Yuma lawmakers scratched out the name Phoenix on the bill and inserted their town’s name. The deed was done.

The hulking Territorial Prison, which is still a major Yuma tourist attraction, opened in 1876 and quickly filled to capacity but continued to hold outlaws until a bigger big house was built in Florence in 1909.

Arizona has long been known for citrus and cotton–but the fertile lands surrounding Yuma at the Colorado River’s delta are lush and green all winter, serving as the nation’s salad bowl. © Rex Vogel, all rights reserved

In 1877, the railroad bridge over the Colorado was completed, from granite knob to granite knob. The transcontinental railroad still crosses at the spot.

In 1915, the first automobile bridge was completed and opened up the cross-country road system for the first time. The bridge, still called the Ocean-to-Ocean Bridge, parallels the railroad bridge right by the old prison.

The Yuma valley has some of the most fertile soils in the world, having received silt and mineral deposits from the Colorado and Gila River floods until the rivers were tamed by an intricate series of dams and canals.

Some of the major attractions around the Yuma area include the historical Territorial Prison, the Yuma Crossing Historic Park, the Kofa Mountain Range and Wildlife Refuge, and Martinez and Mittry Lakes.

January 14-15: Gathering of the Gunfighters

Worth Pondering…
Yuma, Arizona: Rated as having the best weather in the United States.

Welcome to Quinte's Isle Campark Previous
Slab City: Life in the middle of nowhere Next 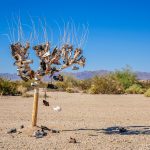