The RV Trivia Challenge 9. Are You Up To It?

Welcome to the first Lug_Nut RV Trivia Challenge of 2010.

The Lug_Nut RV Trivia Challenge No. 9 series will test your skills on a variety of RV related topics.  As usual whenever a broad base of topics are presented, it becomes difficult to know the answers for all the questions.  Please remember, this is trivia, requiring some guess work on occasion.   Get a pen and paper so that you can record your answers.  Upon completion, you can check your answers with those shown at the bottom.  Good luck.

1) What is the largest RV producer in the world?

3) If you wanted to camp overlooking the body of water that boasts the highest tides in the world, what body of water would you be viewing?

4) One of the pleasures of travelling by RV is having everything with you.  At a rest stop you can make up a snack and a “Cup of Joe”.  Of course a cup of Jo, or Joe, is coffee, but where did it get this name?

5) The recommended drawbar weight on a tow behind trailer is about 10% of the total tow weight.  What is the recommended weight for a fifth wheel hitch? 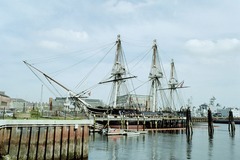 9) The picture to the left is of the U.S.S. Constitution.  In what city would you be visiting to see this?

10) Completed in 1886, the Carson Mansion represents the most photographed Victorian building in the United States.  This fascinating structure is visited by many RV’ers travelling a famous scenic route.  What area would you be touring to see this?

A)   Route 1 the Pacific Highway California.

C)    Going To The Sun Road in Wyoming

E)    The Sunshine Parkway in Florida

Well, you have done it.  Now check your answers with those below.  Don’t forget to post your score and comments in the section at the very bottom.

1) – (D) Thor Industries has manufactured and sold more RV units than any other company in the world.  Their brands include Airstream, all of the Keystone trailer line, Komfort RV, Damon, Breckinridge, Dutchmen trailers, Four Winds, and more.

3) – (A) The Bay of Fundy between the provinces of New Brunswick and Nova Scotia in Canada have recorded the highest tides in the world.  The maximum tide in the bay was recorded at over 52’ while Minas Basin, a small inlet in the bay has exceeded 54 feet.

4) – (B)  The origin of the phrase “Cup of Joe” dates back to the 1900’s and Admiral Josephus Daniels who was a secretary of the navy under the Wilson administration. The U.S. was involved with World War I at the time. He outlawed alcohol on ships which lead to coffee becaming the favorite beverage of naval crews. Hence the name “cup of joe.”

5) – (D) The recommended hitch weight distribution on a fifth wheel is 15 to 25% of the loaded trailer weight.

6) – (A) Lake Coeur d’Alene is located in the northern section of Idaho.

7) – (C) Two equity companies, Carlyle of Washington DC and Onex of Toronto Canada equally share Allison after the purchase from General Motors in August of 2007.

10) –(A) The Carson Mansion is just off route 1, the Pacific Highway in Eureka California.