Each breath of salt air carries with it a heady mixture to delight the senses. The aroma of delicious pastries wafting from the Greek bakeries that line the waterfront, a taste of gyros and pastitso from the many restaurants sandwiched in between the souvenir shops, and the not-unpleasant smell of fishing boats and nets drying in the sun. Overhead gulls cry out, while the creak of mooring lines and the sounds of fishermen calling out to each other  as they clean their catches and tend to deck chores can be heard. Welcome to Tarpon Springs, a hidden treasure on Florida’s Gulf coast.

Wealthy visitors from up north discovered Tarpon Springs as a winter vacation destination in the late 1800s and built luxurious estates along Spring Bayou. Much of the town’s Victorian influence came from this period, when stately homes and business buildings rivaled anything found in other rich playgrounds. These first “snowbirds” left a mark on the town that remains today.

For generations Greek fisherman from Tarpon Springs have harvested sponges from the Gulf of Mexico, creating a thriving industry and earning the busy little fishing town the title of Sponge Capital of the World.

Though sponges were being harvested from nearby waters since the mid-1800s, local people say the Tarpon Spring sponge industry began on June 18, 1905. Prior to that, sponge fishermen from Cuba, the Bahamas, and Key West used small boats and glass bottomed buckets to spear sponges or used long poles to pull them lose from shallow waters. They would haul their catches to shore to dry them, then loaded them back on boats to take home and sell.

One day John Cheney, a banker from Philadelphia, stood on the docks at Key West watching spongers unload their cargo and recognized an opportunity. He built warehouses at Tarpon Springs and it soon became the leading market for the sponge fishermen to sell their catches.

Demosthenes Kavasilas and Stylianos Besis, Greek sponge divers from the Mediterranean Sea were the first to dive for sponges in the Gulf, and were amazed at what they discovered. An underwater wonderland where hundreds of fish of every kind swam through thousands of corals of every color and shape, multi-colored peacock feathers of the sea in lavish natural underwater gardens. And sponges. Thousands and thousands of sponges. Vast acres of sponges just waiting to be harvested. On that first excursion the divers sent up baskets filled with sponges every ten minutes. By the end of the day the boat was filled with wool sponges, the best and sturdiest sponges in the world. An underwater treasure had been found that would rival any pirate’s sunken booty ever dreamed of.

With the success of that first harvest, the call went out for more boats and more divers. Advertisements in Greece brought 500 young divers by the end of 1905. Among the early leaders of the industry was John Cocoris, the first Greek to move to Tarpon Springs permanently. He and his brothers set up an operation using a boat they christened Hope, outfitted it with the most up to date equipment, and set out to sea on June 18, 1905. Using hard hat diving suits and lifelines to supply oxygen to the men working underwater, Hope began working the deep water where earlier spongers were not equipped to venture.

Their success was immediate, and soon the word had spread. Greek sponge fishermen flocked into Tarpon Springs, whole fleets of fishing ships came from the Mediterranean to get in on the action.  Many of those first spongers were single men, or those who left their families behind while they came to make their fortunes. Many took the money they made and returned home, but others stayed on to make a new life in this new land, and soon their families followed. With them came a strong Greek heritage and traditions. Greek restaurants, coffee houses, taverns and groceries opened and the little fishing port became a busy place.

Traders came to the Sponge Exchange from all over the world to participate in twice-weekly auctions, and both the traders and fishermen prospered. For decades the sponge industry thrived, and Tarpon Springs thrived along with it. Things began to change in the 1940s with the development of synthetic sponges, along with a marine bacteria that began to destroy the sponge beds. The sponge industry went into a nosedive that took four decades to recover from. Things began to turn around in 1985 when Hurricane Elena ripped through the area. Following the storm, the sponge beds mysteriously began to produce again. About the same time the Tarpon Springs sponge beds began to come back to life, the sponge industry in the Mediterranean Sea began to fail due to pollution. These days about 85 percent of the Tarpon Springs sponge harvest supplies the European market.

Sponge boats from the Tarpon Springs fleet travel as far as 125 miles into the Gulf of Mexico, where divers harvest sponges as deep as 150 feet. It is not uncommon for a boat to bring in $12,000 worth of sponges on a typical trip, and the crew works on shares, their percentage based on their jobs and seniority.

Over time the equipment has changed. The boats are bigger and better equipped, and modern scuba equipment has replaced the old time hard hats and air lines divers once used. These days the sponge industry is faced with a new problem. Not a shortage of sponges to be harvested, but rather a shortage of qualified divers. Local men have found other opportunities that pay better with less danger. Lately sponge boats have had to hire divers from Greece again, in a return to earlier days when  young men crossed the ocean to work the Gulf of Mexico.

Today the sponge industry is still strong, as is shrimping, and boats from Tarpon Springs still harvest the riches the Gulf of Mexico holds. Tourism is just as important, as visitors from all over the country come to Tarpon Springs to explore the old sponge docks, dine in ethnic restaurants, and soak up the Greek culture that is still a strong influence. Shops line the street across from the sponge docks, selling everything from pastries to sponges and souvenirs. One of our favorites is the Greek Family Restaurant, where the baklava is to die for.

A great place to begin your visit to Tarpon Springs is at the free Sponge Museum, located right on the docks. Here you can see displays on the sponge diving industry, as well as a video of the history of Tarpon Springs.  The museum also includes a nice gift shop, where you can purchase sponges and souvenirs.

Two companies offer low cost excursions from the docks, and both are well worth your time and the small cost. St. Nicholas Boat Line takes visitors on a half-hour cruise past the historic sponge docks while a guide explains the history of the sponge industry. Along the way a diver suits up in traditional hard hat diving equipment and descends under water to bring back a raw sponge, which is wrapped in a slimy black membrane until it is cleaned and processed. Cost of the cruise is just $5 each for adults, $2 for children ages 6 to 12, and free for younger children. Tour cruises are scheduled seven days a week. For more information, call 727-942-6425.

Another tour we enjoyed was with Sun Line Cruises, a 75 minute excursion of the Anclote River and out into the Gulf of Mexico. Our guide was a professional naturalist, who pointed out birds and shore animals, told us about the history and ecology of the region, and kept everyone entertained with interesting anecdotes and bits of trivia. At $10 each, the trip was a wonderful value and a lot of fun. Sun Line Cruises can be reached at 727-944-4468, or on the Internet at www.sunlinecruises.com.

Another popular attraction along the waterfront is the Tarpon Springs Aquarium, with its 120,000 gallon reef-shark exhibit, baby shark and stingray feeding tank, live coral reef and other exhibits.

While the waterfront is a great place to spend a day, there is lots more to see and do in Tarpon Springs. The town’s Victorian past is evidenced in lovely homes and commercial buildings, many of which are home to antique shops, art galleries, studios, cafes, bed and breakfasts, and specialty shops. St. Nicholas Greek Orthodox Cathedral featuring 60 tons of Greek marble, is a must see.

Another big draw locally are the manatee, which come into the Tarpon Springs area to spend the winter in the warm water of the local springs. These aquatic mammals are popular with visitors and locals alike. Bird watchers can see dozens, if not hundreds, of different species throughout the region.

Tarpon Springs has two beachfront parks, and water skiing, boating, and fishing draw many people to the area. The Pinellas Trail follows an old railway route from Tarpon Springs to St. Petersburg, offering bikers, skaters, joggers, and hikers a place to exercise and have fun.

There are festivals held throughout the year, the most popular being the Feast of the Epiphany in January, when young boys dive into the water to retrieve a blessed cross tossed below the surface by the Greek Orthodox priest. The celebration lasts all day long, and includes Greek entertainment, music, food, dancing, and the blessing of the sponge fleet.

Whether you come for the delicious Greek food, to explore the old sponge docks, to try your luck fishing the waters of the Gulf of Mexico, or to take part in one of the many local festivals, you are guaranteed to have a wonderful time in Tarpon Springs. It is a place we love and will return to time and again in our travels. Visit once, and I think you will too.

Tarpon Springs is located on U.S. Highway 19 on Florida’s Gulf Coast, and north of the Tampa-St. Petersburg area. There are many RV parks throughout the region. Parking can be limited in town, so it is best to drive your tow vehicle when you visit. For more information, log onto the Internet and go to www.ci-tarpon-springs.fl.us.

Marvel at Ancient Sand Dunes Along Lake Michigan Previous
Need an HDMI Cable? Don't Get Ripped Off! Next 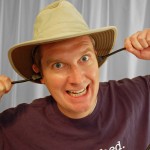