Dear RV Doc,
I own a 36-foot motorhome. The day before we left on our last trip, the temperature here dipped to about 16-degrees so I kept the heater on in the coach and placed a small space heater in the bay where all the water lines are. The morning we left all was fine. I didn’t see any sign of freezing so away we went.

Upon our arrival at our destination, I did a more detailed inspection and found that the strainer basket part of the water pump had separated slightly from the water pump which caused a small leak. There was no damage to it so I simply reinstalled the part and there were no more leaks. The rest of the trip was uneventful.

When we returned I began to re-winterize the RV using a non-toxic RV antifreeze by disconnecting the supply line from the pump and using a tube in the bottle of anti-freeze. I allow the pump to pull the antifreeze into the water lines of the coach, then I turn on each faucet until the pink stuff comes out. Before any of that, of course, the first thing I do is after draining the water from the system and water heater is put the water heater in the by-pass mode.After putting it in the by-pass mode I noticed that the pump pulled all of the anti-freeze out of the bottle before shutting off so I checked to see if any of the faucets were in the open position, they were not.When I walked around to the other side of the coach I saw the antifreeze running out of the water heater (the drain plug was still out).

My question is do these valves go bad? I disconnected the lines from the valve and using a flash light looked into the valve as I would turn it from normal to by pass and it seemed to be working fine, but for some reason the antifreeze just kept going into the water heater. Can you tell me what may have happened? Did the freeze some how affect this? As far as I could tell we never had anything freezing inside the coach. Thanks for your help,
– James McAdam, (Northeast, TN)

James, you certainly have the correct procedure down for traveling and winterizing during cold weather. I’m happy to hear you were able to enjoy your destination, at least, event-free.

As for the bypass system; some plastic valves used in a few bypass kits can be prone to early demise due to the effects of cold and heat. I’ve not heard of any problems with brass valves in such applications, but the cheaper, plastic ones worry me. It’s plausible that the cold and heat extremes have damaged the seals inside the valves thereby rendering them inoperable. Warping or distorting of the plastic valve body may also contribute to a faulty valve. Perhaps, even, a bit of dirt or hard calcium particle migrated through the system into the valve and damaged the seal.

If your bypass valves are indeed made of plastic, I would strongly suggest you replace them with brass valves. This should eliminate this from happening again. Another possibility, though I doubt it happened, is that the valves were not fully closed during your re-winterization. You appear to be acutely aware of the process, so I would put my money on faulty valves. 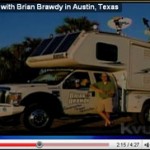 Mark My Words: May – Plumbing and Electrical Issues, and Some General RVing Tips