Check out these highlights of RV-related news, events and video from the past two weeks.

1. Fleetwood RV, Inc. Names Indiana New Headquarters: Officials with American Industrial Partners, the new owners of Fleetwood RV, announced the company is moving its headquarters to Decatur. The move will create 300 new jobs and retain more than 600 of the current workforce. Fleetwood officials said they plan to spend $7.4 million on building improvements, and re-tooling investments. Officials also said the high-caliber workforce and governor Mitch Daniels’ promise of up to $9 million in performance based credits and up to $100,000 in training grants made the decision to consolidate their California and Pennsylvania offices to the Hoosier state an easy decision. 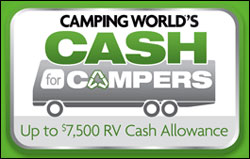 2. Camping World Launches Cash for Campers: Camping World Retailers have created a self funded equivalent to the government program “Cash for Clunkers” by launching a Cash Allowance program of up to $7500 for the trade in of specific qualifying RVs.

3. New RVs Expand Options in Downsized Choices: Winnebago Industries is going a step further in the effort to produce downsized RV choices, with the introduction of its all-new 2010 Via Class A motor home. The Via and its Itasca equivalent, the Reyo, are based on the Sprinter “cowl” chassis that’s currently being imported exclusively by Winnebago. This chassis allows the company to design its entire coach from the ground up, as is typical for any Class A motorhome, instead of working with the Sprinter cab or body features used on the earlier models. 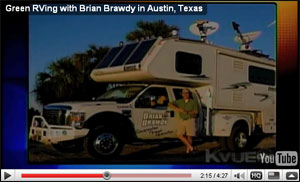 4. Video: Brian Brawdy Talks About Going Green in Your RV: Outdoor Adventure Expert Brian Brawdy discusses the benefits of Greening your RV and shares his message of Conservation thru Exploration with KVUE in Austin, Texas.

5. Homeschooling Kids on the Road: Read why RV trips are probably the easiest for homeschoolers to handle. From short-term to extended RV trips, read about the experiences of other families traveling together. 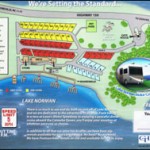