One of the most frustrating RV-related events to experience is an intermittent issue. That is, a fault that comes and goes with no rhyme or reason. It never seems to happen while the vehicle’s in for service, making it impossible for diagnosis or correct. After all, you can’t fix it if it isn’t broken.

One of the more common intermittent failures seems to occur in the rear-vision monitor. Brief loss of picture can be experienced if a poor connection is present with any of the video-feed cables. This type of issue usually exhibits an on-again, off-again, pattern while traversing rough road surfaces. Often, the dashboard can cycle this fault even when one strikes the dashboard.

Obviously, this is a major problem. Those of us with larger motorhomes depend on this extra eye when backing up and when traveling. Loss of this image poses a safety issue, especially  when you’ve come to depend on its steady, reliable function.

Fortunately, you can do some troubleshooting on your own. So, what  about a failure that does not react to significant movements or vibrations? Does that indicate a more serious internal issue? Well, perhaps not. Generally a electronic component failure is not intermittent; it either works or does not. An on/off nature tends more often to relate to a loose or highly resistant connection.

Backup Monitor Failure — a Clear Picture on the Problem

So, let’s try and fix this annoying problem. To do this we need to remove the monitor or open the dash face just enough to access the back of the unit and the connections behind. Identify the video input cable and move it about. If the picture resembles the issue, it is almost certainly a video-connection or cable-resistance problem. The video connection is generally a coaxial cable with an RCA-type plug-in. If it is snugly fit to the fitting in the monitor, follow the coaxial cable from the monitor. It usually is connected to a video selector or like junction. It has a similar RCA connector, so you want to assure that it is also secure.

If both ends appear to have a secure connection and vibration seems to have little to do with the issue, you should replace the cable. Cable damage can occur during the vehicle manufacturing. Replace it with an RCA-type plug audio cable. These are smaller and much easier to install and will work every bit as good as the coaxial it is replacing.

Working on this diligently while taking your time can prove successful. These types of projects can be done by relatively inexperienced people, it really is not rocket science. The accomplishment of fixing such an issue can be quite gratifying. Most important, the benefits of increased safety and security are immeasurable. And, of course, there’s the bonus of not having to pay a repair fee.

So, go ahead and jump in the deep end!

Get a full selection of backup monitors and accessories at Camping World.

Peter Mercer — With a D.I.Y Repair 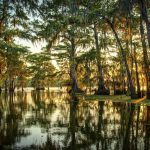 Louisiana: An All-You-Can-Eat Buffet of Adventures Previous
Baseball Legends are a Short Drive from Milton KOA Next