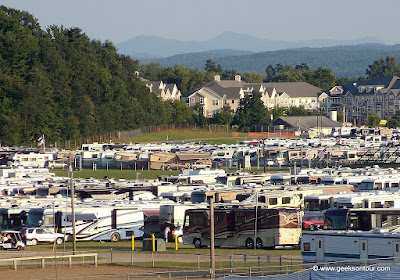 We spent the past week in Essex Junction Vermont at the FMCA Northeast Area Rally (NEAR.)  To our surprise and delight, there was Wi-Fi available right at our parking spot.  We could tell it came from the fairgrounds since it was named, “CVFairmn1.”  We were at the Champlain Valley Fairgrounds.  We like taking advantage of available Wi-Fi so as to avoid going over our bandwidth allotment on our Verizon contract.

We connected right up and to our double surprise it was blazing fast.  And, I do mean blazing.

Until all the coaches got parked!  The Wi-Fi slowed to a crawl and became unusable.  We had to go back to our Verizon connection.

Then, when we taught our Google Earth seminar, we tried the Wi-Fi again.  Google Earth has some pretty hefty bandwidth requirements.  There are some things we just can’t show if we’re using our tethered cellphone.

The Wi-Fi worked great!  We zoomed around Google Earth, turned on several layers, and still could dive into a Street View without a hiccup.  This was on the same CVFair network, so we tried it again when we got back home.  No good.  It was so bad that it refused to display a web page.  The connection showed as 5 bars, and the connection speed (as opposed to the throughput speed) was fine – it wasn’t a signal issue.

We waited a couple hours and tried it again … we were back to high speed.  Thrilling high speed!  For those of you who like numbers,  I did a speed test with TestMy.net and got 4.2 Mbps on the Wi-Fi as opposed to .5 Mbps on Verizon.

We think it was an individual connecting to the network, and their computer had the kind of virus that turns it into a ‘zombie.’  These ‘zombies’ are being controlled by some spammer and are programmed to send out thousands of spam messages.  When an infected computer connects to a Wi-Fi hotspot, it starts sending these spam messages and simply takes over all the available bandwidth – leaving none for the rest of us.  The owner of the computer is usually completely unaware, cursing the slow Wi-Fi along with everyone else.

As soon as the zombie disconnects from the network – all is well.

What can you do about this?  Not much. But I think it’s still good for you to know.  If you’re in a Wi-Fi hotspot where there is a support phone number to call – that often means there is a system administrator who can monitor the activity and kick off an offending user.  It’s certainly worth a call.

By coincidence, we also heard this week from a friend staying in a park that uses a satellite dish as the Internet source to their Wi-Fi hotspot.  One person connected to the network, downloading full length movies, pushed the network over the FAP (Fair Access Policy) limits.  This essentially eliminates Internet service for the whole network for 24 hours. To understand more, you can watch this video on FAP.

Alexa Your RV This Holiday and Un-limit Your Data!