Most gasoline today contains ethanol additives. The ethanol is intended to reduce carbon emissions. Unfortunately, as with so many mandates from our benevolent overlords, there are a few unintended side effects. This product (http://goo.gl/x09tjn) can help save your engines from ethanol fuel that causes corrosion and clogged fuel lines while saving the world. Ethanol is especially hard on small engines like RV generators. You don’t want to let it sit inside your engine untreated throughout the winter.

As the poet John Michael (Ozzy) Osbourne once observed, “Good intentions pave the way to Hell.” (I’m afraid ol’ Ozzy ripped off St. Bernard of Clairvaux who originally coined the phrase back in 1150. But I digress.)

In the old days, we bought products that were built to last. How quaint.

Today? The new approach works kind of like the new math:

But hey, it’s good for the environment – err, right?

We use Sta-bil fuel additive in an effort to keep our equipment out of landfills. Sta-bil has been around for a long time, but it has become more popular as the percentage of ethanol in our fuel has increased.

Sometimes for fun I balance a bottle of Sta-bil atop of a bottle of gasoil atop SEEMORE’s tailgate. It’s just a hobby of mine.

My wife and I own several pieces of gasoline powered equipment. Some are RV camping related, while others are not.

Here’s a partial list: a 3000 Watt inverter generator we use primarily for RV camping, a lawnmower, a weed eater, a leaf blower, and a pressure washer. Each piece of gear contains a gasoline engine that’s often filled with ethanol laden fuel. As old fuel ages in these less sophisticated small engines, all sorts of problems develop.

STA-BIL is key to saving small engines like generators, lawn mowers, and the like from the harmful effects of ethanol. (Click the pic to get some!)

Why is fuel aging in the gear? Depending on the season, there are times when this equipment is not used very much. For example, there’s not much demand for our lawnmower in the middle of winter. When we are not out RV camping, our fancy generator may go months without seeing much action. If ethanol fuel sits in these engines for too long, it may cause all sort of problems.

Fuel starts to break down within 30-60 days of storage.  As the ethanol deteriorates, it leaves behind residue and water. Good luck starting a leaf blower after it’s been stored with untreated ethanol fuel for a few months. We always want our RV generator to fire on the first crank, but after soaking its innards in old ethanol for a few months it may become a 150-pound door stop.

In the old days we might drain the fuel from all of this gear, which would be time consuming, messy, and a pain in the buttocks area. But in the Ethanol Age, it would also be a waste of time. An empty fuel tank (especially one with residual traces of ethanol) would just invite corrosion. When you empty the tank of fuel, the ethanol residue and gum stays behind. It’s actually better to leave fuel in the gear and treat that fuel with an additive. That’s why we use Sta-bil. (::cue Hallelujah chorus::) 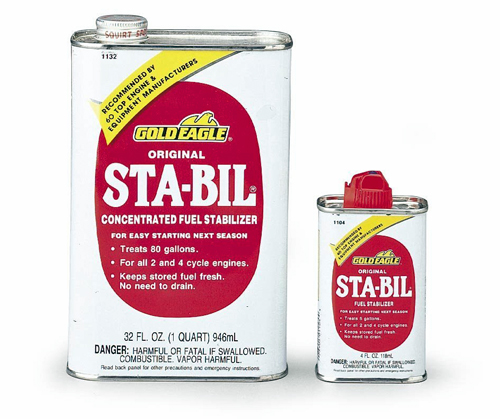 STA-BIL has been around for a while, but is becoming increasingly popular since our gasoline started boasting more corn. (Click the pic to get some!)

This delightful fuel stabilizer is the Huma Abedin to ethanol’s Anthony Weiner.

Sta-bil fuel stabilizer keeps fuel fresh for easy starts once we pull these items out of storage. It also claims to prolong engine life due to its variety of positive qualities. Sta-bil removes water to prevent corrosion. It cleans carburetors and fuel injectors. It also protects engines from gum and varnish rust.

It’s easy to use. There’s no need to drain the existing fuel from the engine. You just add it to the tank in the proper dosage.

Many people swear by this product. In fact, some add a little to their automotive gasoline engines on every fill-up, and not just when they’re placing cars into storage. Many of the protective benefits should be realized even if the car and/or engine is in service. Personally, I just add it to gasoline engines that I know won’t be used for a while. 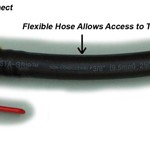