Lately our 3000 Watt generator has been having trouble powering our air-conditioning unit. It runs the A/C for a while, then overloads. So we’re now using “Sea Foam” fuel additive with the generator. Hopefully this will clean out whatever carbon & ethanol gunk might be clogging the carburetor. This begs the question: what the heck is Sea Foam?

Sea Foam has been been around since 1942. Many people swear by it. It’s a 100% pure petroleum product for use in all gasoline and diesel engines, including 2 and 4-cycle jobs like lawnmowers and generators and motorcycles. Like many fuel additives, it’s so easy to use, even I can do it.

Sound familiar? Yes, these benefits are similar to those offered by Sta-bil, which we add to our equipment before putting it in storage. However, these products are similar but different. The focus of Sea Foam is upon the cleaning benefits, whereas Sta-bil is more about stabilizing the fuel. I think it makes sense to own both.

“Sea Foam” – it’s not just for boats any more. (Click the pic for more info.)

I’m particularly interested in cleaning our generator, which may be subject to bits of ethanol residue from its time in storage, not to mention carbon in the carb. Early test results have been very positive.

We added two ounces of Sea Foam into our generator fuel tank and turned on our Airstream’s A/C. At first, the generator had the same trouble running the A/C as it had previously. It would work for a while and then veer into overload.

However, about half an hour after the Sea Foam treatment, the generator began running noticeably better. As the Sea Foam dispersed throughout the fuel, it seemed to take effect. In fact, our generator was able to power our A/C without overloading. Color me impressed.

The first test was conducted at night. The next test will be during daytime to see how our generator fares when the outside temperatures are hotter. But so far, so good. I am impressed by the performance of Sea Foam and eventually intend to test it on our Ford F250 diesel truck SEEMORE.

One ounce treats one gallon of fuel, so one bottle goes a long way with a generator. (Click the pic for more info.) 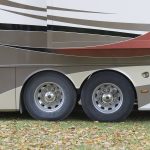 Diesel Engine Etiquette: Keeping it Down

The Secret to Better RV Sleep

From "Shark Tank"… to your Pickup Truck