Scarcely four percent of the land in Texas is publicly owned, but because the state is so big, that leaves plenty of places to go for unforgettable Texas RV trips. There are plenty of big chunks of public land to explore. Along the Rio Grande River in the Chihuahuan Desert, for instance, Big Bend National Park is larger than the entire state of Rhode Island and Padre Island on the Gulf Coast. With 100 miles of undeveloped sand that you can pull your RV right onto, it is the nation’s largest barrier island.

Texas RVers can explore Texas and settle into any natural environment they desire. If it isn’t the beach sand or the desert, there are the Piney Woods of East Texas where the Big Thicket became the first national preserve in the United States National Park Service. Across the state, more than 100 artificial reservoirs have been created for recreation, so you are never too far (nothing is really “close” in Texas) from a waterside camp site.

The Lone Star State is home to six of the largest cities in America and RV parks in Texas are conveniently perched on their perimeters to experience them all. In the Metroplex, that means easy access to the historic cowtown of Fort Worth and the swagger of modern Dallas. The State Fair of Texas is so big it takes 24 days each fall to fit it all in. Over in Houston, you can explore the heritage of America’s 60-year old space program.

Hill Country is studded with water-based state parks – there are more than 800 natural springs percolating under the rolling hillsides. The most popular are along the Pedernales and Guadalupe rivers and Enchanted Rock, an iceberg of pink granite that requires a walk on bare rock to reach its broad 425-foot high summit. Hill Country is also where to head for fields of storied Texas blue bonnets in the spring – the 12-inch wildflowers even have their own website to make finding them easier.

Don’t be disappointed if you can’t fit it all in on your Texas RV Trip – “Everything is Bigger in Texas,” you know. 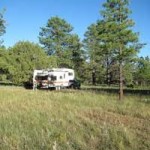 Have Your Next Adventure in Carlsbad, New Mexico at Bud’s Place RV Park & Cabins

San Antonio: the Alamo, Barbecue and a Beautiful River