Here are some Energy efficient A/C cooling and a few hints and things I’ve done in setting my 5’er up for the long hot dog days of summer. Now I may be gone during some of this time, but the 5’er will remain cooler!

Now the biggie and yep another real big time money saver! Being in the valley or anywhere where it’s over 100 like it got there some days for several days on end. I only had the one Carrier Air V that came with the 5’er. 13,500 BTU A/C was NOT enough for that kind of heat. I knew eventually I’d have to ad another A/C. I did my research as usual and went the unconventional route (as I usually do). Another RV type A/C added over the bedroom would run after cost and install around $900 to $1,0000.

After extensive research AND with great apprehension I bought a Amcor KF 9000E portable A/C at Home Depot for just at $300. 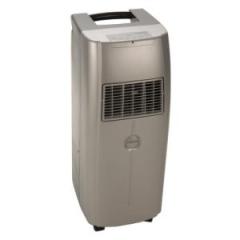 I had heard these things were noisy and didn’t work well so I figured I could take it back if I had to, but also had read raving reports too. Let me tell you this thing WORKS! It is QUIET! A 9000 BTU A/C that really pumps out the cold air and runs on only 7.9 amps and 830 watts!. Roof top A/C’s usually run around 1800 watts! The drawback is it has a 4” hose that has to be vented to the outside. Mine was done easily through one of the windows with the window kit that came with it. It vents out the hot air. Due to low energy consumption I’ll use this as the primary A/C and kick in the roof unit when needed. It takes up a very amazingly small footprint of space except for the 4” exhaust hose of 12”W x15”Dx30”H. It also serves as quite a dehumidifier and no water containers to drain! There are several models and makes to choose from for this project, i just listed mine here.

This project saved me at least $700 not to mention I paid for electric there so being it only uses 7.9 amps (830 watts) that alone saved me a lot more! So the really super hot days there of summer I’m able to keep the rig pretty darn cool and in a very energy efficient manner.

Well it heated up as predicted. My little portable A/C did not fail me at all! Below are some readings I took throughout the day mainly running only the portable Amcor 9000. I did a couple times fire up the roof top for short periods to see the difference, but for the most part that little portable job did its thing all by itself. I’m impressed. See some results…..

As the evening wore on and by late evening temps inside were down to the low 70’s with the portable a/c on only. I talked to a friend and he reminded me I have a Kill O Watt meter! I plugged the Amcor into it and it average around 7.5 amps of power and around 800 watts. It used a whopping .95 KWH (just under 1 KWH)! Man, now that’s pretty energy efficient! Especially compared to the roof unit! My base line charge for electric is 12.4 cents per KWH so basically the unit costs approx. $ .12 per hour to run. If I ran it 24/7 it would cost $1.93 x 30 days = $57.90 per month. The roof top burns at least twice that.

I’m was impressed and very relieved. Here I was going to use this to augment my roof top unit and in all reality it went the other way! I only ran my roof top a/c for a couple hours the whole day and the rest of the time my Amcor did its thing and at half the energy as the roof top unit! My buddy Walter picked one up for his bedroom at home and proved to be a winner at night in his bedroom lowering his bill considerably. I did start the Amcor portable early in the morning so as not to let the rig heat up making things work harder later to get it cooled back down and that evidently paid off .

A very important note to make here is …The Amcor only draws 7.9 amps making it usable with NO problems with my Honda 2000 generator! Now I like that a lot! With some very hot temps there the test has eased my mind knowing I’ll be comfortable. On the 1st I got my first electric bill (for 2 weeks) and was interesting to see and my monthly bill was a LOT lower than the previous month. I could certainly ad some to that later in summer during the dog days of summer. How much remained to be seen. Overall this has been a great project with huge benefits! I had logged my final results in my RV Notebook software for reference during testing so I could go back and compare when I got my bill. Man was I a happy camper! My budget section of my RV Notebook was just as happy! My RV notebook has saved the day many times! 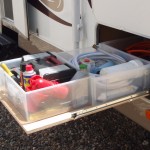 Solving an Electrical Enigma and Putting a Stop to Braking Problems