Water, Water everywhere and not a drop to drink. The final chapter.

We are going to finish the discussion of some of the most common water bore illnesses.   We have discussed Giardia and E. Coli.  Sometimes known as beaver fever and travelers trots respectively.  Today we are going to learn about the organism called Cryptosporidium which also causes a diarrheal illness called Cryptosporidiosis.  This organism wasn’t discovered until 1976, unlike E. Coli which was observed with some of the most primitive microscopes over a hundred years ago.  It has been found to be one of the most common waterborne diseases and is found worldwide.

Once again, it is transferred by the fecal – oral route, usually by drinking infected water or by poor sanitation practices and not washing hands.  It is most hardy and easily transmitted as a cyst or the “Egg” form, and, if it is taken into your body, it hatches and goes into the intestinal tissue.  Now this organism is not much of a danger to those with a good immune system.  In those people, after a brief period of diarrhea, the patient often feels better and and their immune system kills the organism.  However, the patients with weak or compromised immune systems (the very young, elderly, organ transplant patients, patients taking medications that effect the immune system and Immunodeficiency diseases), the body cannot kill the organism, and the infection can last for months or years.  While healthy people have a 2 to 4 week bout of watery diarrhea, these patients can have acute/persistent diarrhea that is watery with some mucus (or lining from the stomach), stomach pain, cramps and fever, nausea, vomiting, dehydration, and limited uptake of food.

This organism is found in many of the fresh water bodies of the United States and can be carried by almost any mammal, especially Humans, dogs, cats, cattle, sheep and goats.  There is now evidence that it has moved to cold-blooded reptiles when many Leopard gecko breeders came down with it.  It has now been found in lizards, iguanas, tortoises and snakes.  So almost any fecal material should be suspected as being possibly infected.

Now once again, what can we do to avoid this disease?  To be honest, this disease is carried often by humans and water parks and pools are common sources of infection, as well as some very old, municipal water supplies that do not have some of the more modern purification methods.  If you go swimming, try not to drink the water and wash your hands before handling food or anything that will go in your mouth.  Let it also be noted that, as a cyst, it is very resistant to chlorine disinfection.  It is easily killed by Ultraviolet light purifiers and can be filtered out again by 1 micron filters.  It also can be killed by boiling your water.

For the Healthy patient, treatment usually can be handled by over the counter diarrhea medications.  For those that do not have as robust systems, the patient can have symptoms for months or years and must be treated in the hospital.  Now, I am sure most of you are fine and healthy, but I can guarantee that if you live long enough you will become elderly (One of my patients when I ask him how to live to be over a hundred like him told me to “Keep breathing and it will happen sooner or later”).

So, what have we learned about Waterborne illness in the past few weeks?  Well, I am washing my hands a whole lot more than I used to!  I am going to get a Water Filter to take camping because this is the easiest way to purify your  drinking water.  I am also going to start disinfecting my water tanks more because, even if you can’t use enough Chlorine to kill these organisms and still use it for drinking water (it would make you ill), you can kill them in your tanks and lines then flush them out thoroughly, and, if you use good water, you should be safe.  I am also going to be much, much more careful around the DUMP STATION!  I plan on getting LOTS of disposable gloves and a bottle of pure bleach to spray everything down and generally being much more careful not to touch anything that does not need to be touched and cleaning well afterwards.

So, when the fecal matter strikes the rotating blades, you should always suspect water these days no matter how cool and clean it looks.  You should also remember that, if you can’t get rid of your diarrhea by over the counter treatment, do not delay in seeking care at a local hospital if you are becoming dehydrated, having bloody stools or other debilitating symptoms.  I also hope I never have to see any of you professionally for these problems! 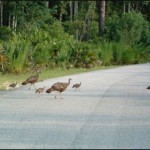