Tech- Troubleshooting with a test light

I hope everyone has been following Larry Cadman’s great series on electrical theory and multimeters , there is a lot of great information in them- good, solid theory, backed up with practical applications. A multimeter is an essential piece of test equipment.

But…. sometimes “low tech” is faster, better and easier, which is why one of the first electrical tools I grab when troubleshooting a 12 volt system is my trusty 12 volt test light.

Available for very little money, there are times when a simple test light is mandatory, and will find problems that escape even the most expensive meters.

Along with a few simple accessories, I’ll show you several ways to use this workhorse of the tool box

The test light often is better for troubleshooting in that it will add an electrical load on the circuit, which can pinpoint bad connections easier than a multimeter, which has a near zero load- in other words, often a meter will show voltage through a bad connection, but with the load of a test light on it you can find the bad connection much more easily.The one caveat here is that generally, you should never use a test light on the output of a circuit board . The most common mistake would be testing the valve output of a water heater ignition board (on edit- as Jerry points out in a comment, a chassis or engine computer would certainly fall in this category).

The “basic” way of using a test light is to simply hook the ground clip to a good known ground, and touch the tip to the point you are looking for power on- in the illustration, I have the light grounded to the negative post of a 12 volt fuse panel, and I’m checking a fuse to make sure power is passing through it.

A habit that you should always get in to is testing the light itself on a known good power source before you check the problem area you are working on (yes, I have chased a bad connection for a while only to find that my test light bulb was burned out :)).

Along with the basic test light, I use a couple of jumper wires. The small jumpers shown in the first picture were purchased at Radio Shack. The second type of jumper I use is simply a jumper cables. (I have separated my jumper cables to be 2 separate leads, though you don’t need to do this). This means I can run the big jumper to the frame, or even battery negative, hook the ground clamp of the test light to the other end of the big jumper cable, and you know you have a good ground. Using the light like this is especially handy when diagnosing running or tail light problems, which are often due to bad grounds.

When testing running or tail lights, I test the “hot” lead first, if I get a light there, I then touch the test light to the grounded side. If the ground is bad, both the test light and running light will light up at roughly half brightness (very roughly- a lot has to do with how many lights are going to light up when you do this!).

The other way I use a test light is to check for short circuits. This test is done by putting the test light in place of the fuse. I use the small Radio Shack jumpers to do this. If you turn off all of the lights or loads on the circuit being tested, the light will go out when you have found the short, but it will light brightly while the short is still there.

I’ll give an example of finding 12 volt shorts in a job I had a few weeks ago..

One 12 volt circuit in a coach would blow the 15 amp fuse. I started by determining what was on that circuit (it was the bathroom light and fan, a light in a hallway, range hood, and a number of wall and ceiling lights aft of that.)

I first started in the bathroom, which was right beside the fuse panel. I removed the trim from around the roof vent/fan combo, disconnected the hot wires there (there were 2 hot wires plus the wire to the fan). The test light went out, so I hooked one of the hot wires to the fan- nothing, hooked the other to the fan, and the fan started at ~1/2 speed (because of the test light in the circuit).

This told me the wiring between the fuse panel and the first connection was good. I then hooked those wires back up and moved to the range hood- simply because it was the easiest to access the wires in, and was about 1/2 way through the rest of the circuit. Following the same method I used at the bath fan, I established the short was after that point, so I went to the next light fixture in line, unhooked the wires, and the short was still there. Using the test light in place of the fuse made finding the sort fast and easy, and I didn’t use up any more fuses. (Fixing the short was still a job, disassembling the cabinet that the wires ran through, but at least I had it narrowed down to a single cabinet).

One way to use a test light that I always try to avoid is piercing insulation with them. I know often there is just no other way to do it, and they do make special testers which allow you to avoid piercing your finger instead of the wire, but when ever you have to pierce the insulation, you need to seal the hole to avoid problems down the line.

I hope this gives you an idea on how handy this inexpensive testing tool can be (along with a few accessories). It is something no tool kit should be without!

Tow Cars and Towables – Part 3 – Bernice’s Tips Previous
The Last Word On Shocks, I Think. Next

Get the Lowdown on Window Shades and Tweak Awning Tension

A Dad Outside: A Camping Legacy for Our Children at Carpinteria SB 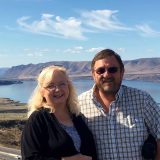