On a back road in eastern Oklahoma a small state park preserves the cabin of one of the most influential Native Americans of all time.

Little accurate information is available concerning the life of Sequoyah, sometimes known as George Gist or Guess. He was born in the 1760s or 1770s, probably in Tennessee, and was the son of a Cherokee woman and a white or half-breed trader. Sequoyah was raised by his mother in the traditional Cherokee tribal manner and became a silversmith or blacksmith. He never learned to speak or read English, but around 1809 he became interested in writing and printing, which he recognized as a powerful civilizing force.

Sequoyah spent years experimenting with symbols to decipher the Cherokee language. In 1821 he completed a syllabary consisting of 84 characters, each of which represented a syllable. Because it was a phonetic rendition of the language, the syllabary could be learned in a short period of time. Within a few months, thousands of Eastern Cherokee Indians had mastered it and were learning to read and write.

In 1822 Sequoyah traveled to Arkansas to introduce his syllabary to the Western Cherokee. The following year he settled in Arkansas, and in about 1828 he moved with the Western Cherokee to Indian Territory, where he lived for most of his life. It is believed that he died about 1843 or 1844 in Mexico while searching for a band of Cherokee who, according to tribal lore, had migrated to the region in 1721.

Sequoyah’s syllabary had a dramatic impact on Cherokee culture. Before the syllabary, the Cherokee had viewed the white man’s written records as witchcraft. After Sequoyah introduced his syllabary, they were able to codify their laws, adopt a written constitution, better govern and educate themselves, and express their viewpoints in print. Once they became literate in their own language, they could more easily grasp English.

By 1824 the Eastern Cherokee were printing portions of the Bible. Four years later, at their capital in New Echota, Georgia they began publishing the first Indian newspaper, the Cherokee Phoenix. This technology made news and literature available to the older generation, most of whom were fluent only in their native tongue, as well as to younger Cherokee, many of whom had been schooled in English.

Shortly after they adopted Sequoyah’s syllabary, the other Five Civilized Tribes began to formulate their own, and before long all of them could read and write. The syllabaries provided Christian missionaries a means of written communication with the Indians through books, pamphlets, and other religious and educational materials.

Beyond its direct benefits, Sequoyah’s syllabary made possible the preservation of a mass of Cherokee lore in print. Of special interest to ethnologists are the writings of the Cherokee shamans, which provide an unparalleled body of information on an aboriginal religion that was unobtainable from any other American Indian tribe.

Sequoyah’s contribution to the Cherokee Nation has been recognized in many ways. During his lifetime, the U.S. government honored him with a monetary award, and the Cherokee nation granted him a pension and medal. His likeness appeared on a postage stamp and his statue is displayed in Statuary Hall in the U.S. Capitol. His name is immortalized in the giant Sequoia trees of California, and with the world’s other great alphabet inventors on the bronze doors of the Library of Congress.

Sequoyah’s Cabin State Park, near Akin, Oklahoma, preserves the cabin Sequoyah built in 1829. A typical one-room frontier home of hewn logs with stone chimney and fireplace, the cabin has undergone minor restoration. It is enclosed in a stone shelter, which features relics and documents associated with Sequoyah’s life. Near the shelter stands a log structure dating from 1855 that once adjoined the cabin. The historic landmark includes a visitor center, small museum, and picnic area. The parking lot is small, and drivers of large RVs should park elsewhere and drive their tow vehicle or dinghy.

Sequoyah’s Cabin State Park is located on State Route 101 a few miles east of Akin. The park is open Tuesday through Sunday, and is closed on all holidays. Hours seem to be sporadic, so you would be advised to call (918) 775-2413 before visiting. 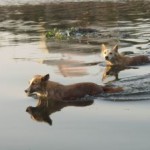 Are You and Your Pet Prepared for a Disaster? Previous
Experience Sacred Ground in South Dakota's Black... Next