When most people come to Yosemite National Park they head for the Yosemite Valley and marvel at the granite cliffs that loom over the merced Valley and have taken the familiar names of El Capitan and Half Dome. They attempt to fit America’s highest waterfalls pouring off the surrounding cliffs into a single frame of their cameras. This is sufficient for most travelers, however RVing Northern California has so much more to offer.

Fortunately for RVers, whether you are setting up base camp in an RV park or hopscotching from campground to campground, there are more than two dozen Good Sam RV parks sprinkled across the region to plan your adventures in Yosemite. The Map View on Good Sam Camping makes it a snap to plan your trip and call an audible or two once you arrive.

One of the best parts about RVing Northern California is the east High Country. It rises to elevations over 13,000 feet. RV parks along Route 395 in Bishop and Mammoth Lakes and Bridgeport serve up easy access to these lands less traveled. Yosemite is also home to the largest living things on earth – the Giant Sequoias. Abraham Lincoln first protected these arboreal cinnamon-colored giants in 1864 when the Mariposa Grove of Giant Sequoias was established. Five miles down the road, celebrated naturalist, John Muir, discovered the Nelder Grove of more than 100 redwood sentinels in 1875.

The Bay Area is another destination that must be approached from the RV campgrounds on the fringes. The east side of the bay, rich in Good Sam parks between San Jose and San Francisco is a good choice from which to launch your adventures of “The City By The Bay” with its cable cars and postcard views from Telegraph Hill across San Francisco Bay to Alcatraz Island and the Golden Gate Bridge.

Fisherman’s Wharf, with it shops and restaurants is one of the busiest tourist destinations anywhere, but is worth the visit if only for the Dungeness crab soup. The season for the West Coast’s most commercially important crustacean does not open until November with an eagerly anticipated celebration along Fisherman’s Wharf. Dodging the passenger ferries to Alcatraz Island is still an active fishing fleet bringing fresh seafood from the Bay Area to the dock for the “catch of the day” specials.

The Golden Gate National Recreation Area incorporates units on both sides of the Golden Gate Bridge along 60 miles of bay and ocean shoreline. The park was cobbled together from a menagerie of out-dated government properties that included forts, a prison, and an airfield. The total area of the urban park is more than twice the size of San Francisco and its surrounding county.

Don’t stop RVing Northern California – just when you think you’ve “seen it all,” there is another road leading to another amazing place. 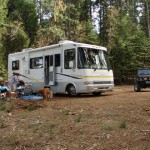 Getting away from it all: Boondocking tips Previous
Top July Fourth RV Parks Next

Welcome and Make Yourself at Home at Country Oaks Campground Kingsland, Georgia