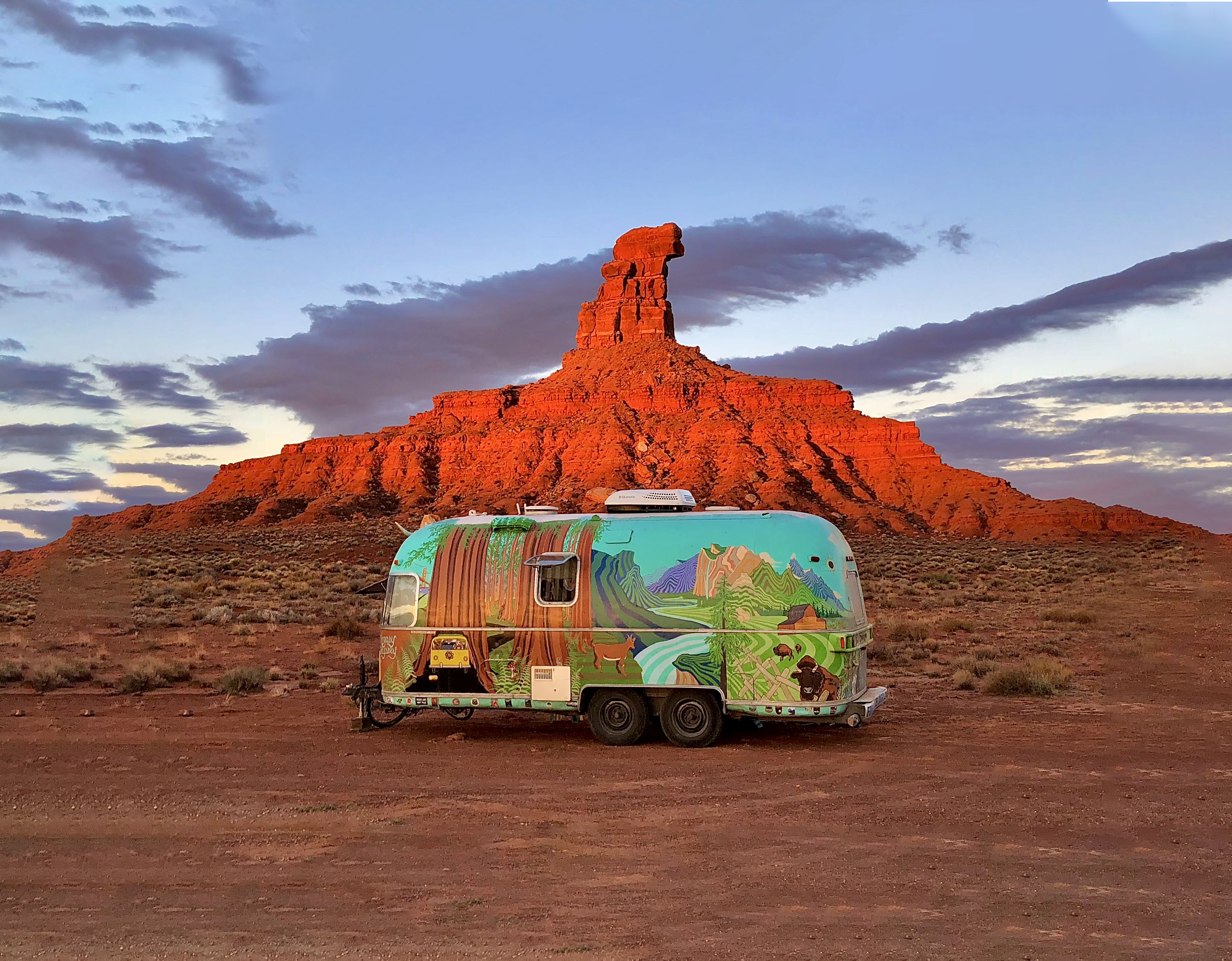 If you’ve been pining for a road trip but avoided traveling this past year the Southwest’s winter season is the perfect time to skip the crowds and spread out across its vast landscape of red rocks, towering hoodoos and desert flora.  From the colorful slot canyons of Utah and petroglyphs of Nevada to the giant saguaro’s of Arizona and Native archeological sites of New Mexico, there are endless places to explore. Besides the dozens of National Parks in the region, the Southwest boasts hundreds of state parks, BLM sites, and National Forest trails with incredible views. 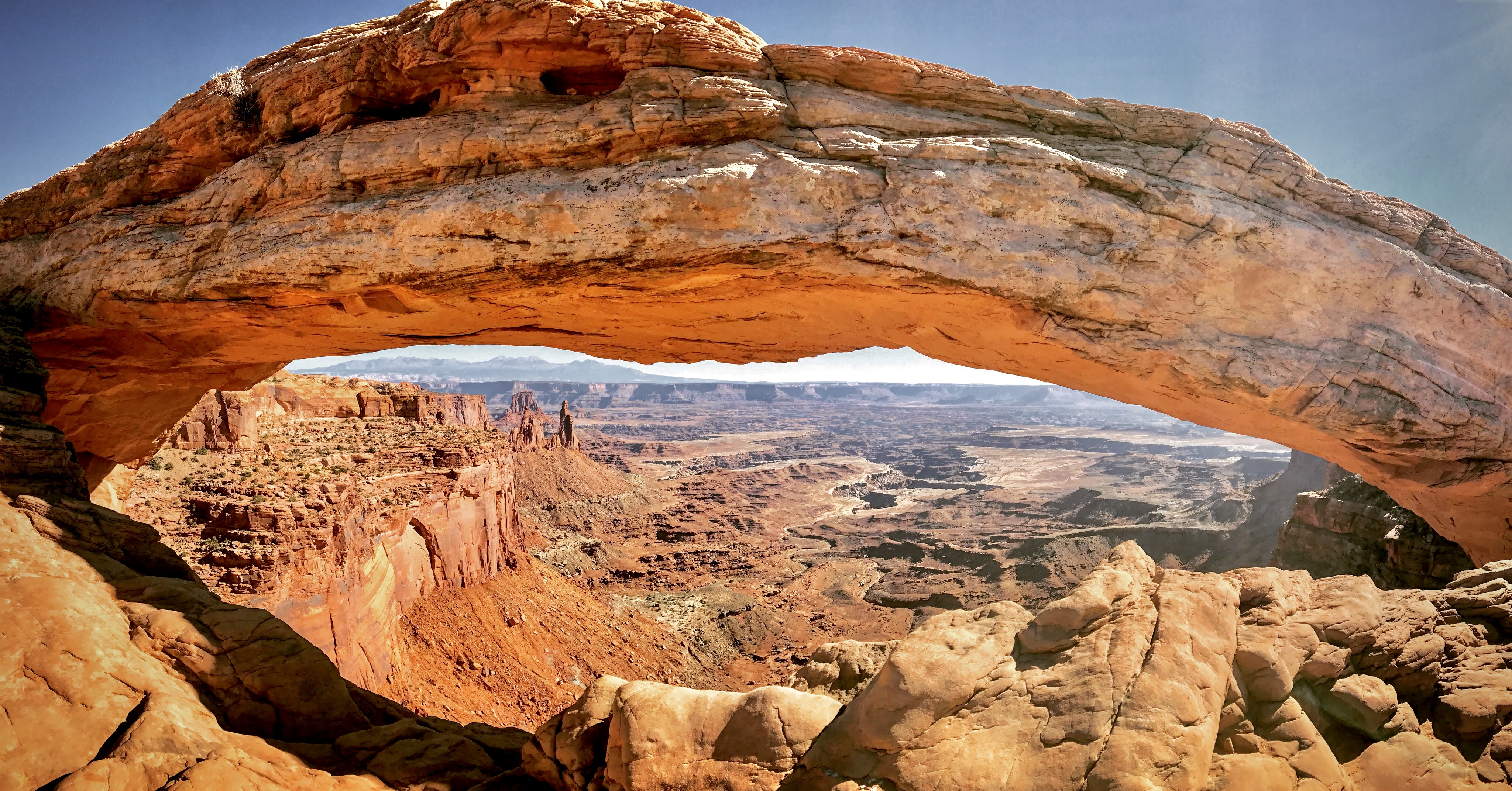 While there are plenty of advantages to traveling this region during the winter, it also comes with a few caveats and requires extra planning; the #1 challenge being snow. Though the majority of the Southwest is considered a desert, wintertime means colder weather and snow in the higher elevations. This means that not everything in the parks will be open; including campgrounds, roads, and trails- so make sure to call or check ahead. It’s important to carefully plan your route and watch the weather—staying flexible depending on the forecast. For folks living the #RVLife it’s vital to have a Plan A, B, and even C. Sometimes, you just have to goat with the flow… 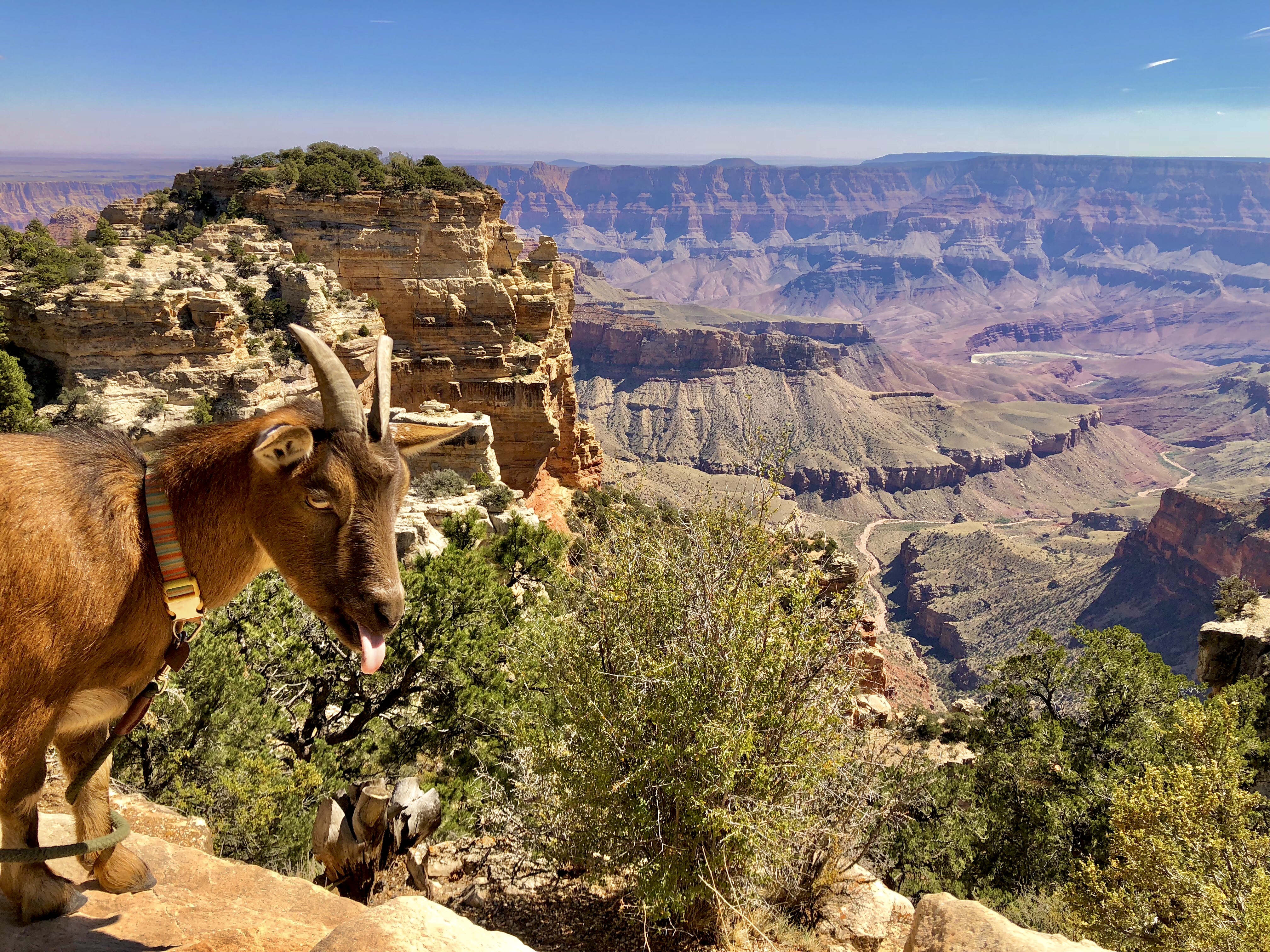 Depending on the location, temperature highs hover between the upper 40s and 60s during the daytime, while they can dip down to sub-freezing digits at night—- so packing multiple layers, from t-shirts to cold-weather gear is a must. It’s also necessary to winterize the RV by filling your propane tanks, prepping your water and sewer systems, and insulating your windows. Like any place that is prone to snow, always bring snow chains and make sure your tires are in good shape.

Though wintertime travel comes with its own limitations, there are also plenty of bonuses!!! 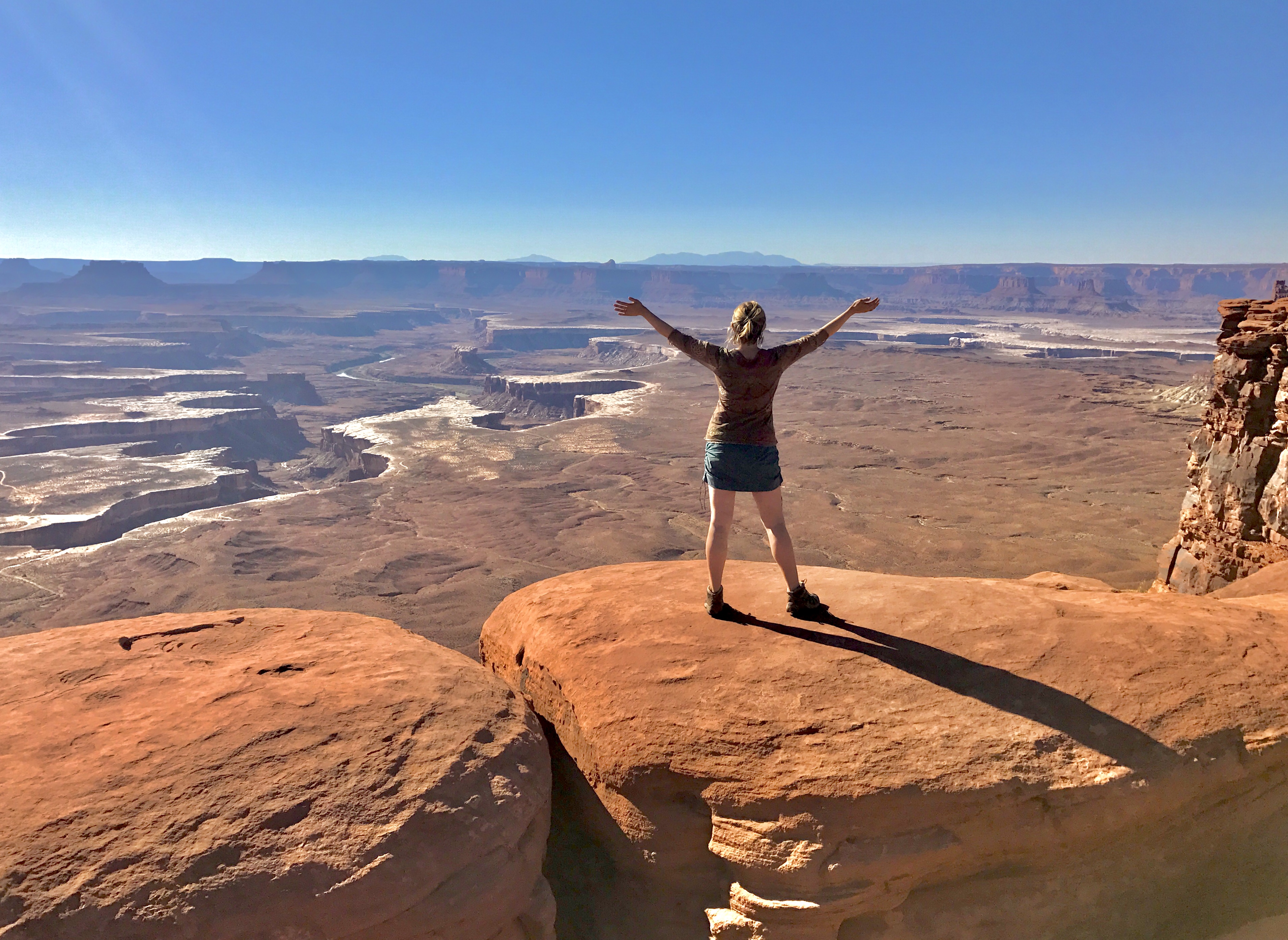 One of the best perks about wintertime travel is the lack of crowds that usually swamp the parks for the rest of the year. There is no bigger buzz-kill than arriving at a beautiful destination, only to be surrounded by thousands of tourists with their selfie-sticks blocking the views. Popular trails congested with hikers during the busy months thin out during the off-season, promising a more serene experience in nature and also affords you a better opportunity to practice social-distancing. If you want to avoid even more people, start your hike early or explore more popular places during the middle of the week and save the more obscure spots for the weekend.

Additionally, due to smaller crowds, many roads that are only open to shuttle buses during the majority of the year, open up to car traffic during the winter. While being able to explore on your own, take a trip on Hermit Road at the Grand Canyon’s West Rim or drive into Zion Canyon. 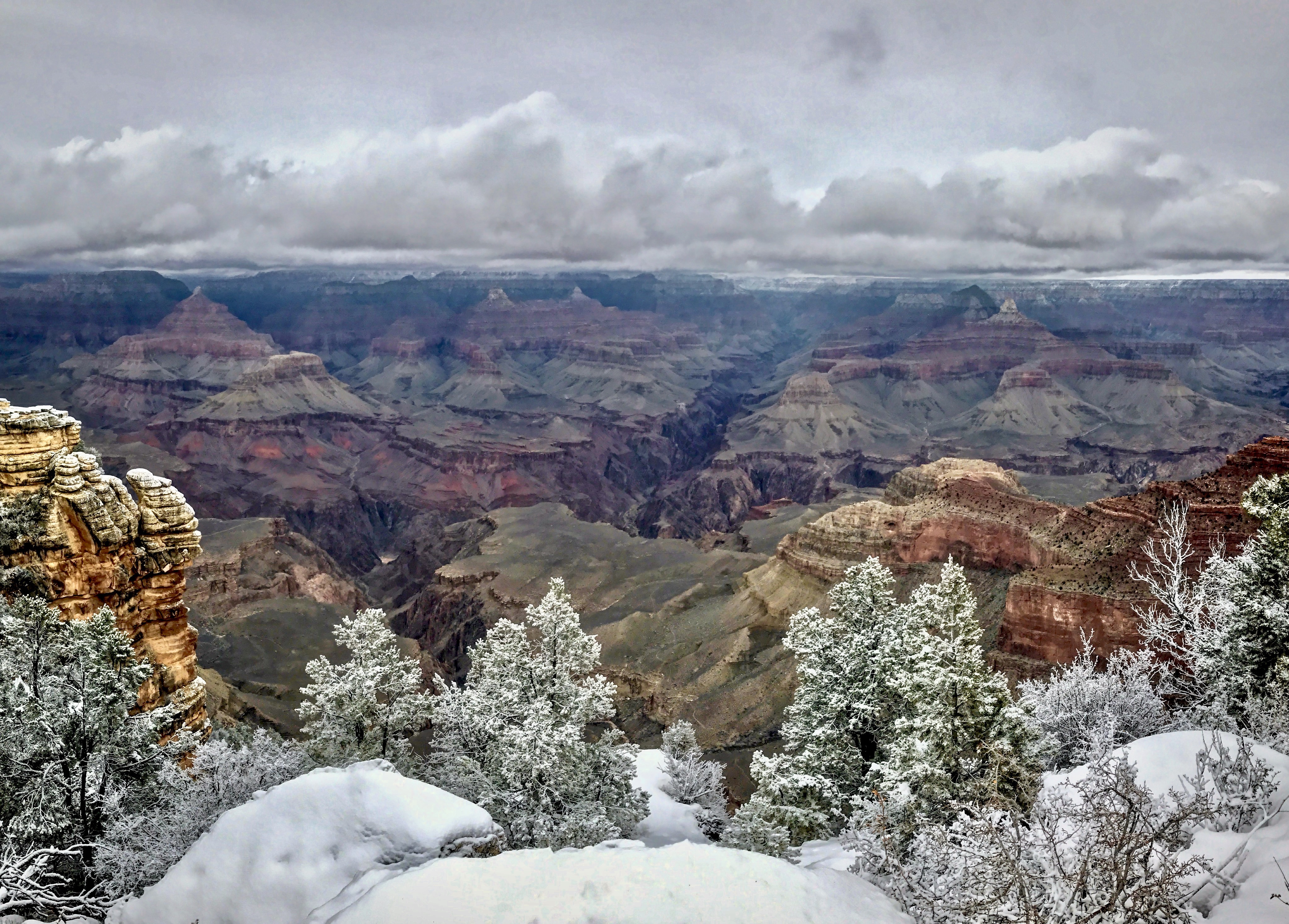 Wintertime in the Southwest is a spectacle of contrasts. Whether you’re visiting the Grand Canyon, Arches, or Bryce Canyon, the bright glistening snow juxtaposed with the warm, rich colors of the desert is a sight for sore eyes, and a view most National Park visitors never see. Often times, the valleys remain dry while the mountains and mesas are dusted with snow, providing a perfect backdrop for photographers. During dawn and sunset, these snowy peaks light up with alpenglow, turning brilliant orange and pinks. Not only that, but wintertime skies are also clearer, which means more stars at night and visibility from farther distances. The sun is also lower in the sky so expect more shadows and colors painting the canyons.

The snowy views aren’t the only thing to enjoy. For those who love winter sports, some of the country’s best ski destinations are in the Southwest, like Telluride, Taos, and Park City. Many National Parks offer free ranger-guided snowshoe excursions where you can learn interesting history about the park while taking in some spectacular views. Additionally, while the main roads in the parks are routinely plowed, several higher elevation roads will be closed until spring, leaving you an ideal route to  cross-country ski and snowshoe. 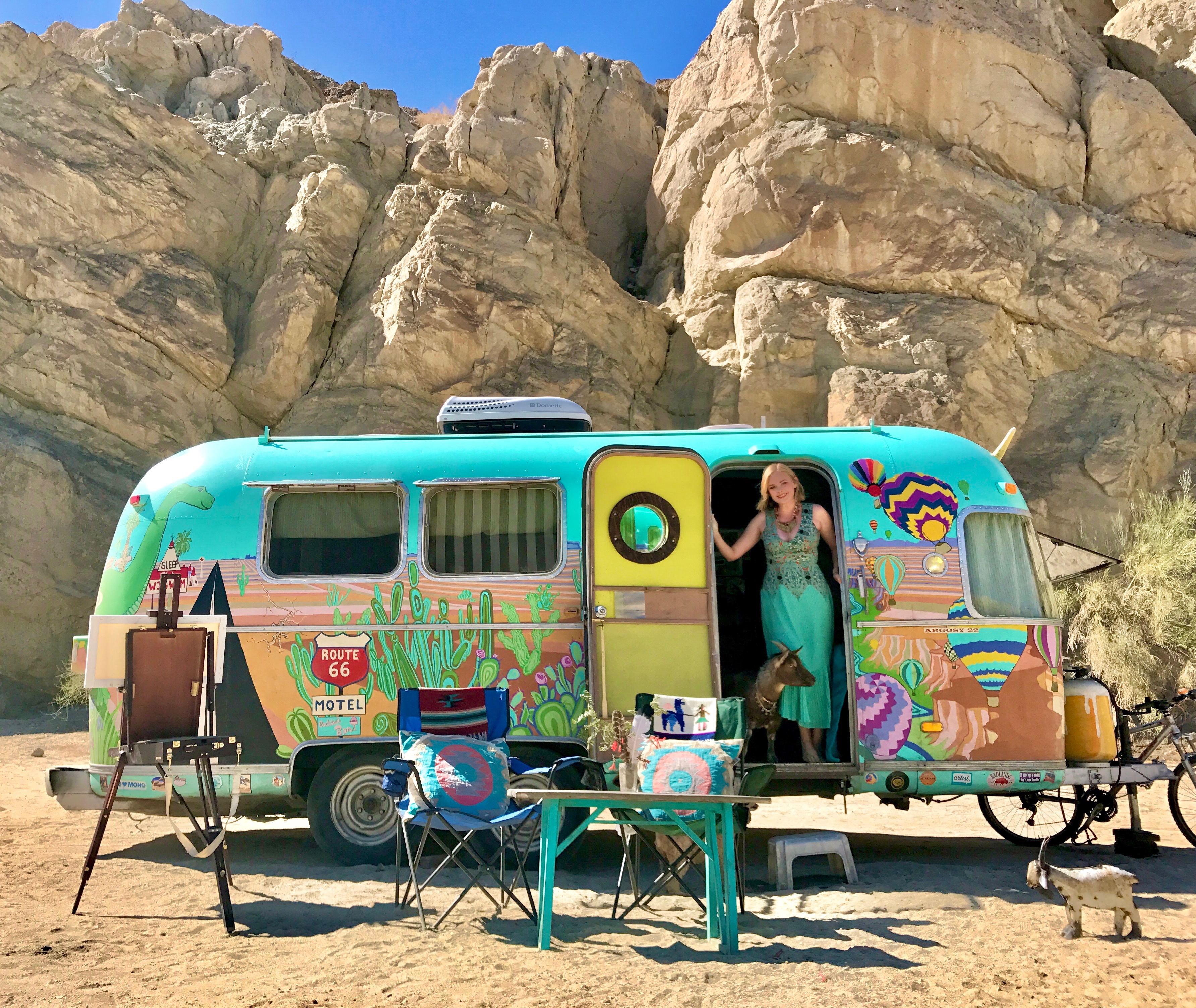 One of the best perks about traveling during the wintertime is avoiding peak-season prices. For those who prefer staying at established campgrounds, many RV parks offer deep discounts during the off-season. The other plus side is that you don’t have to worry about making reservations a year ahead — campgrounds open during the winter are less likely to be at capacity and are usually more relaxing.

While planning your route, consider making a few basecamps in central locations to allow for easier access to the parks. Here are a few favorite Good Sam campgrounds and RV resorts in the Southwest region.

4) You Can Comfortably Hike Without the Desert Heat

During the summer months, temperatures in the Southwest can be brutal. Not only is it hard to go hiking when the scorching temps range between 90 and 115F, if you’re boondocking, you’ll also need a constant source of electricity to run you’re A/C— which means lots of generator use or choosing to stay at a full-hookup campground.

Additionally, one of the biggest bummers of traveling during the warm months is the bugs—especially if you are near water. Camping trips at the most breathtaking places are easily ruined when the area is taken over by a relentless swarm of mosquitos. This is another reason why winter camping rocks! Though many places in the Southwest are warm enough to wear shorts and t-shirts during the day, the temperatures plummet to freezing temperatures at night, so most bugs go dormant. Insects aren’t the only things that lay low during these cold months—so do the snakes! By planning a trip to the desert during the wintertime, you’d be hard-pressed to run across these sun-worshipping creatures. 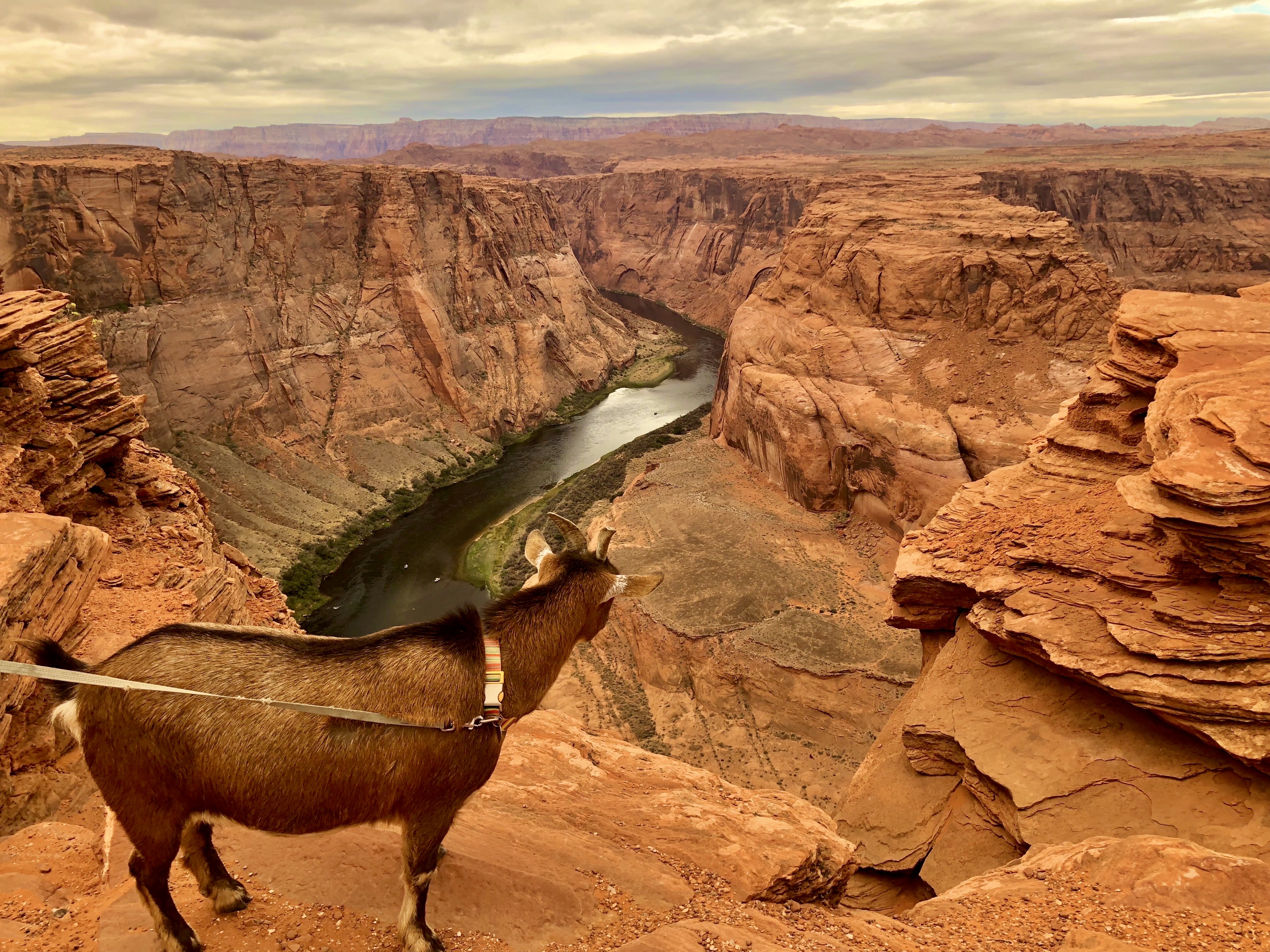 Southwest summer months are often too hot for animals to hike due to their tendency to overheat, which can be dangerous and even deadly. In general, hiking in this region involves full sun exposure, which makes the ground incredibly hot from spring to fall. This is bad news for pets, whose paws can easily become blistered. However, during the cold months, the daytime temperatures are pleasant, making it a safer and more enjoyable time for pets on the trails.

If you are traveling with Fido, many places you’ll want to visit do not allow animals, with most National Parks only permitting pets on roads, campgrounds, and overlooks. Unlike the hot months that are too dangerous to leave your pets alone in the RV, the cooler temps during the winter make it much safer to leave furbabies alone for a few hours while you explore the area.

While pets are very limited in National Parks, dogs can hike most trails on BLM and National Forest land. Additionally, much of the Southwest’s state parks are incredibly pet-friendly, allowing pets on most trails, overlooks, and campgrounds. Below are a few favorite pet-friendly state parks.

No matter where you find yourself this winter, have a safe and wonderful New Year. Happy Trails! 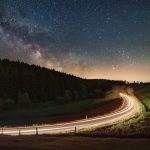 Driving in the Dark: Tips for Safe RV Nighttime Travel Previous
Discover the Unexpected in Laughlin, Nevada Next 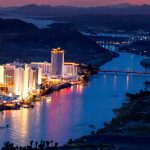