A Winter Climb to William’s Lake–Part 1

A week ago we were up at the Taos Ski Valley watching the very impressive Salomon Freeride Championships. While we were there, we had checked out the trail to Williams Lake, one of our summer favorites, and saw that it was snowshoe tracked. We came home and ordered snowshoes for our northern New Mexico home (ours were safely ensconced in our cabin in the northwoods of Wisconsin, doing us absolutely no good!) Our plan was to head up to the ski valley this Saturday (which would have been March 9th) to snowshoe that trail for the first time. However, the night of March 8th, the Taos Ski Valley was graced with an additional 17 inches of snow and it continued to snow throughout the day on Saturday.

Snow on the shelter in the parking area

There is great access to the Ski Valley for the downhill skiers who access the upper levels, where the Williams Lake Trail is located, via ski lifts. However, if you are not equipped with downhill skis and purchasing a lift ticket for $100+ the road up to the Williams Lake Trail is neither well-plowed nor passable. Also, the idea of snowshoeing in a fresh 17 to(what ultimately ended up being) 26 inches of snow, sounded simply exhausting. Thus, we decided to put off our snowshoeing venture until the following Thursday. It was a great decision!

This Thursday we ventured up to the ski valley with beautiful sunshine (for downhill skiers, bluebird conditions, meaning sunny with fresh powder) and found that our trail that had already been tracked by other hikers and snowshoers. It was an absolutely delightful day! The temperature at the start was approximately 36 degrees but was headed up from there. At the end of our journey, we looked at the thermometer on the deck of the Phoenix Grill and it read 65 at about 12:30.

Terry tested the snow depth with his pole; the one in the snow is the same length as the one that is visible

There were places we could have actually done without snowshoes, simply wearing boots, but the Ski Valley was boasting a base of 69 inches on their ski slopes that morning with the addition of that 26 inches of fresh powder. This was in evidence in a number of places, so one careless step could have meant being over our heads in snow, especially for me at only 5’4 inches tall. Terry tested the ski depth with his pole at one spot and his hand was buried, so we were happy we had brought the snowshoes.

So we started off and had to climb up part of a green (easy) downhill run to access the trail. At one point, the trail splits so the  hikers and snowshoers head to the left, while the skiers come down the right leg of the trail. We headed left, happy to be out of skiing traffic. Shortly thereafter, we encountered the sign telling us the trail to Williams Lake was open. It would not have mattered, as once we saw it had been tracked by other hikers and snowshoers, there was no way we were leaving without spending some time on what had become our favorite trail.

Coming next: A Winter Climb to William’s Lake–Part 2 and issues with snowshoes.

Read more about New Mexico campgrounds and things to do in New Mexico. 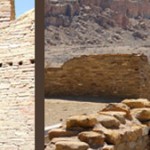 VISITING CHACO CANYON - WORTH THE INCONVENIENCE Previous
How important are size restrictions when searching for... Next 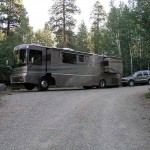