VISITING CHACO CANYON – WORTH THE INCONVENIENCE

We traveled desert roads listening to Ferde Grofe’s “On the Trail” on satellite radio; then switched to R. Carlos Nakai’s ethereal Indian flute music on compact disc as we rode the trail through Chaco Canyon, soaking up the spirit of a civilization long past. 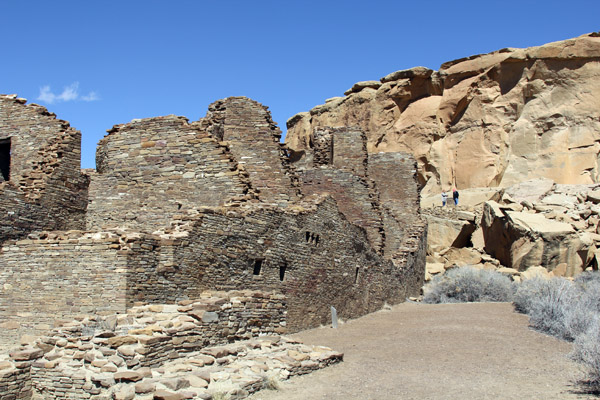 Our six-month journey has begun, already highlighted by a deviation from the planned route.  Chaco Canyon in New Mexico is “the cradle of our people,” according to Southwestern Indian historians.  Visiting the remnants of this lost culture from a thousand years ago is not an easy trip for RVers; yet, we found it to be worth the effort, but only after shedding our travel trailer and driving into the canyon in our truck.

There are three roads that access this hallowed site. The one, from the north is 11 miles of bad road, while the one that we 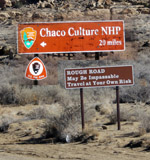 As stated, it was a deviation.   Our destination was Santa Fe, New Mexico, but as we drove the endless, curveless desert I-40, I mentioned to Monique that I thought Chaco Canyon was along the way.  “Yes,” she said, “it is,” and thus began some quick research as to the best way to make it happen.

This became our first cultural destination on the way to the East Coast and then up into the Canadian Maritime Provinces.  Chaco, a National Historical Park, has been high on our bucket list for many years, and this looked like the best chance to learn why it’s so special. 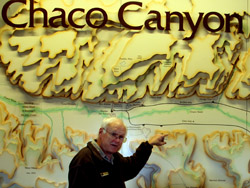 Before getting into the rigors of reaching the canyon, it’s probably a good idea to mention why we were so impressed with the experience.  First, we watched the excellent video in the cultural center – this is something we do at every park we visit to understand its significance … and this one was one of the best.

The Pueblo clans (the ancients, the Anasazis) employed incredibly sophisticated, distinctive architectural skills to turn massive boulders into flat rocks, and bind them to build structures as tall as five stories, much of which has been unearthed and restored by archeologists.

Chaco, between 850 and 1150 a.d. was the ceremonial center for tribes from throughout the Southwest.  But more than that, it was a trading center, a place where various cultures learned from each other, and it is revered today as a spiritual vortex.

“It is still a give-and-take place,” as explained in the video.  It’s not a ruin (to paraphrase because I was listening and writing 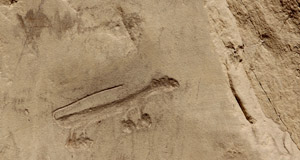 "Tutuveni:" a petroglyph by "those who have gone before"

notes at the same time).  It is very much alive in dances and ceremonies of the clan traditions.  It is still a place for the physical, ceremonial and spiritual.

One of the most beautiful concepts brought out in the video is that when it was time for the Puebloans to leave, they emulated the clouds they studied by moving on, leaving their six-centuries-old home.  From there they dispersed into other areas, other tribes.

Walking through the vast settlement gives visitors a glimpse at the grandeur, the stability of their structures.  Not only have the walls, kivas and other structures survived, but remains of logs used to separate levels are still in place.

We have walked the ruins of many Native America villages throughout the Southwest and appreciate most of them, but there is something special about this place.  For one thing, it was the first settlement, before Mesa Verde and all the rest.  The size, the ingenuity, the evidence of it being a thriving civic center, “the cradle of this civilization” are overwhelming.

Obviously it’s appreciated by others, for Chaco Canyon is a National Historical Park and a World Heritage Site.  Rangers and volunteers from the National Park Service (NPS) staff the park.

Travelers can take the 9-mile paved loop road inside the park to access the historical sites (inside the park itself), and many trails beckon hikers. 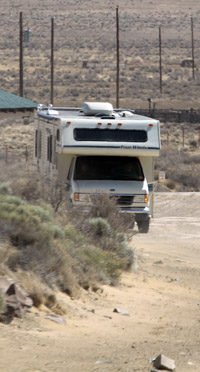 And now the bad news: On our way out we stopped along side a 25-foot C-class and explained what he was about to put his rig through.  He turned back.  RVs do make it to the campground there, but only after a grueling drive.  We haven’t experienced the northern route, but we’ve heard it’s not any better than the one we took.

With great trepidation, we unhitched in Crownpoint, New Mexico, leaving our travel trailer in the Bashers’ grocery parking lot (with permission from the manager).  That was 16 miles from the onset of the 20-mile-long dirt road.  I can’t give advice on any better ways of reaching the park with an RV.  There doesn’t seem to be a good alternative.

So, at this point you’re asking yourself, “Why should I go?” I can only say that we felt an excitement by being there.  We began to understand why the Navajos Nation welcomes visitors to experience the place of “those who have gone before us.”

Because of the numerous Spam comments on this site, the comments section has been deactivated.  Please email us at [email protected] and I will pass along your comments.