Up, Up and Away: Albuquerque International Balloon Fiesta

Each October, New Mexico skies are full of bold blues, imperial reds, and vibrant yellows. The event is the world-famous Albuquerque International Balloon Fiesta, the largest hot-air balloon event in the world. This extravaganza takes place from the first weekend through the second weekend in October—this year’s festival is from October 1-9—and attracts hundreds of hot-air balloonists from around the world. The balloons come in many colors and shapes with the special shapes category getting larger every year. There are balloons that look like cows, cartoon characters, automobiles, stagecoaches—and just about everything else.

A century after the release of Jules Verne’s balloon adventure novel with Captain Phileas Fogg, Around the World in 80 Days, internationally-acclaimed balloon festival was born in Albuquerque. It was 40 years ago! In 1972, and 20,000 sleepy spectators gathered at sunrise in a local parking lot to witness 13 balloons ascend. At the time, 13 balloons seemed really impressive. But in 2004, more than 800,000 spectators watched as more than 750 balloons floated into the beautiful blue New Mexico skies. The fiesta has amassed an international following, attracting pilots, spectators, and media from nearly 30 countries.

So, What’s the Big Deal About Balloons?

Hot air ballooning is a spectacular and exciting event to experience. Before dawn, people start to gather. By 6 a.m. long lines of automobiles are jockeying for position in a stop-and-go traffic scene. Excitement fills the air. Weather permitting—and if the wind is not too strong—a rainbow of hot air balloons simultaneously lifts into the early morning air. The crowd is awed and “oohs” and “aahs” over every balloon! Each is a work of art. The number of giant painted bubbles gliding through the sky multiplies the viewers’ pleasure.

The launch field is divided into three sections of 11 rows of 12 balloons each. Think of a checkerboard. The launch begins with the outside rows on the north and south ends of the field—these two rows lift off at the same time. Usually, the wind is from the north, so that works out well. Then they work in towards the middle of the checkerboard.

The excitement begins as the crews take the collapsed giant balloons from their storage baskets. Twenty to forty feet of fabric is stretched flat on the ground in exactly the right way. The blue-flamed burners that heat the air to lift each balloon are started. The heat of the flame from the propane tank is surprisingly intense and the noise made by the burner is expectedly loud. When finally, the signal is given for the balloons to ascend and they take off in waves of color, it is a magnificent sight!

Ballooning is Popular in Albuquerque…Why?

Albuquerque is popular with hot air balloonists because of the “Albuquerque Box.” In balloon language, a “box” refers to flight back and forth over the same area by using winds of opposite directions at different altitudes. It is a common phenomenon in valleys because of the flow of air down the mountains. With a box, balloonists have more flexibility in how they can control and navigate their balloons.

What is a Balloon Crew?

Balloons are big—and it takes a group of four or more people to help the pilot. Before the flight, the ground crew helps with preparing the balloon. First, they walk out the envelope for inflation, and then they help attach all the equipment to the basket. Once off the ground, the chase crew follows the balloon in a car or truck (the chase vehicle) so they can help retrieve the balloon and pack it up wherever the pilot lands. It can be a lot of work, but chasing can be fun! Balloonists often need helpers—so ask around; you might just get a ride!

Add Some Personality to Your RV Without Painting Previous
Southwestern Deserts: How to pick a boondocking campsite Next 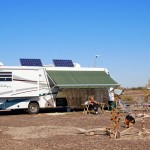