Gazing at a starry sky. Pixaby 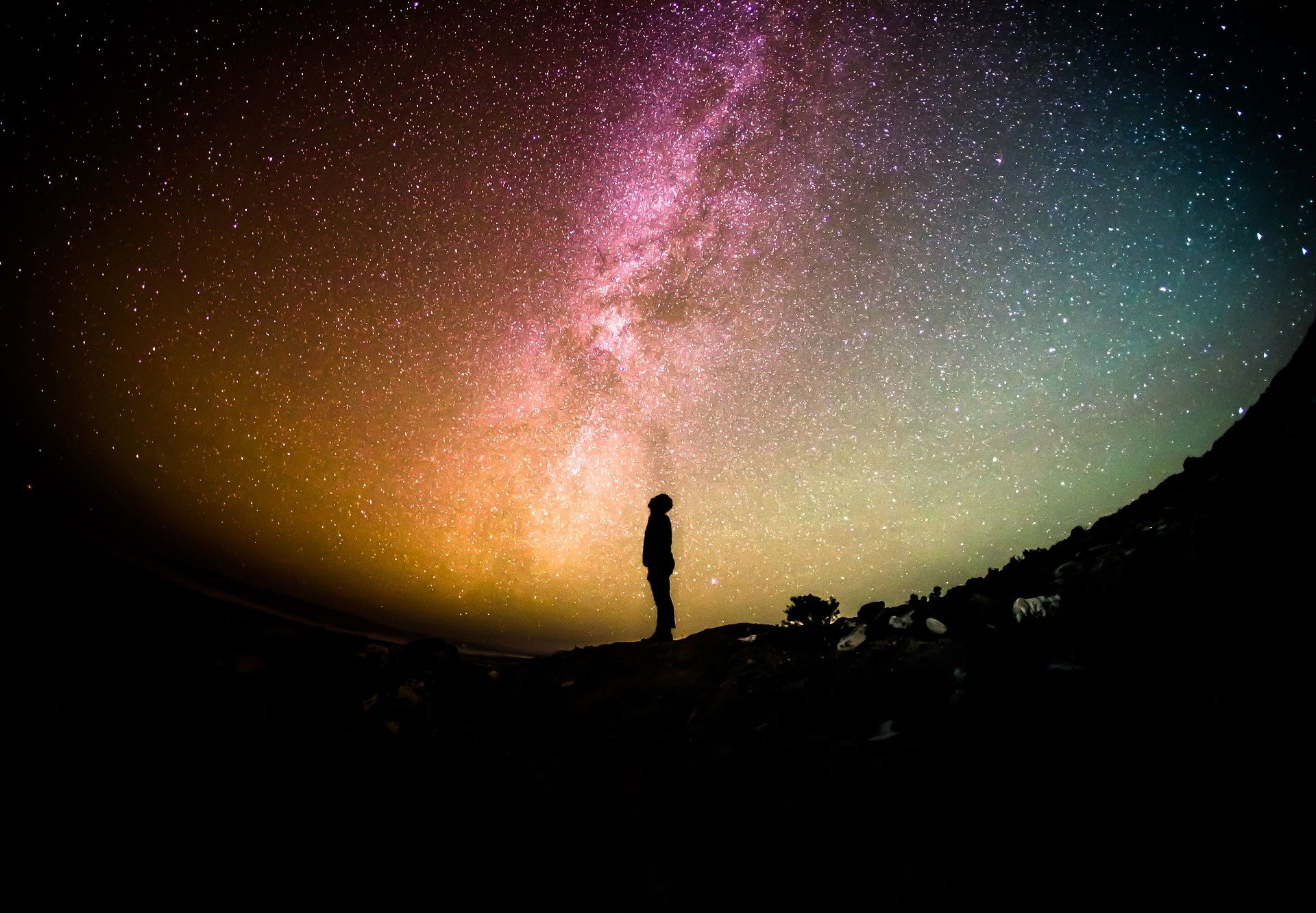 Put a stop to video streaming and turn to a different show: the night sky. From the right vantage point, campers can see endless spectacles of constellations, clusters and planets. Take in views of the Big Dipper from the Texas prairie or marvel at the Milky Way Galaxy from eastern Nevada. Embark on a stargazing camping trip to see the galaxy (and beyond) without leaving the ground at the following places: 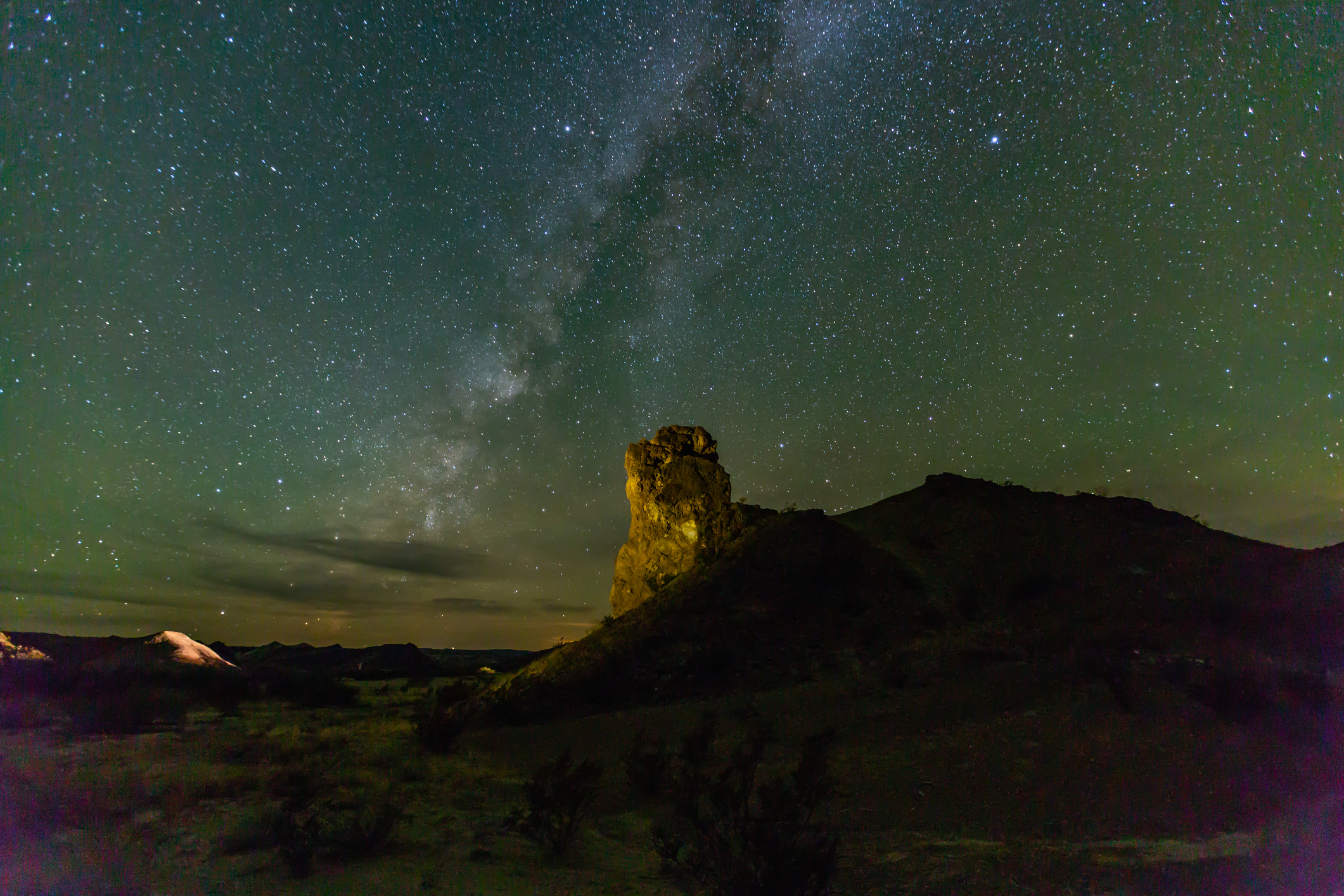 Get star-struck at Big Bend National Park, an 800,000-acre expanse of rugged Chihuahua desert on the northern bank of the Rio Grande. According to the National Park Service, Big Bend has the least light pollution of any other national park in the Lower 48 states. Sign up for a dark night sky program with park staff.

Stay: La Vista RV Park in nearby Alpine occupies a beautiful stretch of terrain with mountain views and a mile-high altitude. RVs can hike on trails, watch wildlife and go hunting. When the day is done, relax in your RV’s spacious site and take in views of the sky. 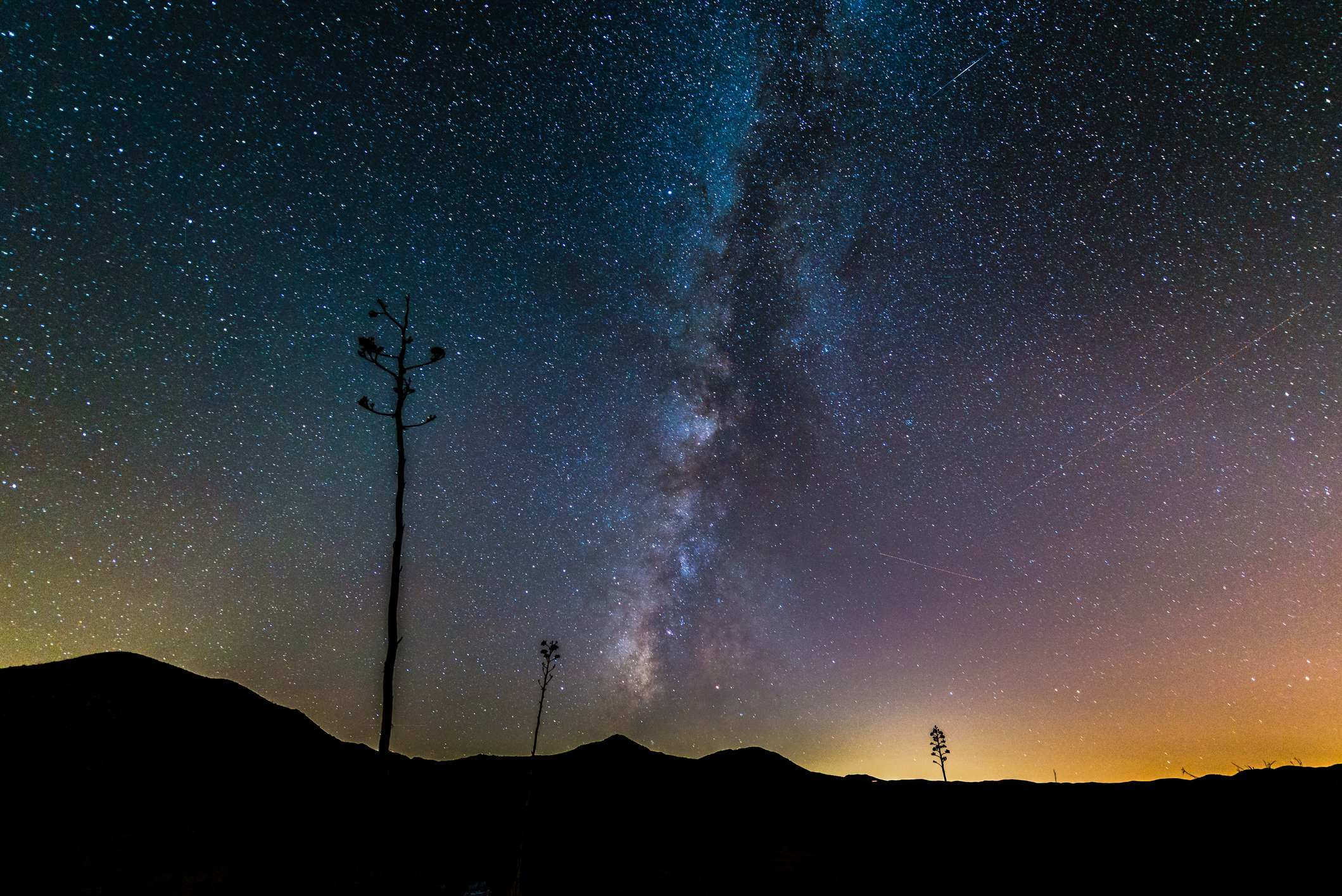 Galactic core visible in the skies over Borrego. Getty Images

With over 600,000 acres and 500 miles of dirt roads, Anza Borrego, two hours east of San Diego, has long been a favorite of amateur astronomers and astrophotographers. Dark skies and low humidity combine to make this a stargazer’s paradise. In mid-April, you can see the Lyrid Meteor Shower. 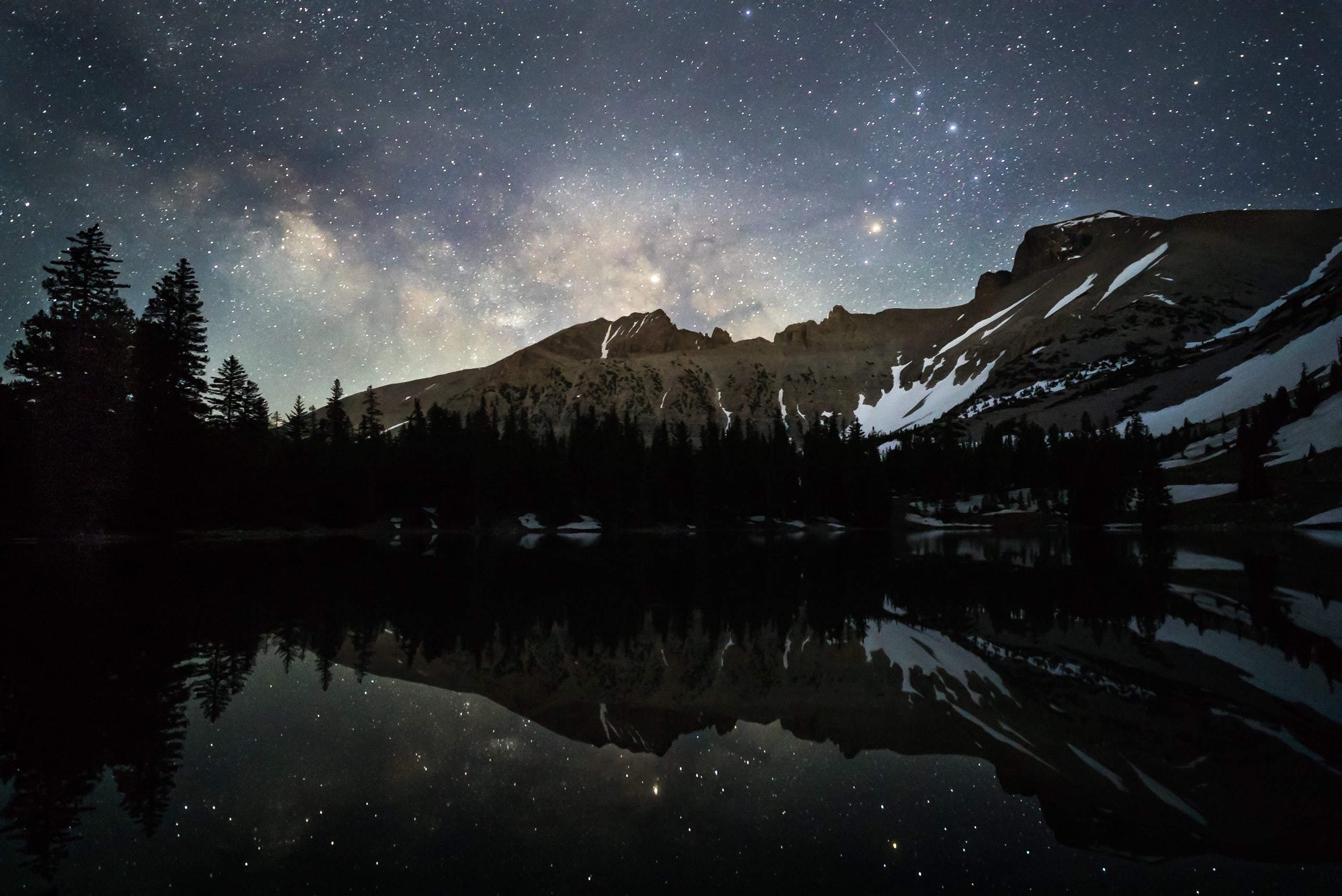 Eat your hearts out, Vegas and Reno: here’s a Silver State light display that outshines the brightest neon. Located in eastern Nevada near the Utah border, Great Basin National Park has earned a Dark-Sky Park designation from the International Dark-Sky Association. Educational programs enlighten visitors on the amazing constellations.

Stay: Valley View RV Park, Ely. This Good Sam Park is located in the largest town in the region, with a population of 4,000. The RV park’s ample amenities, friendly atmosphere and abundant shade trees constitute a welcoming oasis after a long trek on the highway. 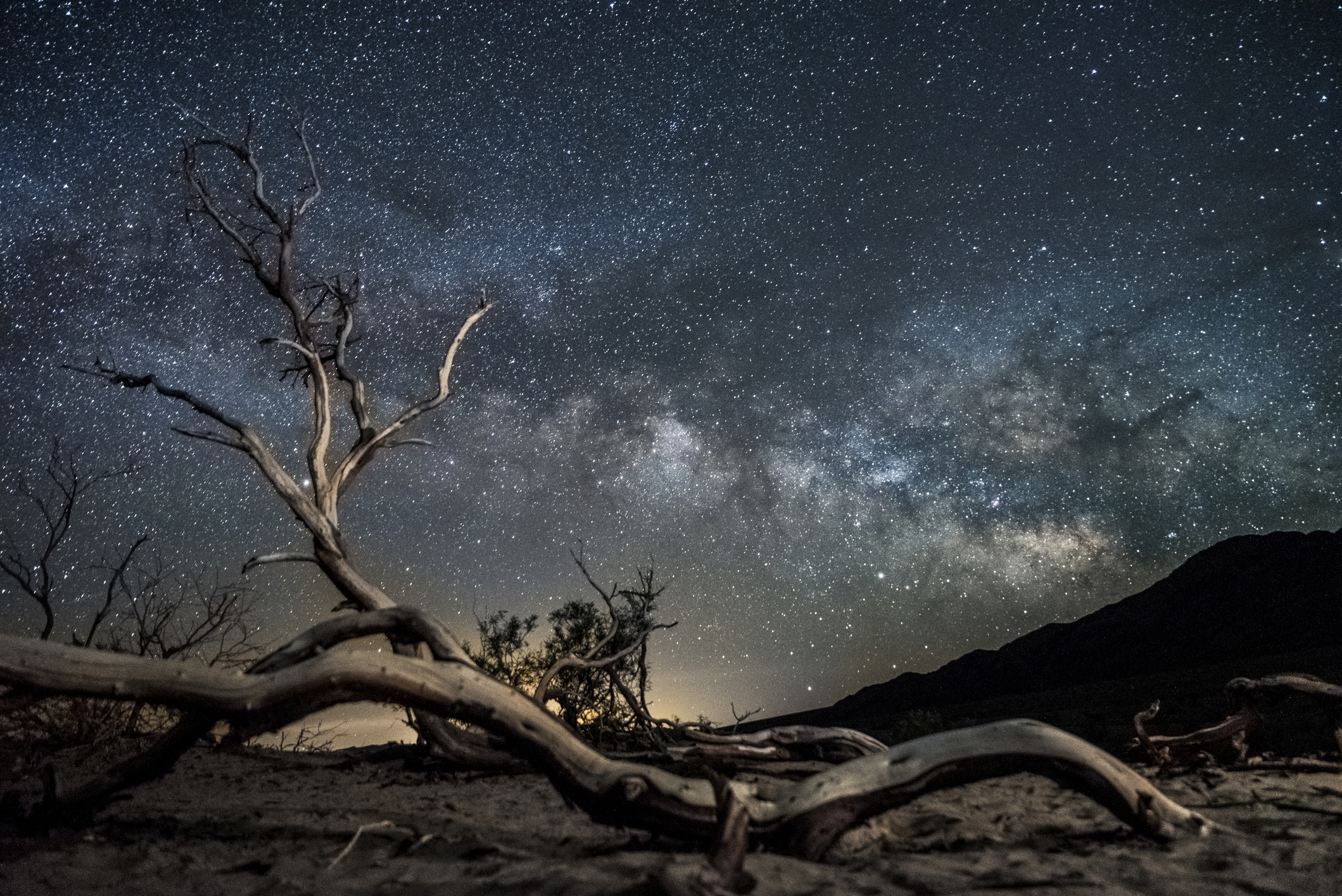 Don’t get spooked by Death Valley’s ominous name. Stretching across the desert on the Nevada border, Death Valley National Park encompasses 3.4 million acres, most of which is designated as development-free. The dry, light-free air pays off with stellar views of meteor showers and “so-close-you-can-touch-it” views of the moon. Plan your visit from November to April when temperatures are in the 70s and park rangers lead night sky programs.

Stay: Longstreet RV Resort & Casino. Located just across the Nevada border, the 24-hours casino features slots with payables up to $9,000. Take a dip in the hot tub and enjoy the night sky. 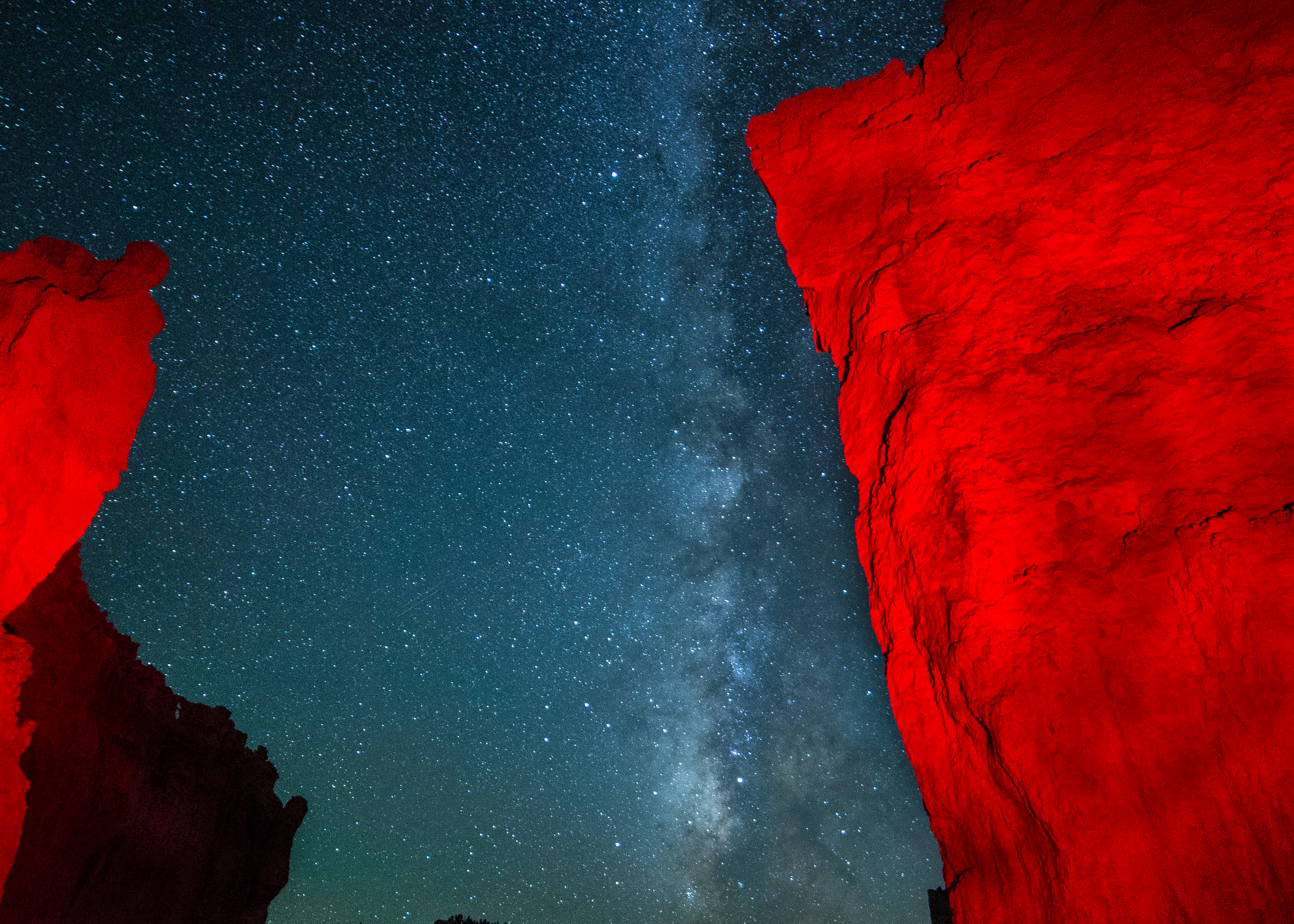 The orange sandstone hoodoos that populate this park have made it catnip for photographers. But after sundown, camera buffs turn their lenses upward toward the brilliant firmament, made possible by the clean, dry air, high elevation and freedom from light pollution. Check it out during the week of the new moon or the week proper to the new moon, when the Milky Way dominates the horizon like a majestic silvery arch. More than 7,500 stars are visible to the naked eye in optimal conditions. Astronomy Festival scheduled for June provides a rich program of presentations, science workshops, and sky tours. Nearby Cedar Breaks National Monument (at over 10,000 feet) has equal – if not better – viewing conditions. 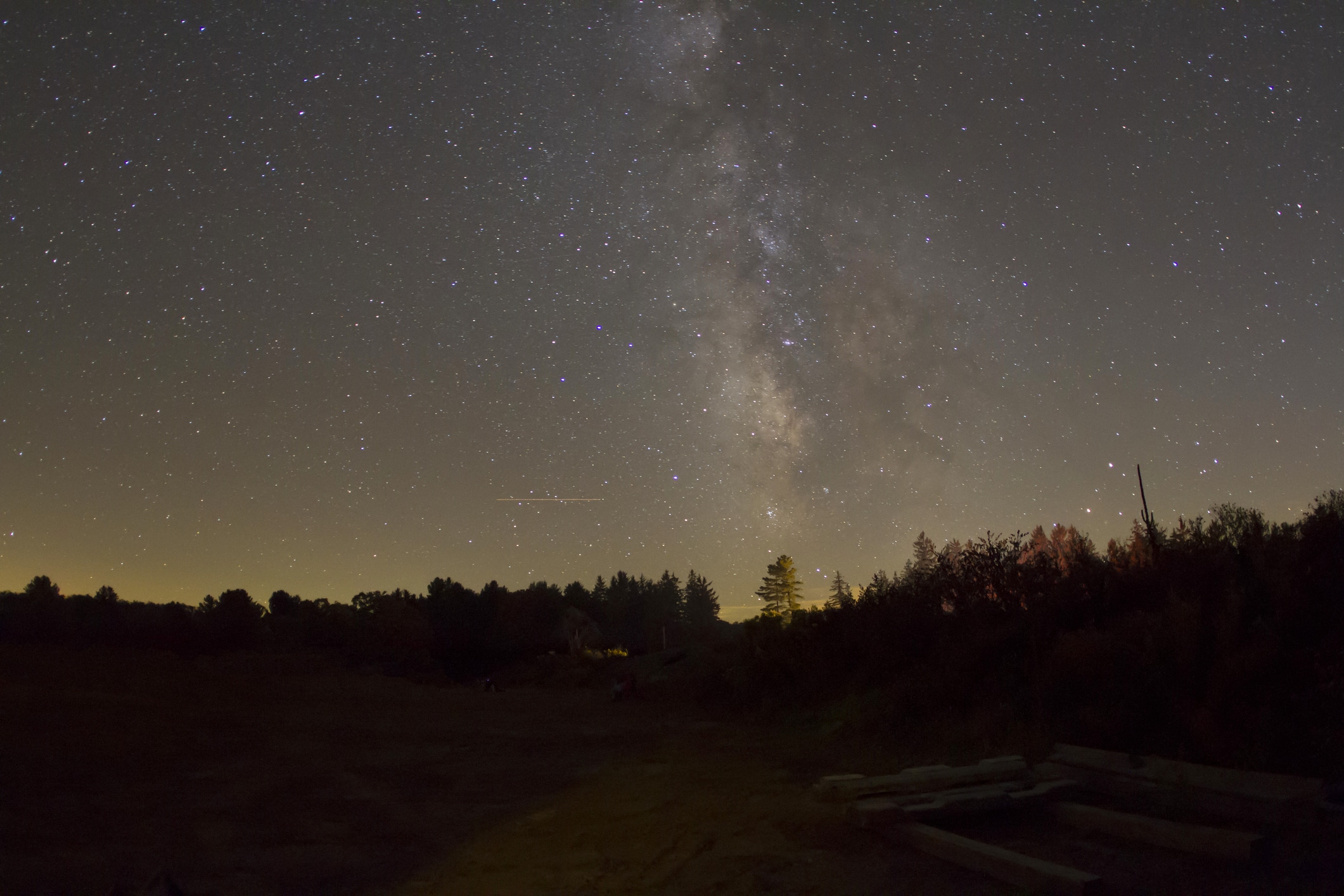 Nestled in the north-central region of the Keystone State, Cherry Springs State Park has some of the darkest skies east of the Mississippi. In 2008, it earned Gold-Certified IDS (International Dark Sky) Park status, one of only a handful of U.S. parks with that honor. The park sits atop a 2,300-foot-high mountain in the 262,000-acre Susquehannock State Forest, giving visitors 360-degree views of night skies that twinkle with stars. Get a clear view of the Milky Way Galaxy’s dense nucleus. I wonder what the starscapes look like from that neighborhood. 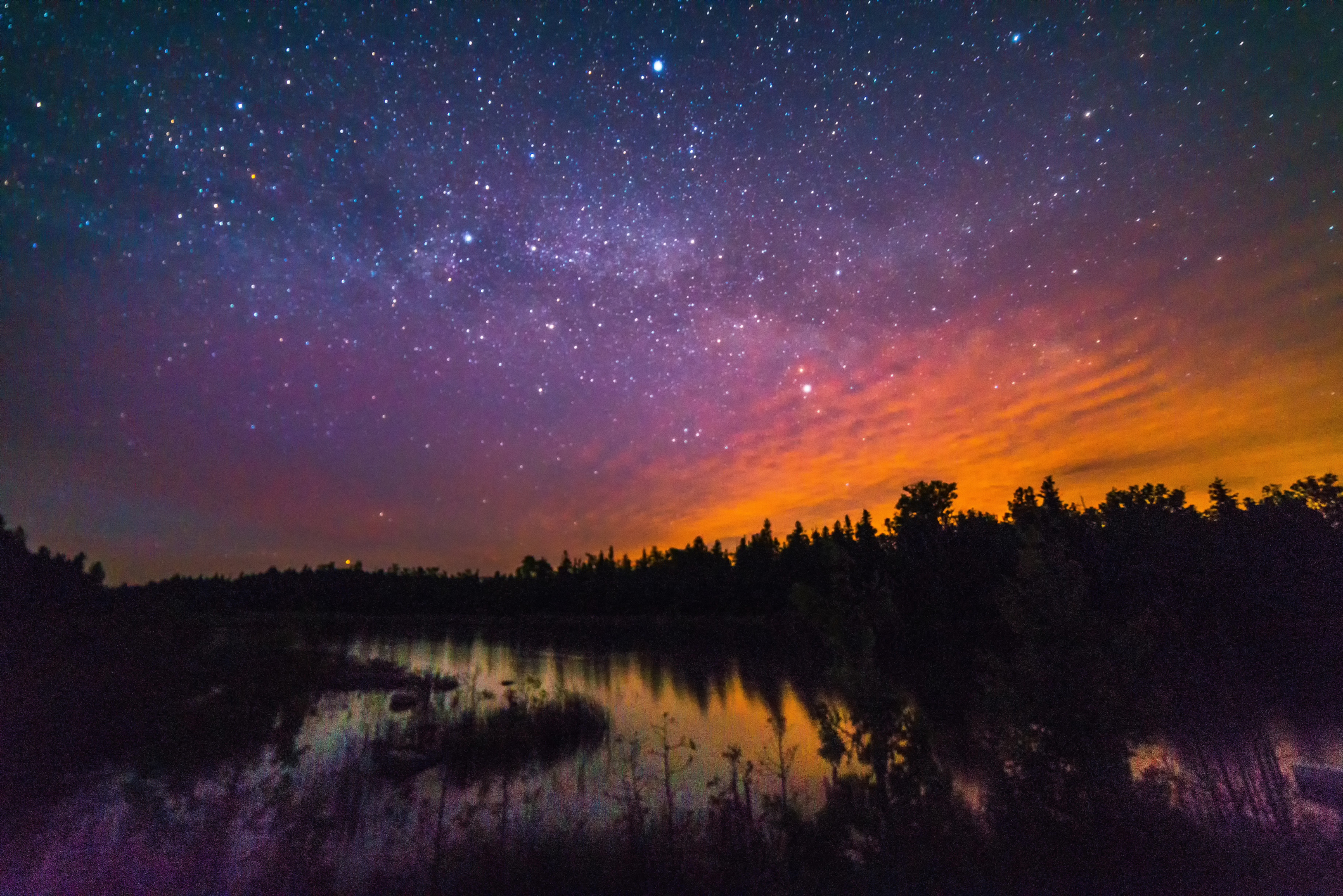 The Straits of Mackinac is the meeting place for two Great Lakes — Michigan and Huron. It’s also where stars congregate after dark. See amazing lights overhead from the Headlands International Dark Sky (IDS) Park, located on the straits at the very tip of the Michigan mitt. Take the Dark Sky Discovery trail to see comets, asteroids and constellations from the park, which received Silver-Certified IDS Park designation in 2011. 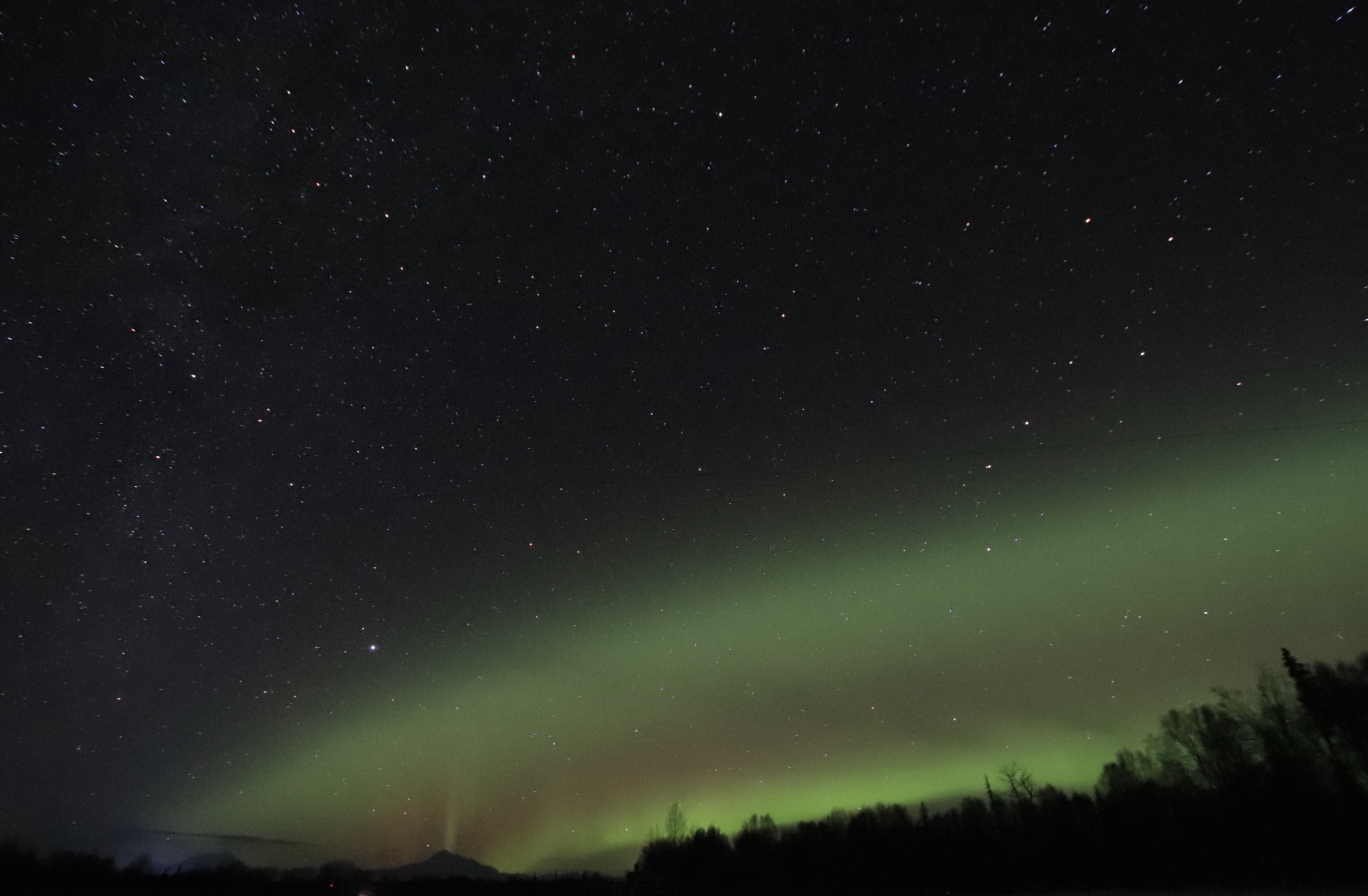 The northern lights shimmer under the Big Dipper in the skies above Denali National Park. Getty Images

The Last Frontier State offers some great vantage points to see the final frontier: space. In the heart of Alaska, Denali National Park and Preserve plays host to the surreal Northern Lights, a phenomenon caused by the collision of solar winds against the earth’s atmosphere.  The luminous and greens, reds, blues and purples dancing across the night sky must be experienced in person to be believed. Plan your trip for the fall, winter, or early spring, when long hours of darkness make for perfect night sky viewing.

Stay: Located a half-hour from Denali’s south entrance, Cantwell RV Park puts guests in proximity to berry picking, hiking and wildlife viewing. Don’t feel like leaving the park? Participate in crafts for kids and adults or line up for the tasty barbecues. 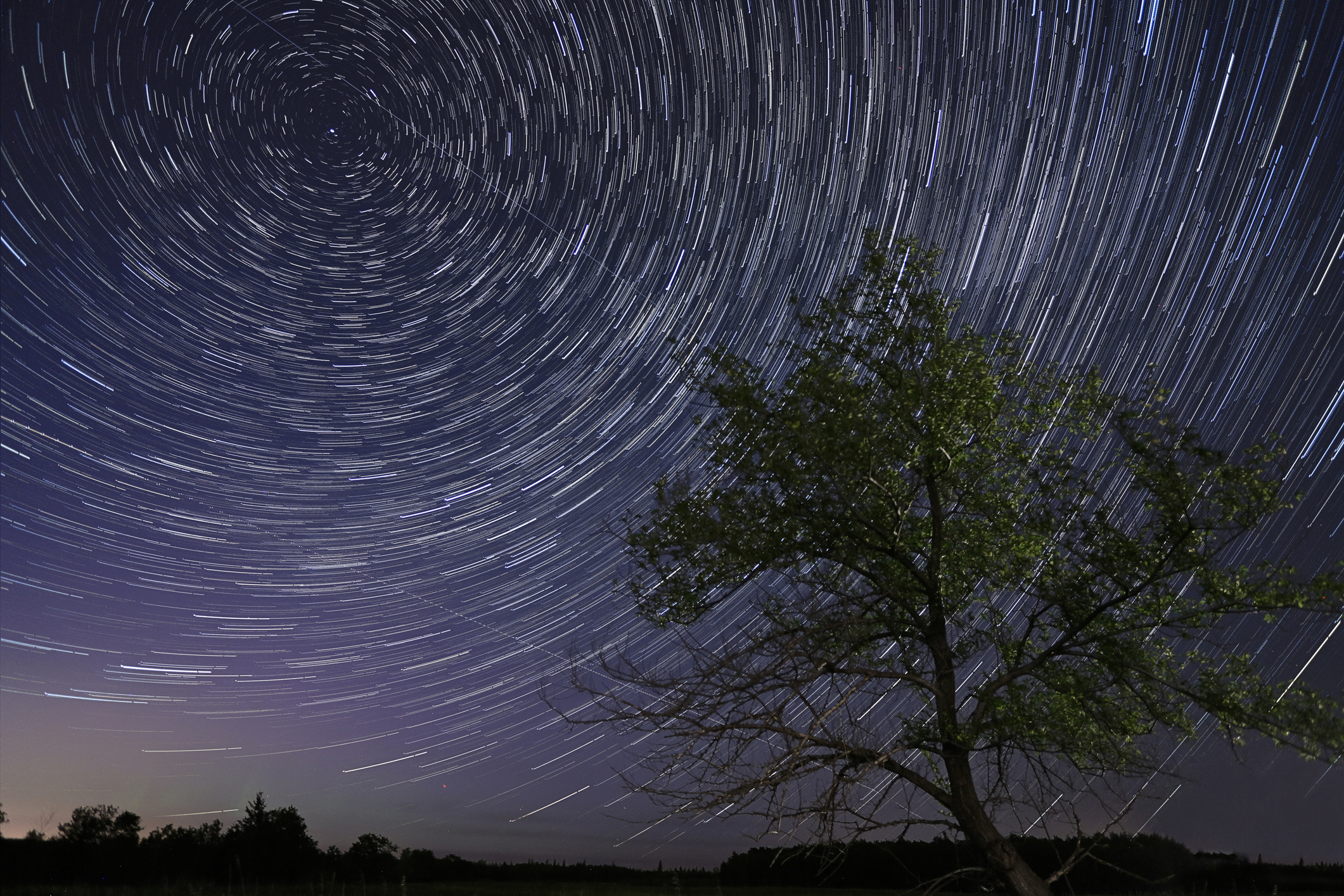 A 30-minute-long star trail taken from the area around Whiteshell Provincial Park in Manitoba. Getty Images

Eighty miles east of Winnipeg, Whiteshell Provincial Park is home to West Hawk Lake, formed out of a million-year-old meteor crater. Skywatchers visiting the forested park can set their sites clear vistas of the Milky Way, planets, and constellations. It’s unlikely that you’ll find yourself in the path of an earth-shattering meteor, but you might just catch a few meteor showers streaking across the sky. 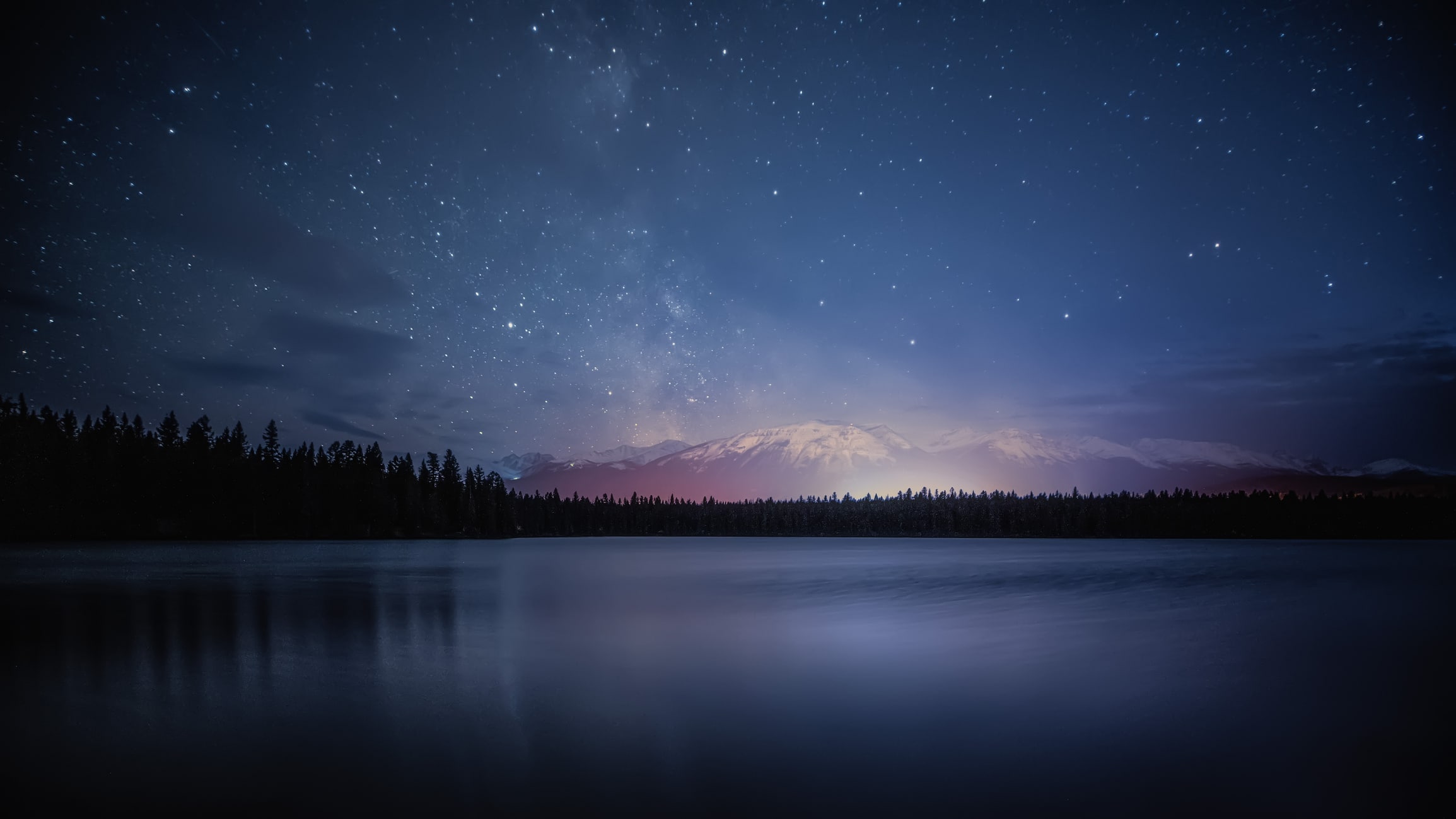 In 2011, Jasper National Park earned a Dark Sky Preserve designation from the Royal Astronomical Society of Canada, and it’s no wonder why. The 4,247-square-mile park in the Canadian Rockies is dotted with prime spots to see the shining lights above. At the top of the list is Medicine Lake, whose dark expanse stretches under dramatic constellations. On some nights, the aurora borealis makes an appearance; although it’s most common in winter, the colorful phenomenon slimmers year-round. 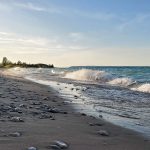 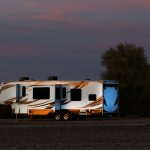