San Antonio is best known for being the Home of the Alamo and the San Antonio River, the center points of numerous activities in the downtown area. The river actually has its headwaters in northern San Antonio and travels southward through the city.

The Alamo is part of a chain of five Spanish missions that still stand along the river and served as religious institutions and economic centers 200 years ago. The five missions are somewhat connected by their proximity to the river and signage linking them along a route called the Mission Trail.

San Antonio’s Paseo del Río, or River Walk, ranks No. 1 or No. 2 each year as the most popular tourist attraction in Texas, with up to 3 million people visiting from throughout the world. The other No. 1 or No. 2 is The Alamo. It’s a moot issue really. If you travel here to take in the River Walk, you’ll almost certainly visit The Alamo, and vice versa. They’re just a couple blocks apart, connected by an “alley” with waterfalls, snazzy shops, and lush gardens.

Native Americans who once gathered in the grassy plains and rolling hills of what is now Central Texas had a special name for the clear waters burbling forth from limestone outcrops. They called the main life-giving stream Yanaguana, which means refreshing waters. You will know what they meant as soon as you step down from street level, slip into the shade of towering cypress trees, and feel the cooling river breezes.

Renamed the San Antonio River in 1691 by Spanish explorers, the river has since brought settlers, ranchers, farmers, craftsmen, artists, and many others from around the world to its meandering banks. A tapestry of modern buildings, colonial missions, museums, historic neighborhoods, and diverse international culture has sprung up around the famed river.

What started as the vision of a young architect, in 1929, has grown, over the decades, into one of the world’s most distinctive meeting places.

The River Walk extends from a wiggle of the San Antonio River, shaped much like a bent horseshoe, in the heart of downtown.

America’s favorite river walk, the San Antonio River Walk or Paseo del Rio, was built by the WPA (Works Progress Administration) as a flood-control project from 1939 to 1941 and now makes a splash controlling the flood of more than five million visitors annually to its cypress-lined cobble- and-flagstone paths along both sides of the narrow San Antonio River.

After the city created a River Walk District and a commission to oversee it in 1962, business leaders formed the Paseo del Rio Association to promote it. The 1968 HemisFair revitalized the downtown with the construction of the Convention Center, Tower of the Americas, and other distinctive structures.

The San Antonio River Walk is a public park, open 365 days a year. It is a network of walkways along the banks of the San Antonio River, one story beneath downtown San Antonio. An important part of the city’s urban fabric, the River Walk winds and loops under bridges as two parallel sidewalks, lined with restaurants, bars, shops, and hotels. It connects the major tourist draws from the Alamo to Rivercenter Mall, Arneson River Theatre, La Villita, San Antonio Museum of Art, and Pearl Brewery.

The River Walk has grown to a stunning eight miles and will stretch to 15 miles by 2013. Each part offers a unique look and feel.

In May 2009, the new Museum Reach portion of the River Walk opened. It features over one mile of new River Walk footage, beautiful landscaping, and lighting at night. It begins at the Holiday Inn El Tropicano Riverwalk Hotel and ends at the Pearl Brewery Complex. The Museum Reach section stretches 1.7 miles north, passing the beautiful San Antonio Museum of Art, a lock system for the river boats, and the oldest VFW Post in the State of Texas. Landscaped with native plants and small water cascades, the route features art installations under every bridge.

Entertaining 35 to 40 minute-long narratives of the rich history of the river and attractions seen along the route including historical details that cover two and a half miles of the beautiful San Antonio River Walk.

With 39 stops along the beautiful River Walk, the Rio Taxi service provides the opportunity to relax on your way to your favorite restaurant or River Walk hotspot. Tickets are available on the Rio Taxi boat.

Earn Money From Your RV--the Kindle Effect! Previous
10 DAYS BEFORE MARDI GRAS Next 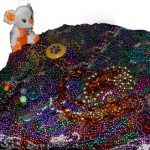 Your Island Pool Awaits at The Woodlands’ Rayford Crossing in Texas