In the opinion of Lug_Nut. Trailers, 5th wheels and motorized RV’s offer basically four styles in dinette designs.  The type you get is largely dependent on the unit price point, make, model and floor plan.  The four designs generally conform to the following offerings.

Booth Dinette:  This is a fixed table, usually fastened to the wall, with bench seats facing each other forming what is termed a “Booth”.  These can be a total of two seats, three or four.  They can be basic or they can be extremely plush, it all depends on the manufacturer and the price point.

Free Standing Dinette: This can be a free standing table with free standing chairs.  It can also be found with the table fastened to the wall.  This still is termed free standing as the chairs are stand alones

Open Wrap Around Dinette: This is a shallow “U” that provides seating for possibly up to three facing east/west.  The dinette table is generally supported by a single electrically powered “L” post.

Bar Like Counter:  This usually has only two seats.  It is basically a breakfast bar like arrangement that has two seats facing the bar on one side of the coach.

The booth dinette was, and probably is, the most common set up.  It provides a comfortable eating area with the two, or possibly more, people facing each other. The booth dinette is found in an entry level trailer or motor home, however it is also used exclusively in the Newell Coaches as well as being an option on many high end units.  Newell’s is particularly a great design.  Both the table and the opposing bench seats extend easily to make a two person booth a four place.

The free standing dinette is a popular choice and is available on many makes and models.  One would imagine that free standing chairs would not be a wise choice for a moving vehicle, but they are quite heavy and do not move or tip over during transit. I have had a free standing dinette in two coaches in the past, it worked very well.  If the table also is free standing, it gives you great versatility.  For six people dinner party’s, the table can be repositioned in front of the sofa to accommodate the bigger crowd.

The open wrap around dinette is probably the most striking design. This generally comes with a power table position allowing it to be controlled out and up.  In my opinion its looks exceed its practicality.  Because the table is supported by only one main leg, many have a tendency to be a little wobbly.  Access into and out of the seating area can be a bit awkward, particularly for older or larger people.  This design is currently found on many high end rigs including many conversions.

The bar counter dinette, can’t really be called a dinette.  To me, it’s like a lunch counter.  I honestly can not imagine how one could have a fine dinning experience sitting facing the wall or window eating off the narrow counter, might as well go to Mel’s Diner.  But, these are primarily found on Prevost and like conversions and perhaps those folks don’t often eat in.

I currently have the open wrap around type in my coach and have decided to replace it with a booth type.  I am using the coach manufacturer to do the work along with a couple of other changes.  This is something to keep in mind.  You are not necessarily stuck with the dinette you have.  Replacement or modifications are always an option.

So, what’s your dinette of choice? 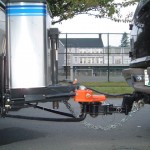