Had a fellow ask me “What kinda battery should I get for boondocking” as a result of my thoughts about boondocking BLOG. It is NOT an easy question to answer because the more you look at the battery market and talk to well meaning folks who may not really know that makes a battery tick or even worse is hearing all the different sales pitches, well – the more you might believe that snake-oil is what makes them critters huuummmm.

When we think of power we normally consider the 110-Volt electrical system for most things and the 12-Volt Direct Current (Vdc) for some of the lights or the water pump and that’s kinda the end of it – But our RV’s are dependent on the 12-Volt power systems to control or operate the furnace, water heater, refrigerator, operate fans, lights and safety devices throughout the RV, even if the device in question also uses propane or 110Vac. The key to problem free operation of the 12-Volt system is the basic lead-acid battery who’s technology has remained virtually unchanged for almost 100 years. Although improvements have been made in chemistry and construction, the common causes that promote battery failure due to sulfation have remained the same. .

While experts predict lead-acid batteries will be the primary source of battery power well into the next century we have problems in that most batteries can barely handle the overwhelming demands of today’s technologically advanced vehicles, let alone those of the future. It is interesting to note that there is actually enough reactive material in lead-acid batteries to keep them operating reliably for eight to ten years or even more, but, in most cases they don’t. The average life of a battery, depending on usage, is six to 48 months. But according to a recent study, only 30% of all batteries actually reach the 48-month point mostly due to improper care by the owner.

Basically, lead-acid batteries work on a principal of energy being stored as ions during the charging cycle then transferred from the ions to the lead plates during the discharge cycle. During this energy transfer process, the sulfate (S04) of the electrolyte reacts with both the positive and negative lead plates. At this point, a small portion of the sulfate does not return to solution as it should, thereby creating sulfur compounds building up on the plates.(The process is called sulfation.) This buildup is a physical phenomena of the electrochemical reaction that takes place within a lead acid battery. It is also a major contributing cause of battery failure.

The tasks performed by batteries include engine starting, supplying extra power necessary when the vehicles electrical load requirements exceed the supply from the charging system and act as a voltage stabilizer in the electrical system smoothing our or reducing high transient voltages which occur in the vehicles electrical system. To do these tasks more effectively batteries are made in three functional groups; starting, RV/Marine and deep cycle.

Battery’s used for engine starting have several thin plates that quickly produce the chemical transfer of energy. These thin plates also create large amounts of heat during the process which can warp or buckle them thereby shorting out the battery and in rare cases even break the case if forced into long term power draw such as extended engine cranking. This heating problem is worse when they put into an extended discharge cycle by being used as a deep cycle power supply because they aren’t built for that purpose. In any case, never discharge a starting battery below 20% if it’s rated amp-hour rating. For example,a 100Amp-hour (A/hr) starting battery should never be discharged below 80-A/hr

Deep cycle batteries have thick lead paste plates that can store large amounts of sulfuric acid and release it slowly to promote the chemical process. This provides large amounts of sustained power that is rated as the amount of current produced over a 20-hour period or until the battery level is lowered to 10.5-Volts. For example, the hands down favorite of RV’ers using solar power or doing extended camping without being plugged into power is the 6-Volt golf cart battery like the Trojan T-105 which has the ability to deliver 225-A/hr capability. Although deep cycle batteries can sustain high power drains for hours without being damaged they should never be taken below 50-percent of their rating… The best way to think about it is the more lead a battery has in it the more sustained power it will be able to deliver, so in practical terms, the heaver the better.

RV/Marine batteries are a compromise between the starting battery and the deep cycle units. In practice they don’t work well for RV’s who’s 12-Volt supply system is used exclusively for the house or in the case of motorhomes the house and a separate automotive system. Bottom line, don’t install RV/Marine batteries into your RV.

The standard lead acid wet cell battery is divided into chambers call “cells” that normally produce about 2-volts each so a 6-Volt battery will have three cells and a 12-Volt battery has six. The cells contain two or more plates of lead “sponge” material similar in appearance to a very fine foam sponge contained in a matrix where they are immersed in a bath of 30-percent sulfuric acid and distilled water usually called electrolyte. With this method of construction we have several problems. The largest is when a battery is pushed to full charge and produces hydrogen gas which is very explosive. The possibility of spilling the water/acid mix and the acid vapor that escapes the battery is also a threat to our safety and clothes. The last major item is the area where the battery is mounted becoming corroded from the acid fumes.

The functions that batteries fulfill has led to advanced construction and capability’s past the standard wet-cell battery to fit specific needs. The first effort to counter some of the problems of the wet-cell battery was to float oil over the top of the electrolyte to reduce the venting of acid vapor. This worked until vibration mixed the oil and water into an emulsion that could actually coat the plates and effectively kill the chemical process, sometimes after only a few thousand miles. PLEASE don’t ask me how I know about this !!

Next came the gel-cell or gelled electrolyte batteries which hold the electrolyte in a silica gel compound. It’s almost impossible to spill this mixture even if the case is broken but these batteries also have some problems. They must be charged at a much slower rate to prevent excess gassing from happening. Gassing comes from the heat generated while fast charging and the process actually creates bubbles in the mixture so that the gel mix doesn’t touch the plates and can permanently damage the battery. You must carefully follow the manufacturer’s guidance that require a longer charging period. Solar panels and three-stage regulated chargers will work with gel-cell batteries but difficulties of proper charging with alternators and generator equipment make most gel-cell batteries problematic for us.

Absorbed Glass Mat (AGM) batteries came about because the US Navy needed dependable and totally maintenance free batteries that could be mounted in any position without spilling the contents and without the problems of the gel-cell battery. The result is a deep cycle battery with very fine fiber boron-silicate glass matting between the plates or the lead actually being held in a pouch of this material. The matting is soaked in the electrolyte creating a “recombinant” battery where the oxygen and hydrogen recombines inside the battery without outside gassing so the battery retains almost 100-percent of it’s water during charging. The charge rates are about the same as the standard batteries and AGM units normally have the same charge and discharge limits of a normal deep cycle battery. In addition to the zero maintenance benefit the AGM has a very low self-discharge rate of only 1 to 3-percent per month compared to up to 20-percent for a wet cell battery. Price wise the AGM battery costs more then a wet cell unit but the benefits more then offset the expense.

Folks, the entire point of this rambling article is to assist you to making an informed decision in selecting replacement or upgraded batteries for your RV – hope it helped !!

Mark My Words: January – Getting Your RV Batteries Ready for the Road 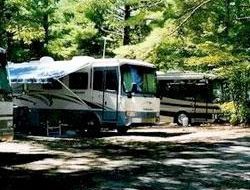