On Top of Ute Mountain…All Covered With Trees? Part 1

The invitation put out to the public read as follows: “This is a steep hike in a wilderness setting, with no trail” then followed with “Wear pants, long sleeves and sturdy footwear.” This would not sound very appealing to most people reading the notice, but we had been looking for an opportunity to climb Ute Mountain, or Cerro del Yuta, for more than a year. The BLM had led a climb last June that had had to turn back because of lightening at the top. The fact that it was in a remote, wilderness setting with no trail was a bit daunting and discouraged us from attempting to find the access to the mountain and try the hike on our own.

And there it was, last week, in the local newspaper. “BLM Ute Mountain Hike,” the notice read. It was an opportunity not to be missed, especially since no thunderstorms were predicted for the weekend so the likelihood of a successful mission was high.

We were instructed to meet at 8 am on a Saturday morning at a small gas station in Costilla, a tiny town on the Colorado/New Mexico border. You have to look carefully to find it and if you sneeze, you’ll miss it. Nonetheless, we headed north at 7 am in search of our destination. We arrived at 8, only to find that a number of people who were expected, had not. We waited around with the group until well after 8:30, then headed in caravan fashion, over to the mountain access. While the distance was only about 5-10 miles at the most, it took in excess of 25 minutes to make the trip as the roads quickly deteriorated from pavement to gravel to dirt to ruts, which only the high clearance vehicles could navigate.

The view from the start of the trail, looking out from Ute Mountain

As we were driving in, we noted one lone antelope raced across the road in front of us.  Daniel, from the BLM, explained later that there was a heard of antelope that lived in the terrain at the bottom of the mountain. Apparently a man from Colorado had years ago purchased many acres on the north side of the mountain and had drilled a well to pump water into two pools to provide water to the wildlife in the area. He had installed a number of solar panels on the land which powered the well pump. Though he had eventually had to get rid of the land, it, solar panels and well were taken over by the BLM, which maintained it so many forms of wildlife frequent the area.

There were about 20 of us that disembarked in anticipation of our climb, ranging in age from about 8 to over 70. We took a group photo, then divided ourselves into faster and slower hikers. Daniel, took the faster group and John, with the New Mexico Wilderness Alliance, who was traveling with his two young boys, the slower. We placed ourselves with the faster group and took off. One man quickly detached himself from the group, and it became Daniel’s task to hike with him because a resident from the area had informed us at the gas station that they were moving the cattle off the mountain as a mountain lion had been attacking them. Everyone was advised not to hike alone.

This left the middle of the group to fend for ourselves. When we asked for directions, we simply told to “Keep hiking up”. Terry and I hiked together but there were a number of other single hikers walking at varying paces on the trip.  We would see them occasionally, but for the most part they were alone. I would have been more comfortable if Daniel had stayed with the middle of the group and let the lone ranger strike out on his own and at his own risk.

This was a steep hike. After about an hour, we needed to stop at eat an apple and a Clif Bar to replenish our energies for the last part of the hike. And, while the first part of the hike had followed the remnants of an old rock covered road, that soon disappeared and we were left climbing over downed trees, branches, rocks and talus (piles of small rocks that regularly tip and give way when stepped on). Not pleasant hiking terrain.

Read more about Colorado camping and things to do in Colorado. 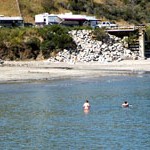