Make a Wi-Fi Hotspot with your Cell Phone

The Cradlepoint cellular router is very popular among RVers.  Most people use it for their Data Cards.  Plug the data card into the router and configure the router for your hotspot.  Now several computers can use that same Internet connection.  The router that we have will accept a Data Card, an Ethernet cable from DSL or Cable Internet, or a cell phone USB connection.

While we are parked for the season at Paradise Island RV Park in Fort Lauderdale, Florida – we decided to spoil ourselves and get a month-to-month DSL Internet connection.  The telephone cable comes in from the post outside (the yellow cable) and plugs into the modem and then to our Cradlepoint router.  The Cradlepoint creates a wireless network called ‘GeeksOnTour.’  We can both connect to that network and we have Internet supplied by the DSL cable. 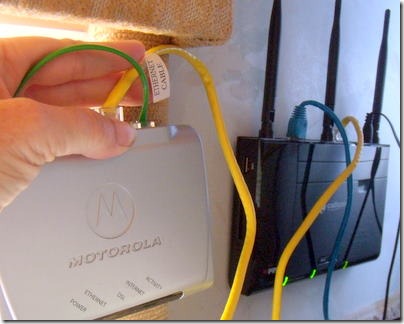 We’re on the road right now, headed toward Holiday Travel Resort in Leesburg, Florida where we are presenting some computer classes.  Then, on to the FMCA Southeast Area Rally in Brooksville, Florida.  As we pulled into our overnight site at Thousand Trails, Orlando – I felt a bit of panic.  I don’t have my DSL Internet here!  I called Verizon before we left Fort Lauderdale and asked that they turn on the Mobile Broadband Connect feature for the two weeks we’ll be gone ($49/mo) but I was wondering if I would remember how to get it set up.  I knew I had to plug the special cable into the phone, and then into the USB port on the Cradlepoint – but there must be something more?

Amazing!  As soon as I plugged the phone into the router – the phone started sending and receiving data.  I turned on my computer – it automatically connected to the GeeksOnTour network – and I was browsing away.  Every once in a while, technology just works, and it is good!  Of course, I’m sure I owe this simplicity to the real geek of the house, my husband Jim, who decided which router to buy and set it up in the first place. 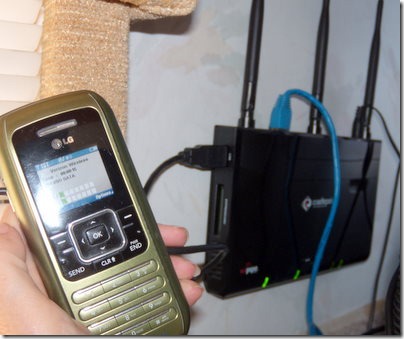 Jim recently got the Droid phone from Verizon and he has successfully tethered it to his computer via something called PDANet.  But, it doesn’t work to tether it to the Cradlepoint.  He’s still working on it.  I’m holding out for the Palm Pre Plus or Pixi Plus which will have the ability to be a Wi-Fi Hotspot without plugging into anything!

Make a Wi-Fi Hotspot with your Cell Phone

Are you Online while Driving?