Each summer we try to take at least one extended camping vacation where the destination is going to be as exciting for the kids as it is for mom and dad. Tough to do, but we thought a two-part trip to Cincinnati and Mammoth Cave would fit the bill.

We just got back, and the unanimous verdict is that everyone had a great time — even our teenager!

This, the first of a two-part post, will detail the trip to Cincinnati. The second post will talk about Mammoth Cave.

We left for Cincinnati on a Tuesday morning and later that afternoon got to our campground, Miami Whitewater Forest County Park. The best I can say about this campground was that we were one of only a handful of campers there for our two-day stay, so privacy was not an issue.

Our main complaint is that the sites were not level and the gravel pads were “crowned” like an old country road that slopes off at the shoulders. The “best” sites were 125-137. Most of the others were simply not suitable for an RV of any type, although a small pop-up might be okay.

Another negative: you had to drive past the campground and down to the boathouse near the lake in order to check-in. An inconvenience more than anything else.

A local said the county wanted to relocate the campground to another location in the park, but neighbors near that location protested and the idea was scrapped. The county then spent the money at the Winton Woods campground (which would have been nice to know before the trip).

Other than that, the park itself looks like a great place to take the family for the day. A lake with canoe, kayak and paddleboat rentals, trails, a playground, water park, Frisbee golf and an 18-hole golf course were just some of the amenities. Also, the staff was extremely friendly.

After setting up camp, we headed the 17-20 miles to the downtown to see the famous Cincinnati Zoo. We arrived at the entrance just as they closed for the night. Bummer. Nothing on their website mentioned anything about summer hours (I’m sure it’s there; we just didn’t see it).

But we refused to let that get us down! Instead, we looked up a restaurant that was featured on one of our favorite TV shows — Food Network’s Diners, Drive-Ins and Dives. And so we set off for Terry’s Turf Club. Tough to find — thank goodness for GPS navigation — but it turned out to be a great idea!

Terry’s Turf Club is a blast from the past. Its outside is crawling with retro signs and vintage kitsch. Old advertising banners mix with life-size metal people waving at passersby. Remember the old Texaco service station man? He’s one of those waving at you!

After an hour wait — the cook said it was a slow night — we made it inside. The dining room was small, cramped, loud and full of more vintage neon and retro advertising signs and clocks and posters and … you get the idea. The whole place only seats about 50, but that probably helps maintain the quality of the food.

Ah yes, the food. Delicious! They lay claim to the best hamburgers in Ohio, and I whole-heartedly would endorse that. Some insist on adding the goat cheese, others want their’s bare. I got mine with caramelized onions and infused cheddar. Other members of the Gr8LakesCamper family enjoyed the BLT’s (six slices of bacon per sandwich). Other items on the limited menu included the filet-mignon chili and crab legs. The patrons were just as eclectic as the decor — suit-and-tie types mixed with the flip-flop crowd, and the ages ranged from families, to college kids, to Boomers, to Boomer-makers.

The following day we took in a Cincinnati Reds game and then, finally, the zoo. We’re a big baseball family, so we try to get to a game wherever we go and we collect a souvenir baseball from each stadium. The consensus on the Great American Ballpark was five enthusiastic thumbs-up. Same thing with the zoo; got to watch a bobcat no more than 3 feet away stalk something in the bushes, and a somersaulting, peekaboo-playing orangutan kept us entertained for several minutes.

That night it was my turn to cook. Honey BBQ-marinated Kansas City steaks cooked over the campfire. It was so good I don’t even remember the side dishes. Okay, yes I do. Green beans and potatoes.

The last thing about Cincinnati before I close out this post: Beware of their smarter than average raccoons. One of those buggers was able to unlatch our cooler and eat ALL of the fruit — pineapple, plums and blueberries. Luckily, he left the 12-ounce refreshments intact.

Gr8LakesCamper celebrates the world of RV Camping in the Midwest. Gather around the campfire and share tips, ideas and stories on RVing, camping and travel destinations. Follow Gr8LakesCamper on Twitter, Facebook and the personal blog. 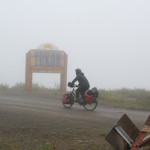 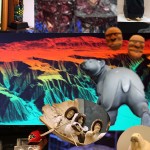 Fun and Camping on the Water