Washington is blessed with some of the most diverse natural beauty in the country, with snow-capped stratovolcanoes, moss-covered rainforests, and rugged coastlines dotted with sea stacks. With three national parks and numerous monuments, the state offers visitors the chance to witness migrating orcas off the coast, alpine meadows covered in wildflowers, moss-laden forests, and a look at one of the country’s most infamous natural disasters. From sea level to 14,000 feet, elevate your senses with a trip around Washington’s majestic national parks.

Spanning close to a million acres, this pristine national park named after the peninsula it calls home is one of the most naturally diverse areas in the lower 48. Within its untouched reaches, you can explore 73 miles of coastline, hike to glaciated mountain peaks, and enjoy the lush scenery of four different rainforests. Additionally, the park supports an abundance of wildlife, including the largest wild herd of Roosevelt elk in the Pacific Northwest. With 95% of the park designated as wilderness, there are endless outdoor opportunities for those who seek nature’s solace.

The Hall of Mosses. Photo: @CateBattles

If Sasquatch lived anywhere, it’s got to be the Hoh Rainforest. This dense matrix of moss, old-growth giants, and sprawling ferns is a place you could easily hide out and never want to leave. Well…. maybe during the rainy season. To put it into perspective, Seattle receives an annual rainfall of 36 inches a year — a pretty substantial amount by any means. However, in comparison, the Hoh receives upwards of 14 feet of rain a year and an additional 30 inches in the form of fog — resulting in one of the lushest temperate rainforests in the Northern Hemisphere. The crown jewel of the Hoh is the Hall of Mosses, a short interpretive loop trail lined with ancient Sitka Spruce, Red Cedar, Douglas Fir, and Big Leaf Maples.

Jagged rocks and sea stacks are scattered up and down the coastline. Photo: @CateBattles

From Kalaloch to Shi Shi Beach, the 73 miles of undeveloped coastline is scattered with towering sea stacks, massive sea logs, colorful tide pools, and cliffs that seem to dive into the ocean. Offshore, whales, sea otters, dolphins, and sea lions call Olympic home. It’s also the ancestral land to 8 different indigenous tribes that have lived in this region for thousands of years.

Located near Port Angeles, Hurricane Ridge is the most easily accessed mountain area within Olympic National Park. During the warmer months, visitors can enjoy panoramic views along the ridge top or hike down to sub-alpine lakes and valleys. In the winter, take advantage of their ski and snowboard area or bring your snowshoes. No matter what season, at almost a mile high, you get spectacular views of the Olympic Mountains, the Strait of Juan de Fuca, and can even see into Canada.

Diablo Lake gets its brilliant color from the glacial flour that flows off the mountains. Photo: @CateBattles

Tucked away along the border of Canada, North Cascades is nicknamed the American Alps, and it’s easy to see why. With 1,000 square miles of jagged peaks, cascading waterfalls, and over 300 glaciers, this remote wilderness is home to a single road, and the perfect spot to find solitude. The North Cascades National Park Service Complex is comprised of 3 parts including the National Park, Ross Lake National Rec Area, and Lake Chelan National Rec area. With over 400 miles of hiking trails, turquoise-colored lakes and rivers to boat, and 9,000ft peaks to mountaineer, there are endless opportunities to enjoy the great outdoors.

Being one of the least visited parks in the country, the area is home to an abundance of wildlife, including wolves, mountain goats, grizzlies, and marmots who thrive in remote terrain. With over 75 species of mammals and 200 species of birds, this is a prime locale for wildlife viewing….just make sure to hike with bear spray!

Leavenworth is one of many great stops along the Cascades Scenic Loop. Photo: @CateBattlesWhile visiting the park, take the scenic drive along North Cascades Highway that threads through the mountains, passing numerous lakes and overlooks. Get a birds-eye view of the iconic Lake Diablo, a reservoir created along the Skagit River, whose vibrant turquoise water can be attributed to glacial flour that flows off the mountains.  The highway connects to the greater Cascade Loop scenic drive that passes through the Bavarian- styled village of Leavenworth, where you’ll find beer gardens, charming boutiques, and a multitude of festivals throughout the year.

You’d be hard-pressed to find a more majestic view than that of Mount Rainier, the massive stratovolcano looming over the rest of the Cascade Range at 14,400 feet above sea level. Being the most glaciated peak in the 48 contiguous states and a domineering icon of the Cascade skyline, the mountain can be seen all the way from Corvallis, Oregon and Victoria, BC–both about 300 miles away. In late summer, witness an explosion of color as billions of wildflowers blanket the mountainsides, and most famously, Paradise meadows. It’s no surprise John Muir referred to it as “the most luxuriant and the most extravagantly beautiful of all the alpine gardens I have ever beheld in all my mountain-top wanderings.”

The park, which is centered around this sleeping giant that last erupted in the 1890s, is home to a diverse ecosystem that includes the Carbon River Rainforest, low and high elevation wetlands, dazzling wildflower meadows, alpine and sub-alpine lakes, as well as the world’s largest volcanic glacier cave system.

To enjoy the highlights of the park, catch the sunrise at Sunrise, the highest point that can be reached by vehicle at 6,400ft. At sun up, the alpenglow illuminates Emmons Glacier, providing a jaw-dropping view of the mountain. While there, enjoy nearly 360 views of the surrounding Cascade Range including Mount Adams, Baker, and Hood.

Myrtle Creek Falls is one of many spectacular waterfalls within the park. Photo: @CateBattles

If being surrounded by an infinite sea of wildflowers sounds like heaven, head over to Paradise, nestled on the South slope of the mountain. In late summer, lupine and Indian paintbrush are a few of the many species of wildflower that cover the meadows. Here, you can enjoy both paved and rustic hiking trails that wind through colorful flower fields, passing waterfalls like the iconic Myrtle Falls, and a multitude of glaciers. This is a very popular spot, especially at the peak of flower season, so arrive early to enjoy more solitude.

Reflection Lake is one of the most iconic scenes of the park. Photo: @CateBattles

One of the most photographed locations in the park can be found at Reflection Lakes, which so perfectly mirrors the snow-capped peak above it. Photographers flock to the location to capture the bordering wildflowers during the summer months and the vibrant reflections of autumn colors during the fall. From the parking lot, you can access several fantastic trails including the hike to Pinnacle Peak, which offers panoramic views of the Tatoosh Range, or the trail to Bench and Snow Lakes.

For a different view of the mountain, head over to Tipsoo Lake located on the Eastern edge of the park along Chinook Pass. This is another easily accessible lake in Rainier that requires only a short walk to get to the parking lot and is the perfect spot to capture the sunset. From there, you can take the Naches Loop Trail or if you’re looking for a pet-friendly hike, just down the road outside of the park boundary, is the hike to Sheep Lake that features beautiful wildflowers in late summer.

Though not a national park, it would be a mistake to pass up the chance to visit the country’s first designated national volcanic monument located just south of Mt Rainier. Established in 1982, shortly after the 1980 eruption, this infamous stratovolcano offers visitors the opportunity to witness the aftermath of the world’s largest debris avalanche in recorded history. The 110,000-acre monument was set aside for research, recreation, and education, and since its inception, the public has been able to enjoy its many hiking trails, lakes, canyons, and scenic highways.

The eerie beauty of Mt St. Helens is hard to find anywhere else in the country. Between the large swaths of lava flows, log-matted lakes, and the skeletons of old-growth forests, it’s hard to imagine this place transformed in just a matter of moments. It was clear there would be an imminent eruption when a 4.2 earthquake rocked the area on March 20th, 1980. After 123 years of peace, the giant had awakened and over the next two months, rising magma pushed the north flank of the volcano outward 5 feet per day. When the north face of the once symmetrical mountain top collapsed, its summit was reduced 1,300 feet and it sent a massive rock and ice avalanche down spirit lake, over a 1,300-foot-ridge, and 14 miles down the Toutle River- cloaking in the area in a layer of mud. Additionally, a cataclysmic explosion of pressurized gasses blasted rock and wind across 150 square miles and sent a column of ash thousands of feet into the air. Within just 3 minutes, the lateral blast traveled more than 300 miles an hour and scorched over 230 square miles, destroying anything in its path, including 57 people.

The park is spliced into two sections, with the most visited part situated Northwest of the mountain in the heart of the blast zone. Driving along state route 504, you follow the Toutle River 52 miles until you reach the terminus at Johnston Ridge Observatory. Along the scenic road, you’ll find several educational kiosks as well as overlooks offering views of the crater, blast zone, and Toutle River valley. The observatory, named after David Johnston, the volcanologist who lost his life in the explosion, hosts interpretive displays that tell the geological, biological, and human story of Mt St. Helens. It also houses seismic, deformation, and other monitoring equipment for the most active volcano in the contiguous United States. While there, you can also access the Harry’s Ridge Trail, the monuments most popular trail that rewards hikers panoramic views along the 8.5-mile trek.

Located on the Northeastern side of the decapitated monolith, Spirit Lake was once a popular tourist attraction and home to multiple camps and lodges, most notably, the Mt. St. Helens Lodge owned and operated by Harry R. Truman who died in the blast. After the eruption, the landslide completely buried the old crystal watered lake, and layers of volcanic ash, tree limbs, and mud raised the lake by 200 feet.  Today, despite being much shallower, it covers a wider area and receives fewer visitors than the Johnston Ridge, which is more easily accessible. While there, plan a hike along the Windy Ridge Trail that offers a commanding view of the log-matted lake, crater, and Mt Rainier in the distance.

Named after an alleged Bigfoot encounter in the 1920s, Ape Canyon can be found on the southeastern corner of the national monument. The hike follows a ridge that formed from the eruption’s landslide and meanders through old-growth forest, blast zone, and eventually makes its way to the Plains of Abraham. There, you’ll find a dazzling wildflower display and views of Mount Adams and Rainier. Just down the road from Ape Canyon is Lava Canyon, an excellent trail that showcases basalt cliffs, cascading waterfalls, and a suspension bridge for those brave enough to cross it.

To explore one of North America’s longest lava tubes, head over to Ape Cave, a 2.5-mile-long subterranean passageway formed by molten lava. The cave remains a steady 42F degrees throughout the year and is lined with stalactites, stalagmites, and sections with boulders that hikers must scramble. 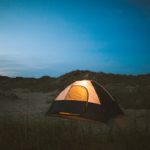 Camping In the Outer Banks, NC Previous
5 Must-See RV Destinations on the East Coast Next 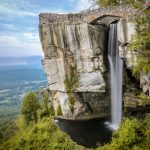