Transporting A Firearm Across State Lines

So your family is crossing the country to see Aunt May and Uncle Joe. And,  they love to go target shooting and hunting with you. Do you know the rules for gun transporting across state lines?

Transporting a firearm across state lines in the U.S. is normally not a problem as long as you follow the gun transport laws laid out by the Gun Control Act which is enforced by the Bureau of Alcohol, Tobacco, Firearms and Explosives.

Federal gun transport laws provide that any individual (except convicted felons, persons under indictment for felonies, mental defectives or incompetents, illegal users of controlled drugs, illegal aliens, veterans dishonorably discharged, those who have renounced their U.S. citizenship, fugitives from justice, persons convicted of a misdemeanor crime of domestic violence, and persons subject to domestic violence restraining orders) may transport a firearm from one location where the individual is lawfully allowed to posses and carry a firearm to another location the individual is lawfully allowed the firearm, as long as it is unloaded and not in the passenger compartment of your car, which normally means in the trunk.

But, what about in your RV, where you have no trunk? Gun transporting in your RV across states lines is basically the same; the gun should be unloaded and stored in the back of the RV in a locked compartment. It should never be in the glove box or console. The key to transporting a firearm is that it should never be where you or anyone else can get to it easily and it must be unloaded.

State and local gun transport laws vary from place to place and it is your responsibility as the gun owner to research the laws of the area you are visiting or passing through. A good case in point is Chicago. The City of Chicago, Illinois requires every firearm possessed in the city to be registered. Chicago does not register handguns that were not previously registered there. There are places that do not allow possession of any handgun. California has strict regulations that may require a California permit and registration for specific semi-automatic rifles, semi-automatic pistols, shotguns and any other firearm that is considered an “assault weapon” before you enter the state. 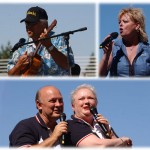 The Rally's Got Talent Contest - Open Call to all... Previous
National Parks Week offers free admission this week,... Next

Transporting A Firearm Across State Lines