It seems, my friends, that the sun blotting trailers of yesteryear are quickly giving way to the sub-compact micro-trailers. While I’m all in favor of increased fuel economy and parking in one zip code, I wonder how far this trend will go. While perusing the new units at the Hershey RV show last year, I asked a dealer why there were holes in the wall at the end of the bed.

And so it goes. As I pondered the idea of waking up in the wee hours with an unknown creature of the wild licking my toes, I had to admit that some of these manufacturers were getting downright crafty in their designs. I saw outside kitchens, TVs that dropped from the ceiling, and a dinette that expanded into a dance floor, complete with the cheesy DJ.

Okay I made that last one up. But you get my drift. I assume, the laws of physics being what they are, that we’ll eventually hit a minimum size trailer. Unless you work for Ringling Bros. and wear a red nose, you might demand enough room to inhale (insert Bill Clinton joke here).

But why fight it? If you can get a 20′ trailer with all the modern luxuries and tow it with your Moped, rock on! We’re certainly not fighting it. For sixteen years Hensley Mfg. has built trailer hitches geared toward the mobile estate. And we’ve built them well. So well, they’ll work on any sized trailer.

“But it looks so big on my trailer!” you cried.

Fair enough. Aesthetics are everything. So we designed smaller hitches for smaller trailers. It seemed risky, because we thought that folks with smaller trailers don’t have much issue with trailer sway or, in the case of 5th wheelers, bouncing.

We were wrong. What we failed to consider was this: you’re not just buying smaller trailers, you’re buying smaller tow vehicles as well (i.e. the aforementioned Moped). While you may not feel the sway or bounce of a small trailer with your ¾ ton truck, you’ll definitely notice it when you go to the more fuel efficient models. By the way large truck fans, the sway is there, just ask the guy behind you. Yes, that’s him, the one slowing down to put a state or two between you and he.

And you were right. Since we’ve launched the Hensley Cub for small trailers and the TrailerSaver BD3 air-ride hitch for smaller 5th wheels, they’ve taken off. So much so that we’re back to the drafting table (yeah, I know…so twenty years ago, but it’s a nice image) to see how much more we can scale it back.

These are exciting times in the RV industry. New ideas often spring from a tough economy. And nowhere else is it more clearly displayed than in the auto and RV industries. If you haven’t been to an RV show in years, go! You’ll be amazed at what they’re doing with those little boxes on wheels. Then give Hensley a call to see what we’ve got to fit your new compact, efficient, yet stylish camper.

For more information on the Hensley line of anti-sway hitches or the TrailerSaver line of 5th wheel hitches, call 1-800-410-6580. Check out their websites at www.hensleymfg.com and www.trailersaver.com. 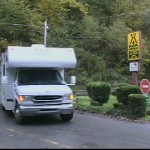 Why Weight Distribution and Sway Control Are So Important