RV Doctor – Slideout Catching on Linoleum – Can I Replace It and How?

Dear RV Doc,
The kitchen area in my motorhome is linoleum and the rest carpet. The factory replaced the linoleum once under warranty due to buckling and fracture. This was caused from the kitchen slideout roller coming across the linoleum when the slideout was moved in for transporting. Now, six years later the linoleum is doing the same thing and curling at the edges under the kitchen slideout causing the slideout to catch the edges when moving in and out especially in cold weather. I must replace the linoleum again as it is damaged from the above explanation. If I replace with linoleum again is it a good idea to glue it down? The factory did not do so either originally or with the replacement. I am also thinking of maybe going to a floating laminate flooring which might be better to resolve my problem. What is your opinion? How difficult is it to remove that kitchen slideout to properly get the new flooring under the slideout? I contacted the factory for information but received no answer whatsoever. Your opinion and help would be greatly appreciated. – Larry Reeves, (Metamora, IL)

Larry, I’m not fully convinced every single factory actually glues the complete floor area due to the time and effort involved. If the edge of the linoleum is exposed to the slideout floor it is bound to start catching and peeling eventually regardless of how it is fastened.

A properly designed slideout should have a wedge of Teflon or other low friction material running along its entire length. The edge of the carpet or floor should be secured under this strip. That way, the slideout contacts and is guided by the Teflon and never actually contacts the edge of the linoleum or carpet.

When replacing linoleum the pros glue it down completely. It makes for a better, longer lasting repair. Laminate flooring is nice, but often not practical with some slideout designs.

If the slide is currently catching on the linoleum, it is likely that laminate flooring will be too thick to allow enough clearance for the slideout. When the slideout is extended, it typically rolls across the floor and then “slides” down a slight ramp to sit flush with the rest of the coach floor. When it is retracted, it moves up the ramp then rolls back along the floor again. The laminate floor likely would be too thick and therefore sit higher than the top of the wedge, creating a significant lip at the top of the ramp, resulting in a possible jamming situation. There is certainly no sense trying to replace the linoleum unless you can get it underneath the slideout, as you indicated.

This is not typically a do-it-yourself project. Most RV dealerships are properly trained and have the necessary equipment to partially and fully remove slideouts. Although it is fairly straightforward to install linoleum, it is not truly feasible to remove the slide without this training and equipment. I would recommend that you have a qualified RV repair facility investigate this in the hopes that they can remedy the problem rather simply. 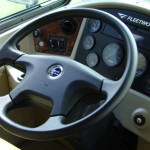 Who is that driving the motorhome? Previous
Bottle House Next 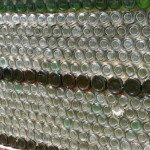 The RV Doctor – Correct Care & Maintenance of Your RV Slideout