The RVs rolled in to Albuquerque this week for the 2009 version of The Rally. RVers packed the seminar rooms curious to see what’s new and to find out about places they have yet to visit. They took bus tours of the many attractions surrounding Albuquerque, toured dozens of new motorhomes, trailers, and fifth wheels, and scoured the trade booths for the latest goodies and gadgets. And, of course, for the latest ways to green their RVs, reduce fuel costs, and restrict their use of non-renewable natural resosurces. I was hoping so, anyway.

But one RVer did more than just think about ways of going green. Max Snider of Vincennes, Indiana drove his 38-foot Country Coach all the way from Indiana to The Rally on recycled vegetable oil. He retrofitted his coach in late 2007, utilizing such items as recycled lines and fittings from an old truck and salvaged copper tubing, to transport the veggie oil from its own tank to the engine at the throw of a switch on the dash.

Max starts his diesel engine and lets it warm up (he can run on all diesel if he can’t find vegetable oil), then throws the switch sending the recycled veggie oil to the engine in place of diesel fuel, then returns the engine to diesel just before shutting down so it will start again. Max also points out that the cost of his veggie oil is about $.50/gallon, which “includes labor, pick-up, processing, filters, etc.” He only used $30 worth of diesel fuel  for the trip to The Rally.

As for veggie oil’s green credentials, it is made from crops grown by American farmers, it has drastically reduced his use of foreign oil, reduced his CO2 emissions from burning less fossil fuels, is biodegradable, low sulhur, and he has seen no drop in fuel mileage. And he points out that vegetable oil is safer than diesel fuel with a flash point of 480 degrees compared to 165 degrees for diesel.

You can see Max’s Country coach at The Rally in the Balloon Park’s Main Street Lot in Row A, Site 30. And bring your used vegetable oil. 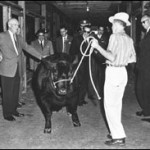