I  recall Andre Agassi in his heyday;  good looking in a foppish, hot pants wearing, hyped-up adolescent sort of way. I didn’t play tennis then; don’t play now, and frankly, don’t give a rip about the sport. But I know when I’ve netted a great read and Andre Agassi’s memoir, “Open,” qualifies. If you’re looking for excuses to avoid draining black water or fixing the thousandth sandwich for the troops, download or get a copy of Agassi’s “Open” ( with J.J.Moehringer serving brilliantly as Agassi’s collaborator).

Agassi’s sometimes funny, frequently dark, and always frank memoir is the real deal. He reveals heartbreaking details about his life long loathing for tennis and his tormented relationship with his father, Mike Agassi. You’ll not soon forget Mike Agassi’s road rage as it terrorized six year old Andre seated beside him;  talk about writing on the tablet of a child’s life. Equally memorable is “the dragon,” a customized ball machine created by Agassi’s father. The “dragon” drilled  2,500 balls a day at 110 miles per hour at seven year old Andre in the Agassi family’s Las Vegas backyard.  Agassi’s outrageous behavior on and off court seems understandable (albeit still unlikable) when  scrutinized under the light of his feelings about tennis, his father, and himself. I read this book and no longer wondered how Agassi exhibited such arrogant, attention-getting  traits during his career. The real wonder is that he isn’t a full blown maniac. “Open” could justly be considered a “How to Raise a Seriously Messed Up Kid” non-fiction book, as well as a memoir.

Agassi put little energy into making people look good, including himself.  Rather,  he seemed satisfied to reveal aspects of his own self-absorbed, ungrateful self right along with the unattractive side of others (as he saw them, anyway. His remarks about his competitors, along with  details and strategies of famous matches, are worth the price of the book).  Agassi seemed to understand why critics consider his complaints fatuous.  And he acknowledged that children elsewhere have had it worse. None the less, stark appraisal makes for good reading. Noteworthy is that Agassi leaves somewhat unanswered the question, “While it was awful, on some level, was it worth it?” Perhaps he can’t answer it.

As a mother, I grieve for Agassi’s childhood. As a teacher, I cringe at his tennis academy’s and his father’s coaching methods. As a friend, I respect Agassi’s loyalty and love for those closest to him. And as his fellow citizen on this complex walk called “life”, I admire that Agassi  has channeled his pain and resources into a cause; not a made- for- Hollywood cause, but a tangible, “make a huge difference in kids’ lives” kind of cause. Andre Agassi’s self-realizations led him to improve children’s lives in notably unglamorous sections of his hometown, Las Vegas.  He’s raised and donated millions building  a charter acadamy for those disadvantaged kids.  Now that’s a place I’d like to visit in Las Vegas.

Yes,  Andre Agassi’s memoir certainly reveals the secrets and successes of the  flamboyant, world-renown tennis superstar. But maybe, at heart, “Open” is simply the story of a little boy’s survival. 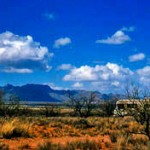 The Zen of Boondocking - Part I Previous
You Can Run, but You Can't Hide Next