GPS Navigation with Netbooks and Droid

We love GPS systems.  Maybe too much!  All of a sudden we have more GPS navigation devices than coffee cups!  And we can’t decide which one we like best.  So, we’re using them all.

We’ve been using Microsoft Streets and Trips on a laptop since the beginning of our travels in 2003.  Actually, the first 2 years it was Mappoint –  S&T’s big brother – but basically the same thing.  See this previous article about that.  A couple years ago, we got a Garmin Nuvi 255 – a dashboard navigation device.  And just a few months ago we bought our Motorola Droid cell phones which includes GPS and a Navigation application for free. 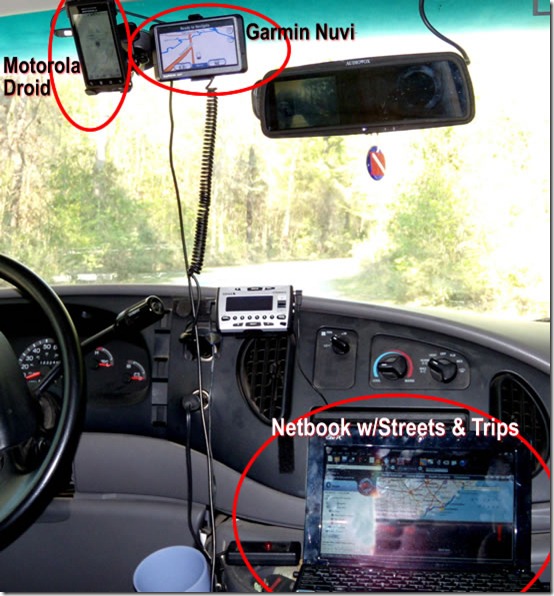 The photo above is what the cab of our Class-C motorhome looks with all three navigation devices.  It’s tough to get a good photograph of this, but hopefully you got the idea.  What you can’t see is that I am usually sitting in the passenger seat with a large print Road Atlas on my lap to keep me grounded in the midst of all these screens.

Jim always plans our travels using Streets and Trips.  Every route we’ve ever plotted is stored on a S&T file somewhere.  It’s so easy to see the entire route (8,174 miles planned for this summer) or zoom in on one spot.  And, with the Points of Interest megafile, we are assured of finding anything we want like a Thousand Trails park, a Walmart, a Flying J, or a hot springs!

One problem with using a GPS system on your laptop is how hard it is on the laptop.  They are made to be portable, but I don’t think the constant vibration or the teeth shattering drive on I-10 thru Louisianna was part of the designers’ plan.  We recently purchased an ASUS NetBook – it’s our spare computer since both Jim and I have our own laptops.  We’re wondering if it can do the job of being the Streets and Trips computer.

Testing the Netbook for Streets and Trips Navigation

It’s so small it sits nicely on the center console.We don’t even need to bungie it in,  And it’s so light, I don’t think it feels the bumps and jolts as much as the bigger laptops.  We also don’t need to plug it in because it has 7 hours of battery life.  This is much more convenient than the larger laptop.  Streets and Trips installed just fine on the Windows 7 operating system, and I was delighted when I plugged the GPS receiver into the USB port and our position was displayed almost immediately. We have had trouble in the past with the GPS receiver being recognized.  This was a good sign.

BUT – after using it for a couple 300 mile days – I don’t think the little netbook is going to hack it for our Streets and Trips computer. The screen is just too small, and there’s not enough horsepower to run Streets and Trips well.

Testing the Droid for Navigation

Truly amazing!  We’ve started using the Droid for our navigation around town instead of the Garmin Nuvi.  After all, your cellphone is always with you right?  So, if you need a GPS, how cool is it to just get out your phone and turn it into a GPS navigation device?  It uses satellite GPS to get your position.  It uses Google Maps via it’s Internet connection for the maps.

It works pretty good.  Jim purchased the optional car docking station – he tells me that he didn’t spend more than $30 for it.  Here’s what it looks like, mounted right next to the Garmin Nuvi.  It can also be mounted horizontally and the map display changes accordingly. 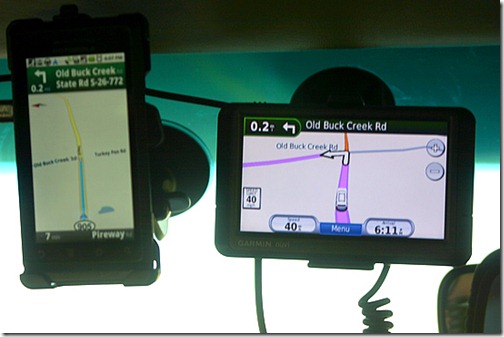 It didn’t have any disagreements in directions that we noticed.  It’s speaker is almost as good as the Nuvi.  One advantage is the voice recognition.  Jim said in a loud voice, “Navigate to Patriots Point” when we were driving through Charleston.  And, it did!  Later I spoke at the Droid saying, “Navigate to Myrtle Beach State Park” and it responded by displaying, “Navigate to Royal Beach Skatepark?”  The road noise is a problem.

I’m tempted to say that the Droid can replace the Garmin Nuvi, but I’m sure I will change my tune when we’re in West Texas or Eastern Oregon this summer.  That’s because the maps are displayed on the Droid via the Internet.  It gets the Internet from the nearest Verizon tower.  No tower, no Internet, no roads!  Your position comes from the satellite GPS, so you’ll still see the marker for your position moving around the screen.  But you won’t see the map – so it doesn’t do you much good.

So for now, we need them all.  I’ll update this topic when we’ve learned more.  Meanwhile, anyone else out there using a netbook for navigation?  Or the Droid?

RV Doctor - Why Does The GFCI on My Brand New RV Keep... Previous
A New Family Tradition Next

Trip Planning with Streets and Trips