Before the days of cable television, computer video games, and the internet, kids of my generation sought entertainment at the local movie theater, where the cowboy was king. The Gene Autry Oklahoma Museum in Gene Autry, Oklahoma remembers those gold old days and preserves them in a time capsule of movie memorabilia. 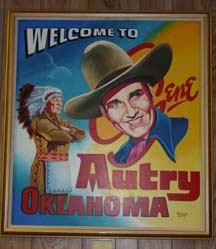 It is fitting that the museum be located here, since the little town itself changed its name from Berwyn to Gene Autry in honor of the famous cowboy movie star when he purchased a ranch adjoining the community.

The Gene Autry Museum displays an outstanding collection of memorabilia from not only Gene Autry, but other silver screen cowboys, including Roy Rogers, Rex Allen, Tex Ritter, Jimmy Wakely, Eddie Dean, and others who appeared in the much-loved musical Western movies of the 1930s and 1940s.

Several rooms display movie memorabilia, stage costumes, guitars used by the various singing cowboys, and hundreds of photographs, and the hallways are lined with Western movie posters. An hour or two spent at the museum will take you back to the time when life was simple and heroes were real. These cowboy stars were role models we wanted to emulate, not like today’s drugged out and spoiled alcoholic “celebrities.”

The museum also displays clothing and other items owned by many of the cowboy movie stars, including Gene Autry, Tex Terry, Patsy Montana, and Dale Berry.

What child growing up in the days when cowboys rode tall, shot straight, and only kissed their horses can forget the toys the movies inspired? The museum has a wonderful collection of toy guns, Marshal’s badges, comic books, even Gene Autry bicycles and tricycles! I wanted to pull them all out of their showcases and escape to childhood again! If you remember those great old Saturday matinees, this is one place you don’t want to miss!

Twenty-five prints of John Ford’s Cowboy Kings of Western Fame series are also displayed. The complete set is one of only 500. The original paintings, by movie poster artist Will Williams, are part of the collection of the Booth Western Art Museum in Cartersville, Georgia.

In addition to the displays about cowboy movie stars, the museum displays local historical items. I found the display on local county sheriff’s very interesting. The museum also includes a small gift shop, where visitors can shop for books and souvenirs of their visit, including photos and posters of the old film stars, CDs of their recordings, and videos of their movies.

Every year the museum hosts the Gene Autry Film & Music Festival in September, on the weekend closest to Gene Autry’s birthday, September 29th.  The event brings headline entertainers who come to celebrate the heroes of yesteryear.

The Gene Autry Museum is located in the renovated school building in the tiny town of Gene Autry, Oklahoma, just a short drive off Interstate 35. The Museum is open Monday through Saturday from 10 a.m. to 4 p.m. and is closed on Sundays. We had no problem parking our bus in front of the museum, and the volunteer staff is very friendly. For more information on the Gene Autry Museum, call (580) 294-3047 or e-mail [email protected].

Flip Flop Warning Previous
Time for a Brake Next