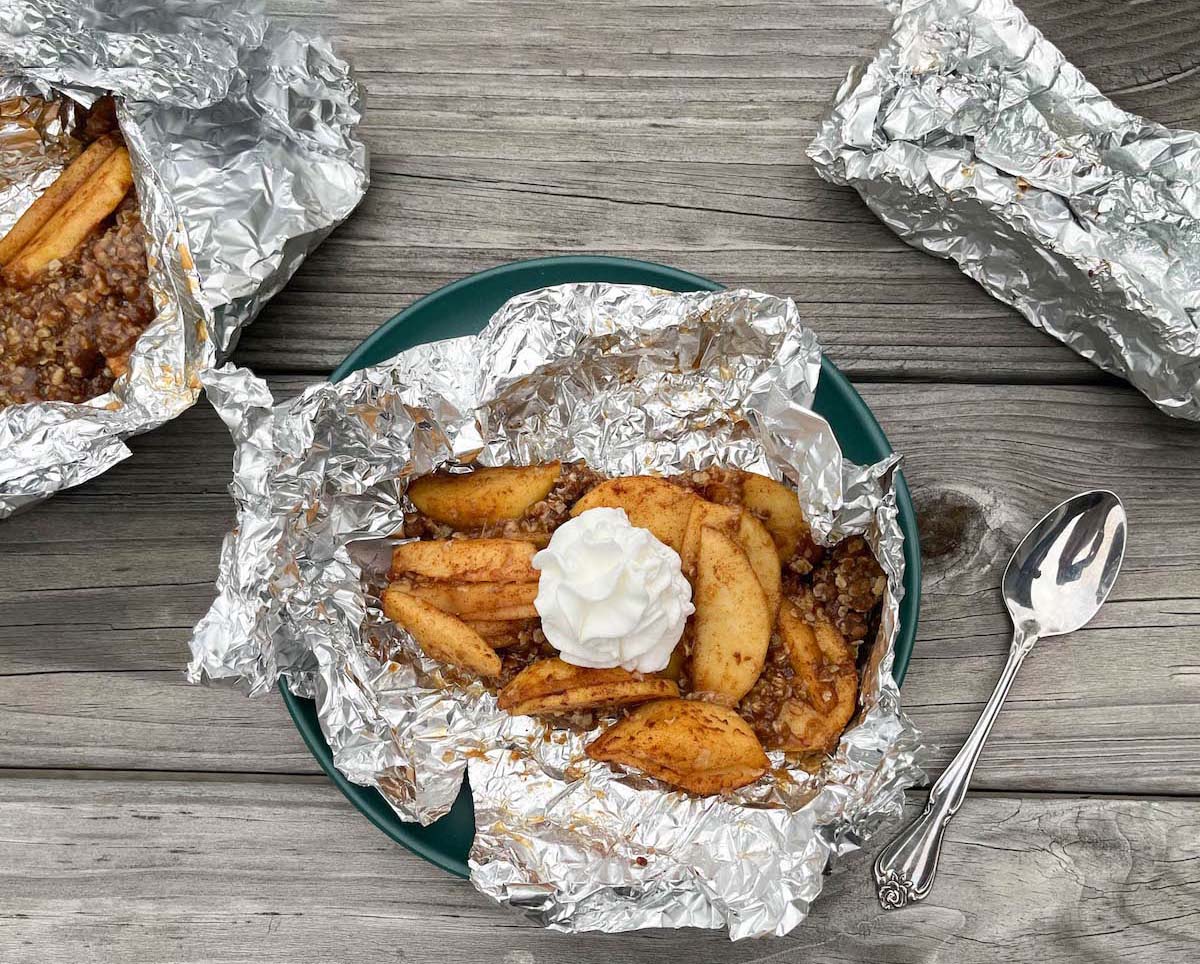 Fall is in full swing, and that means it’s time for all things apple! If you’re an apple lover, it’s the perfect opportunity to start cooking with these delicious fall fruits. In fact, October is National Apple Month, so why not whip up a tasty apple treat on your next camping trip?

Apple crisp is such an easy and delicious dessert, which makes it perfect for camping trips! The cinnamon and sugar go so well with the crisp apples and oat topping in a way that just screams “fall.” But while most apple crisp desserts need to be baked in an oven, this foil packet recipe is easy to make at the campsite and can be cooked over the fire, on a grill, and yes, in a tiny RV oven. You can even prep some of the ingredients at home, which makes this dessert even easier when you’re on the road! 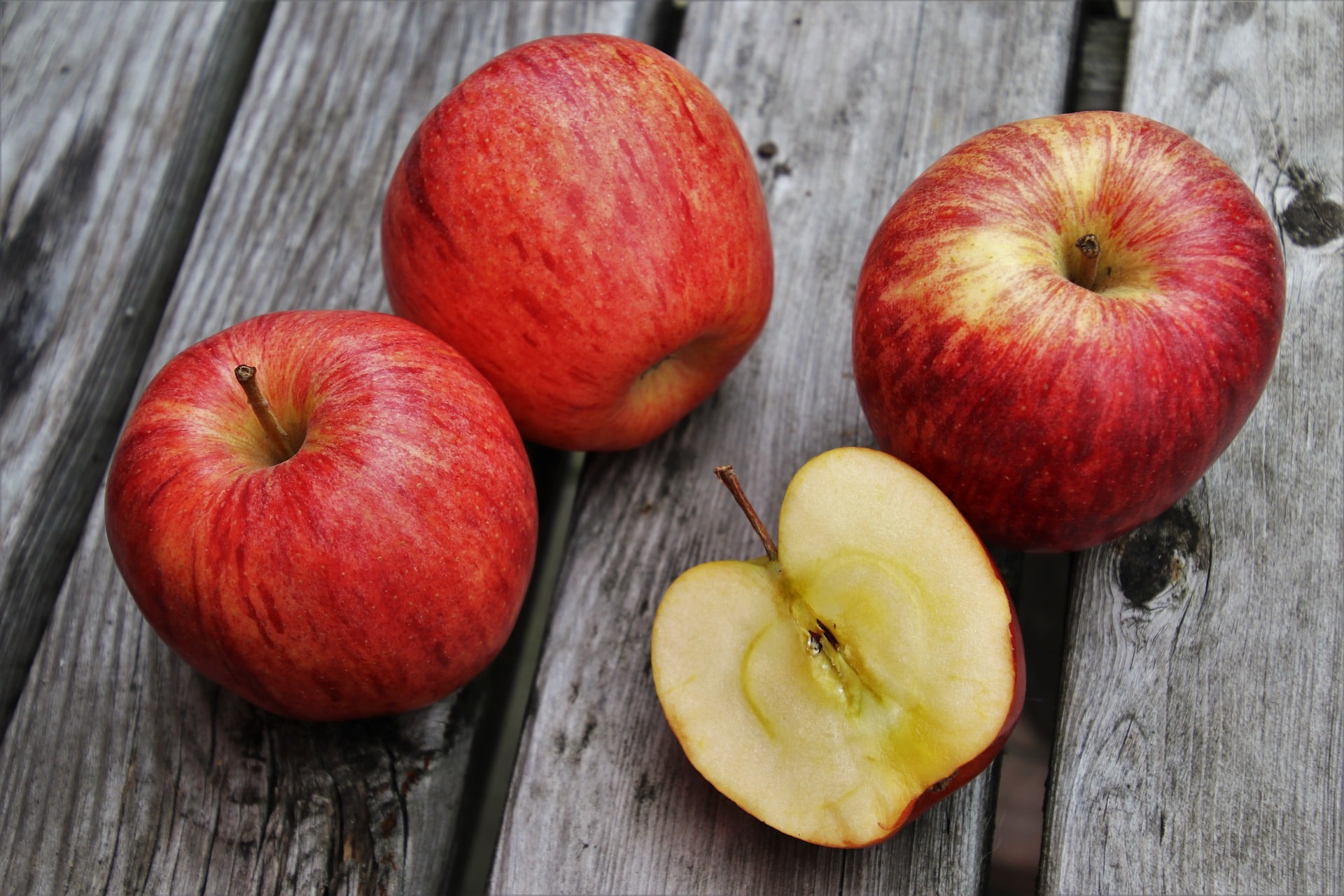 If you’re traveling to a northern state that’s known for apples, stop by an orchard or farm stand and pick up some fresh apples to use in this recipe. But even if you’re heading south for the fall, grocery stores will be brimming with apple choices this time of year. What variety of apples work best with this recipe? Many! Any good baking apple will work great, and some of our favorites include Granny Smith, Honeycrisp, Braeburn, Pink Lady, Fuji and Gala.

So if you’re enjoying the cool weather and sipping on something warm around the campfire, add this recipe to your lineup for a festive fall camping dessert! 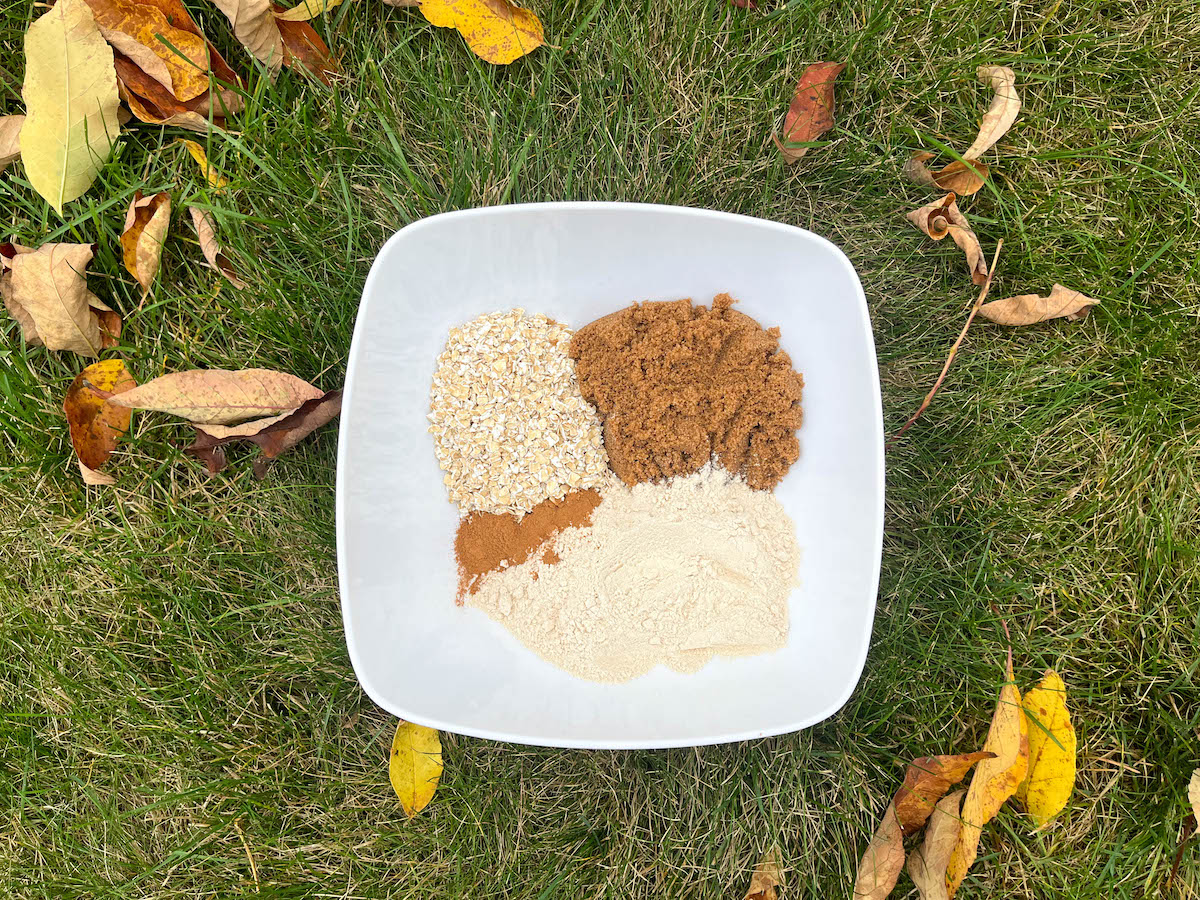 1) To make the oat topping ahead of time, mix all dry crumble ingredients (everything EXCEPT for the butter) in a bowl (above) until well combined. Store mixture in a resealable jar or bag until needed. If you’re making this in one go, jump to the next step! 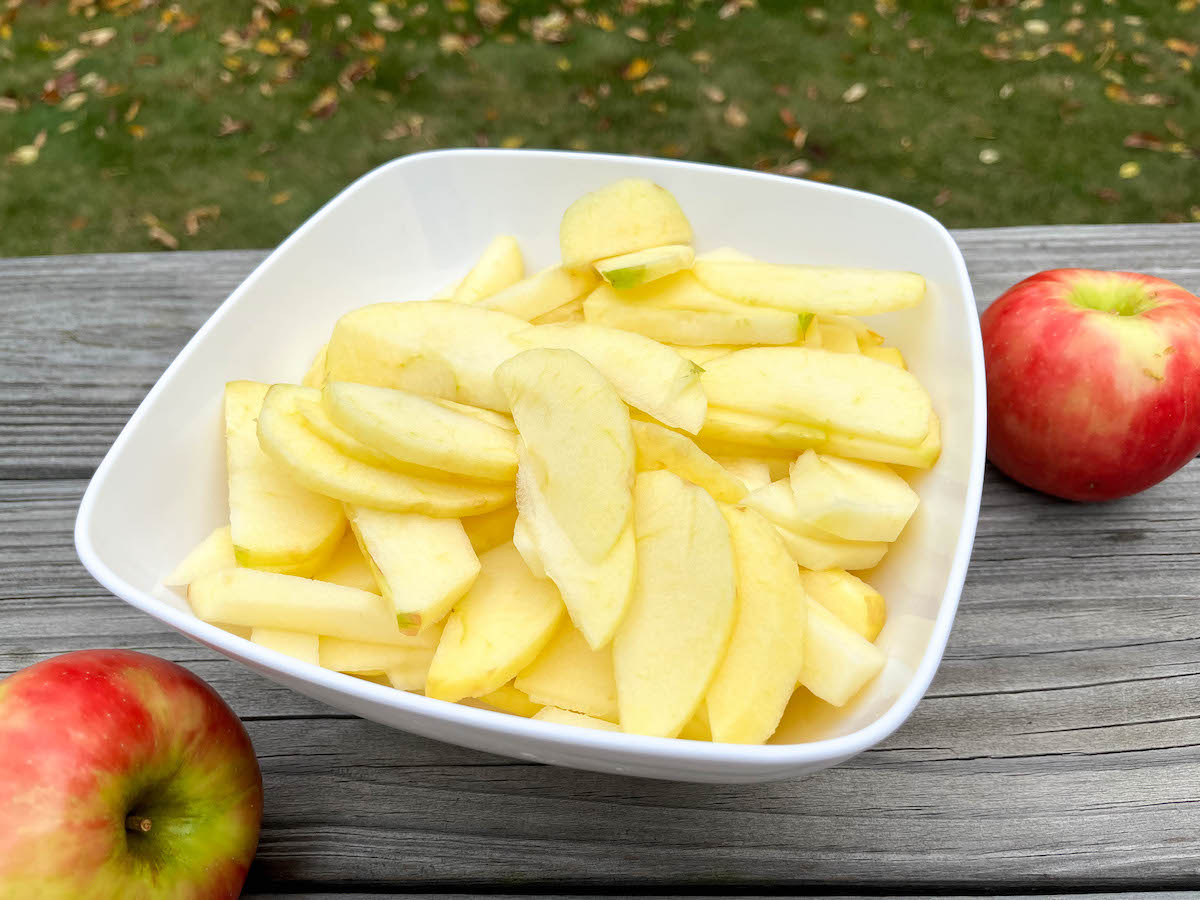 2) Core and slice apples. You can peel the apples if you’d like, but it’s not necessary. Add the apples to a large mixing bowl and add the 1/4 cup of brown sugar and 2 tsp of cinnamon. Mix well until the apples are evenly coated. 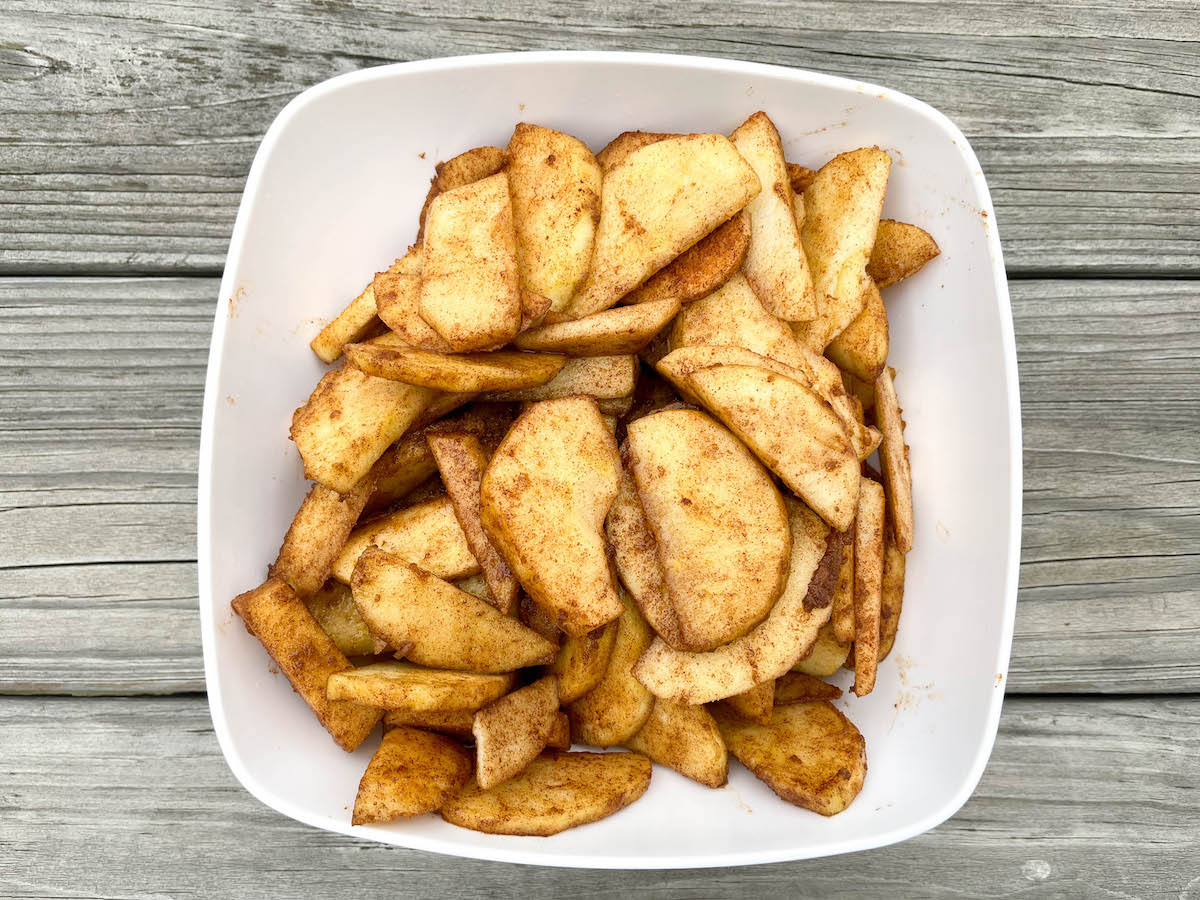 Coat the apples evenly before cooking.

4) Add the crumble dry ingredients to another bowl and mix until well combined. Add the melted butter and stir until the mixture is crumbly. 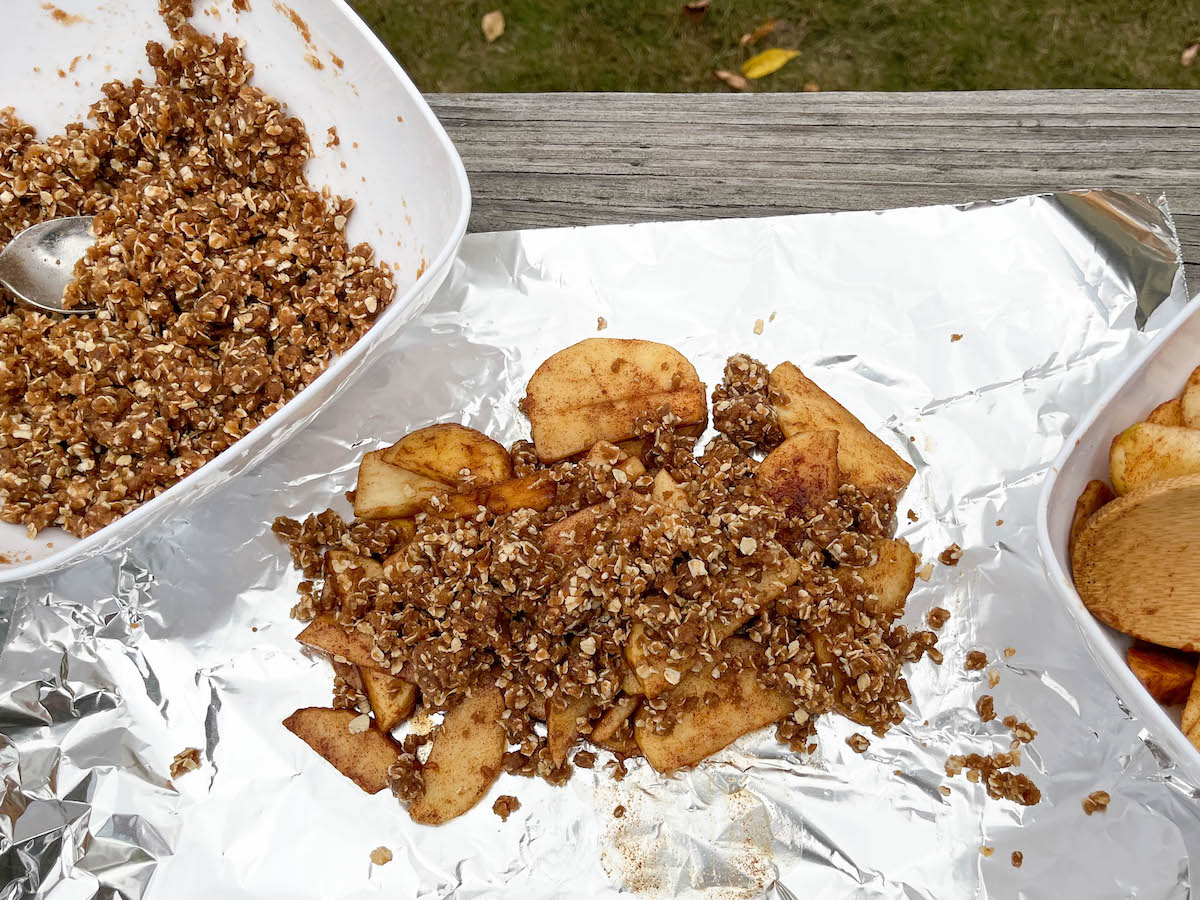 Mixing crumble with the coated apples.

5) Divide the coated apples into 5 packets (each packet will have 2 sheets of foil).

6) Spoon the crumble mixture evenly onto the 5 packets.

On each foil packet, bring the two long sides of the foil together and fold them over a few times. Then fold in the ends to make a sealed packet. Be sure to leave some room inside the packets for the steam to circulate. Double-check to make sure there are no holes in the foil and that the packet is sealed tightly.

To cook on the grill:

Cook the packets over indirect medium heat on a grill for 15-20 minutes until the apples are cooked through. Carefully open the packets and watch for escaping steam. 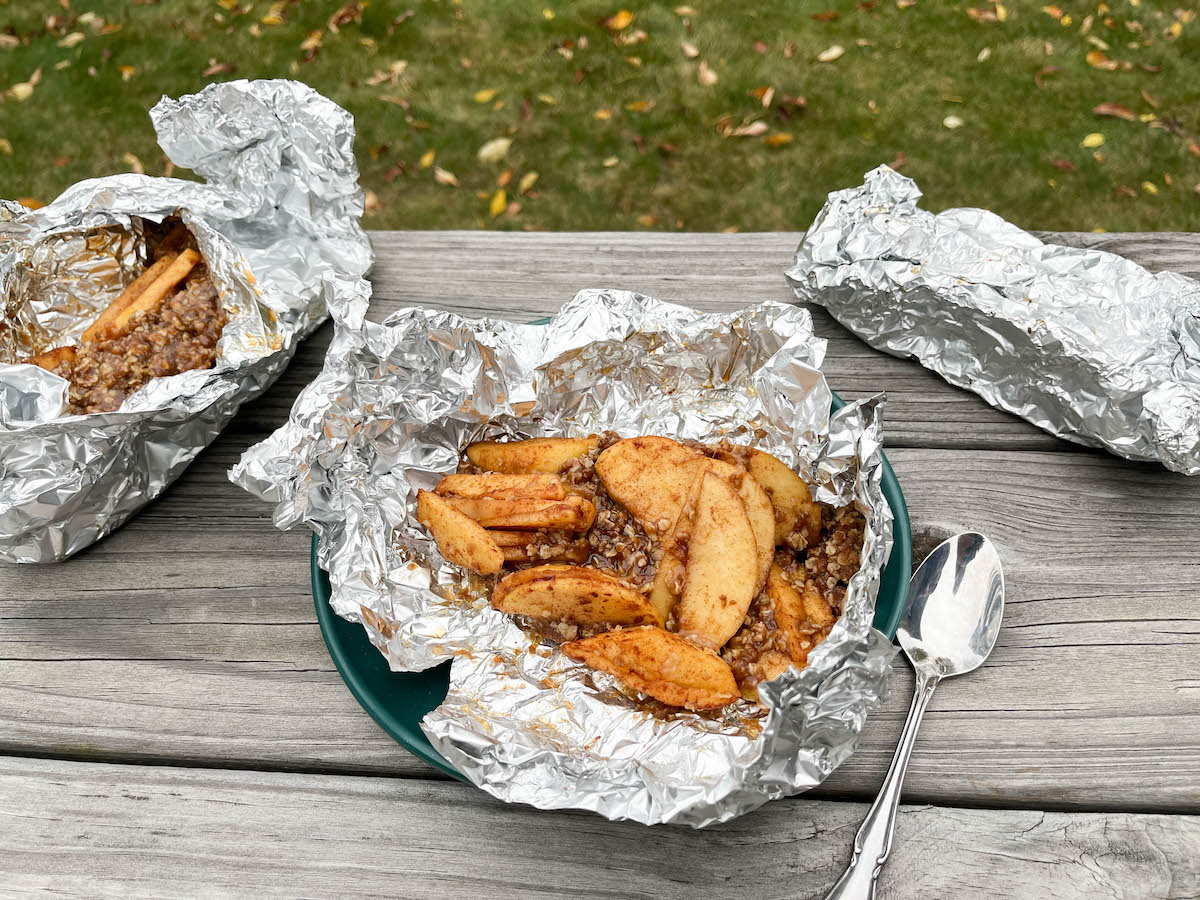 Cooked apples in their foil packets.

To cook over the fire:

Wait until your fire has been burning for a while and has reduced to a nice bed of coals. Put the packets on a cooking grate over the coals and cook for 15 minutes, rotating the packets occasionally. Once the apples are cooked through, carefully remove the packets from the heat. Allow to cool for a few minutes and carefully open.

To cook in the oven:

Preheat oven to 350 degrees. Put the foil packets on a baking sheet and cook for about 20 minutes. Cook until the apples are soft, then remove from the oven. Carefully open the packets and enjoy! 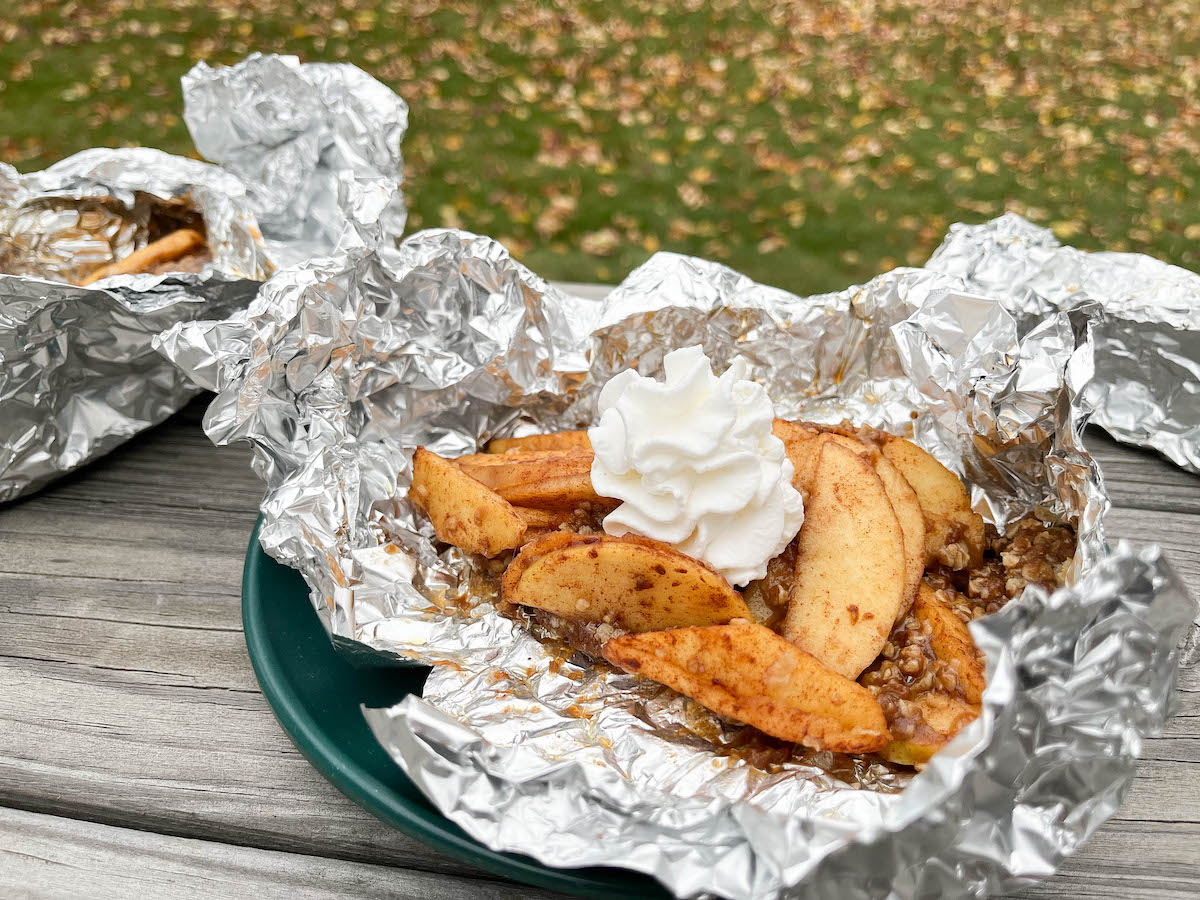 Top with whipped cream, caramel sauce, or ice cream for a tasty dessert or snack. Or skip the toppings; it’s just as good on its own! Refrigerate any leftovers in an airtight container. The leftover crisp will last 3-4 days in the fridge — if you don’t eat it all before then! 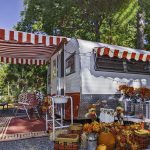 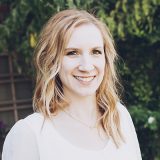 Sarah Cribari is an Arizona-based travel writer who specializes in food, wine and RV writing. She loves hitting the road and looking for the best culinary adventures, local recipes and quirky historical activities to experience and share. She runs the cooking blog The Camper Kitchen, along with her photographer and grillmaster husband, Kacey. There they share easy, healthy(ish) and fun recipes for camping and RV living.