You’ve heard of the snowball effect right? Well, when it comes to Facebook, we have an avalanche. Facebook started in 2005, but it hit a point somewhere in 2008 I think, where the avalanche started consuming even the most casual Internet user.

Because of the way it asks each new user to invite all their friends to join. Millions of old high school friends are now reconnected because of Facebook.

We polled our audience at a recent RV rally seminar we were teaching and were shocked that nearly 80% raised their hands when asked if they use Facebook!

Fourth Largest Country in the World

As of September 2009, Facebook serves 300 million users. If it were a country, it would be the Fourth largest country in the world, behind China, India and the US. I’ll bet it’s even surpassed the US by now. Many people dismiss Facebook as a place where people tell you what they had for lunch today. They’re not interested, and I’d agree if that really was all there was. But, 300 million can’t be ignored.

I have a Florida friend, Chris, who told me that she came home from work and her husband said, ‘Did you know that Kathleen (her daughter who lives in Minneapolis) was sick?’ Uh … no she didn’t. Her husband also happened to mention, “Hey, Suzy broke up with her boyfriend.”

“How do you know these things!?” Chris asked.

If you want to keep up with friends in a quick, non-obtrusive way, you will like Facebook. But, if you run a business, I think Facebook is a must. As I said, those numbers can’t be ignored.

A business presence on Facebook is called a Page or a ‘Fan Page’. It is completely separate from the ‘People’ personal profiles.

My company, Geeks on Tour, has a Fan Page at http://www.facebook.com/geeksontour  .

If you follow these links and you’re logged in to your facebook account, you will see a button to ‘Become a Fan.’ Once you are a fan, any time we post something on the Geeks on Tour page, it will show up on your Facebook home page. It’s a great way to quickly keep up.

Facebook is a whole new world, and I gotta admit, I don’t find it all that intuitive. We are learning our way around just like anyone else. We encourage you to become a fan on our page, and we can figure it all out together!

RVers already know that the Internet is the best way to stay connected.  I know a lot of you have embraced Facebook and are ahead of the crowd.

If you’ve been on Facebook for a while and have any tips to pass along – please leave a comment! 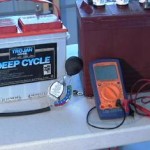 Where is the best place to RV during the winter months and why?