BLUES IN MEMPHIS AND HISTORY IN CHARLESTON 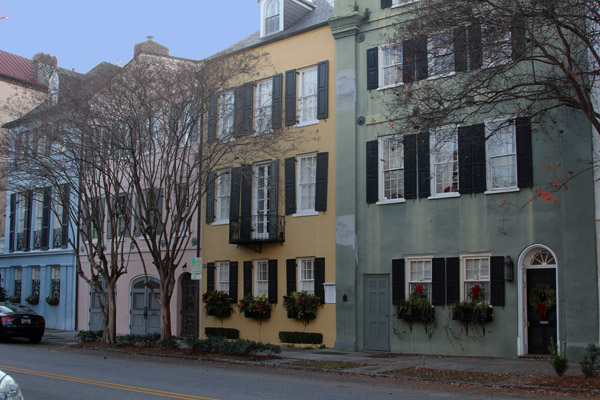 A section of Rainbow Row, a street near the Charleston, South Carolina, waterfront that features colorful facades.

I’m sure the legend of Elvis Presley is the main attraction of Memphis, Tennessee.  That’s why memorabilia about his career seems to be everywhere, especially at the Heartbreak Hotel located down at the end of Lonely Street. 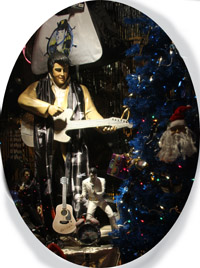 Elvis is in the building ... Make that "All over town"

We parked immediately behind the hotel in Graceland RV Park, an above average park that honors Good Sam memberships.

While we appreciate Elvis’ fine voice and the graceful lyrics of his songs (wait, is “You Ain’t Nuthin’ But a Hound Dog graceful?), we are solidly committed to the blues, especially the old-fashioned Mississippi Delta variety.  And hence, we were eager to hop the shuttle down to Beale Street to revel in the jungle of neon-lit clubs with blaring bands competing for nighttime strollers.

Alas, that didn’t satisfy our taste:  the sounds they were playing were what I call California Blues, a cross between rock, country and blues.  Great for dancing, but why travel 2,200 miles just to listen?   On my last trip to Beale Street, I remember sitting in W.C. Handy Park listening to a couple of creased-face old-timers singing with their low-down scratchy voices.  They weren’t there this trip. 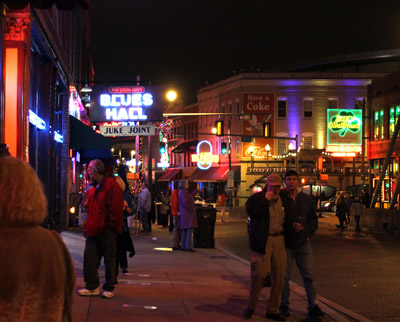 Two Memphis highlights, though.  First, we walked through the historic, luxurious Peabody Hotel, famous for the ducks that greet guests in the lobby.  Then we wandered through the streets until we felt compelled to try out the Flying Fish restaurant.  A good choice!

After that overnight stop, we continued on toward our second destination of this race across America, Charleston, South Carolina.  One overnight parking lot stop and then we set down stabilizers at Charleston Air Force Base (as mentioned in previous blogs, having served 22 years in the military entitles me to park at “FamCamps” on military bases and forts for a reasonable fee).

This is where today’s report gets interesting.   For years Monique has been drawn to novels based on Charleston history, the “Low Country” as the coastal regions are called, the Gullah culture of slaves brought to America to tend the lucrative rice fields, and the role this area played in the American Revolutionary days and the War Between the States.  We had been to the town before, but this time she had a much better understanding of its culture and background all from her reading.

Day One was spent touring the Downtown Historic District in a horse-drawn carriage.  We felt fortunate that the route given us by random drawing was 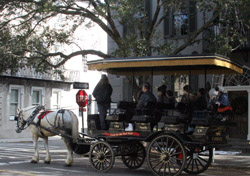 A great way to see and learn about Historic Charleston. This wasn't our carriage, but I couldn't get a good "selfie" from the backseat of ours.

for the exact areas that Monique was most interested in, meaning local mansions dating back 250-300 years, plus Battery Park and stately buildings.  Our buggy driver, Janice, did an excellent job of telling the tales of the city, and John was incredible in finding his way through the narrow streets without too much disruption of traffic (John is the horse that pulled our carriage).

Once we alit from the conveyance and after lunch of she-crab soup for Monique and catfish-and-grits for me, we spent the next three hours walking the streets, visiting with shopkeepers, soaking up even better impressions of the graceful images of the Old South. 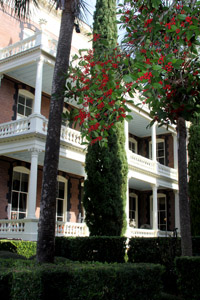 'Privacy Porches" are common throughout the district. It's where the 19th Century residents slept on sultry summer nights.

Although quite exhausted, we weren’t ready to quit yet.  We finally found where we parked our truck, enabling us to make our way to St. John Island to tour the Festival of Lights.  For three miles through the park, we were treated to splendid displays of holiday scenes all lit in bright LEDs.  At the end of the tour, the right lane led to the exit, but we chose the left and reentered for a second go-around to revisit many of the clever scenes we couldn’t digest in one trip through. 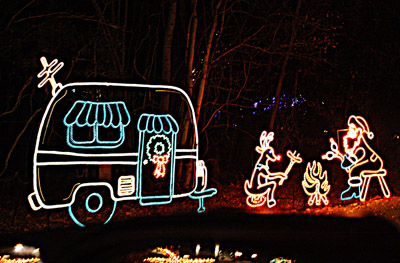 The RV lifestyle was part of the display at the Festival of Lights.

Despite still-aching feet, we left the RV the next day to arrive at 10 a.m. in time for a walking tour of Downtown Charleston, escorted by guide Clara Jane.  You are probably wondering what more we could wring out of this postage stamp-sized part of America.   Monique’s interest was still piqued, and I was glad to be along for the ride … er, for the walk.  And learn we did, gaining a greater appreciation for some of the minutia we had experienced a day earlier.

Charleston, for instance, was one of only three walled cities in the Western Hemisphere, having had a wall constructed to protect the town from the British at Fort Sumter, which you will probably associate with the “shot heard ‘round the world,” the first cannon fired to set off the conflict between the industrial North economy and the agrarian Southern culture. 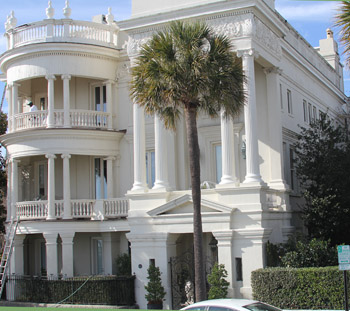 Block after block of impressive mansions from the days when Charleston was the richest city in America. We were pleased to see that, like this home, many of these classic structures are being painted and restored.

There was a lot to learn, but I’ll skip all the important history to relay one “fact(?)” told to us by Clara Jane.  These mansions built in the 18th Century were always subject to fire, so eventually it was decided that kitchens had to be 50 feet away from the main structures with a courtyard in between.  As the story goes, when the masters had a dinner party, the slave waiters had to cross the courtyard with the food, but the pet dogs snapped at them; so the cooks rolled dough into balls and fried them for the servers, who tossed them out yelling “Hush Puppies!” as they hustled to the dining room. 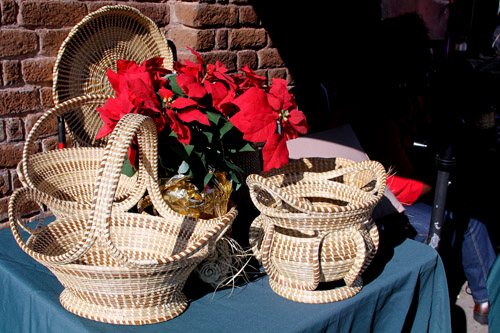 An element of the local culture Monique particularly appreciated was the continuance of the Gullah lifestyle, as represented in these baskets woven by street vendors. Intricate patterns make them very hard to pass up ... until you ask the price -- $25 to $1,200 each.

Eventually the space between house and kitchen was connected with a series of rooms.  That structure is still called “The Hyphen” today.  Lots to learn, as I said.

The day was still young when we crossed a bridge and marshes to Sullivan’s Island, where we walked through Ft. Moultrie, historic in its own right for its role in the American Revolution and the Civil War, and was also on alert looking for U-boats during World War II.

Next, Savannah, Boynton Beach and finally (for 2014) Key West.  Hope to see you there.

FROM PAUL & KAREN — Hope the FedEx planes didn’t keep you up all night in Memphis.  I remember that we stayed at that park for one night, out of a planned seven.  We couldn’t handle the FedEx planes all night long.  In addition the place was like a Children’s Free Amusement Park on the Fourth of July.  Not the place for our current RV lifestyle.  Couldn’t get out fast enough in the morning.

Glad to see you are on the road again, and keep those blogs coming.  So tired of diatribes hawking “my favorite shoe and flashlight” blogs.  Good to see someone writing about an actual road trip again.

REPLY FROM BARRY: I guess we were lucky.  We didn’t hear any planes, or if we did, it didn’t bother us.  Memphis is the worldwide hub for all FedEx packages, so I’m sure that could be a problem.  As for the hawking diatribes, I don’t get it either.  I don’t think that’s why the Good Sam Club established this website, but hopefully some of the other long-time bloggers will contribute travel and RV-specific items again.

FROM ROGER — We also took nearly the same trip at the same time (12-13-14).   Leaving mid-state of California, headed south to find I-40 east.  Interesting to find that all the states to Nashville had some form of road construction. Also stayed in a Walmart or two, and found traffic thru the bigger cities (Nashville, Oklahoma City) was as bad if not worse than commute traffic in The SF Bay Area. For example; I use my GPS consistently and in Nashville I was instructed to take a particular exit to get to our RV Campground. At the critical moment to exit the highway, I was in unable to find the proper exit plus there was a police enforcement stop just prior to the exit. I ended up missing that exit three times and finally got off the Hwy on the fourth attempt. I made it to Florida (DisneyWorld) for Christmas and will go a little farther south after Christmas, then return home.

FROM MIKE — I liked your blog about your quick trip on I-40 to Memphis.  My wife and I will be taking a similar trip in January from SoCal to deliver my daughter’s 2 dogs to her and new husband in Fort Bragg, NC.  My question is in regards to where you stayed.  We plan on driving at a similar pace and would like to know where you guys parked for the nights that you were travelling.  Thanks and Merry Christmas!!

REPLY FROM BARRY: I’ve preached in the past about why private and state parks don’t have short-term rates, like for those of us arriving after 7 p.m. and leaving the next morning before 9.  I think some KOAs got the message, but I haven’t seen any publicity about it.  Until that becomes a regular benefit, we will continue to do the free-overnight stops – Walmarts, truck stops, secure rest-stops, Cracker Barrels, church parking lots, etc., but always using discretion.  For instance, in Boynton Beach, Florida, we were warned by the Walmart manager that a city ordinance prohibits stopping there and it’s enforced, so we moved on … a short distance to a restaurant where we were welcomed to spend the night.  Our casino night cost us only $10 with hookups, for which we showed our appreciation by having dinner at the restaurant.