Saturday afternoon we arrived in Blanding, a dot on the map in the southeast corner of Utah.  Since pulling into the RV park, we have been buffeted by winds up to at least 45 miles per hour, and as I look out our trailer window, I see tumbleweeds shooting down the main street like billiard balls headed for a corner pocket.

We’ve had two branches hit our roof.  Reports from neighbors are that these RV-rocking conditions have been going on for a week and the forecast is for more of the same –– so we have decided to take advantage of the First Law of RVing:  “If you don’t like where you are, move.”

The plan is to skip Canyonlands and turn southward to lower elevations.  Luckily, Canyonlands doesn’t accept reservations, so we won’t lose anything by changing direction.  BUT, before we leave, I thought this would be a good time to tell you our story of “The Old Mormon Road.”  This goes back to our very early experiences in our RV life.

FROM CAPITAL REEF TO BLANDING

For more than four hours we “ooohed” and “aaahed” as we rounded each curve on what has to be some of the most beautiful scenery in America.  Utah Hwys. 12, 14, 24 and 95 across the bottom of Utah meander through Grand Staircase – Escalante National Monument and Capital Reef National Park.  My description and a picture or two cannot do it justice (but I will post a few photos anyway).

After all those miles – and with our fuel gage on “E” — we were more-than-ready to stop for the evening, but we had seen no campgrounds of any sort for at least a hundred miles.  Then came the welcome sight of a small brown campground sign, which indicated a public park.   We turned left onto an asphalt road, following it as it changed to dirt, continued onward curving left and right for a couple of miles, and until we reached the proverbial “fork in the road.”  When no arrows pointed the way, I decided that one road seemed in slightly better condition than the other, so we veered left.  There was no campground, no end to the road and no place to turn around. 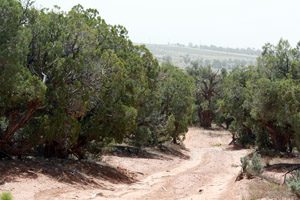 The actually Old Mormon Road seems to have disappeared. This is in the same neighborhood and looks similar without the rocks.

Since that was only the second week of towing a trailer, you would think I was a bit inexperienced at all this – Boy! Is that an understatement! My false confidence told me that I could turn the trailer around by turning into a small logging road, backing up, forward and backward, until I had made a one-eighty.

After a few tries – and, incidentally, Monique was being very supportive of my efforts – I got out of our truck and walked down the logging road, figuring that log trucks had to turn around somewhere.  I tramped along the road, which was about 8 feet wide, with a wall of dirt, shrubs and trees on both sides, eventually finding a small clearing about a half-mile down.

Back in the truck, we ventured forward until I again spotted the clearing.  Drove forward slowly only to realize it was too small to turn 48 feet of truck and trailer around.  The sun was setting over the horizon and we were in the middle of nowhere.  With Monique’s deft coaching I was able to back the trailer into the clearing, but we were too long to make a turn that would set us on course to get out of there.

Monique pointed out that that the only thing that stood in the way of being able to back up far enough was a pine tree limb that jutted dead-center toward the back of the trailer.  By then, my friends, I was a wild beast, enraged by the dire situation.   I looked at the limb – about three inches in diameter – and returned to the cab of the truck, moved forward a foot or two; then, with adrenaline soaring through my entire body, I charged out of the truck, crying out at the limb like a banshee, and willed it to break under my total screaming effort.  It cracked, it bent downward.  Victory!  Well, almost.

I backed up three feet, and then inched forward.  Making the turn back onto the narrow road still presented a problem, and my lack of experience didn’t help.  It was then that I got to test the power of our GMC 2500 Sierra diesel truck with four-wheel drive.  I moved forwarded until I reached the immovable rocks that lined the opposite side of the road.  I shifted into an incredible feature of the truck – four-wheel drive LOW – and churned into and over the two-foot high rocks, creeping ahead until I could straighten out the rig on the road.  Finally on solid footing, I literally wept from the tension of the experience, as Monique gave me my moments of recovery

Then, away we went back toward the highway.  At the fork in the road, we encountered a VW van with a young woman driving.  We stopped her to ask about the campground.  “It’s closed,” she told us.  “I’m going there, but you have to cross a steep ditch to get in.”  A truck and trailer couldn’t do it.  She also mentioned that we were on the “Old Mormon Road,” which isn’t used anymore (obviously), but she was taking a few kids out there for a tent-camping wilderness experience.

And so ended the first real trial of our travels.  A few minutes later, we stopped in Blanding, which gave us more traveling experience (specifically, how to use full hookups), plus a chance to visit the excellent Edge of the Cedars Museum dedicated to the Anasazi Indians, ancient Southwest native tribes that disappeared over a 1,000 years ago.  Quite an adventure for a couple new to the RV way of life, and it led to “The Second Rule of RVing”:  Don’t take dirt roads if you don’t know where they go (unless you’re Bob Difley).

A view of where we were yesterday: 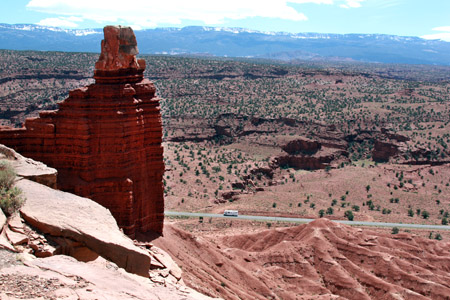 Chimney Rock in Capital Reef (we turned back on our hike a few minutes later when a gust of wind almost blew me off the side of the cliff) © All photos by Barry Zander. All rights reserved 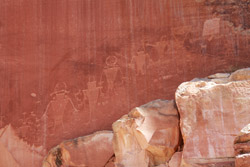 Petroglyphs Along the Road East from Capital Reef 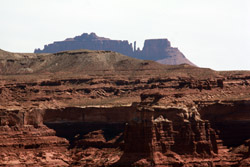 From a Colorado River Viewpoint 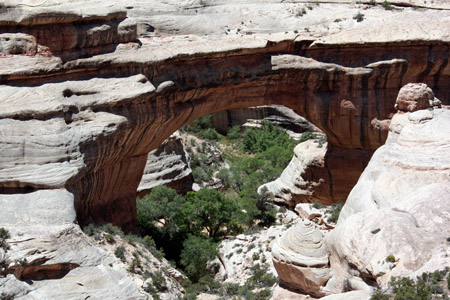 Patti's Saga of an RV Rookie: Important Correction RE:... Previous
Campground Etiquette - A thing of the past? Next