Surf Fishing 101: Your Guide to Angling on the Beach 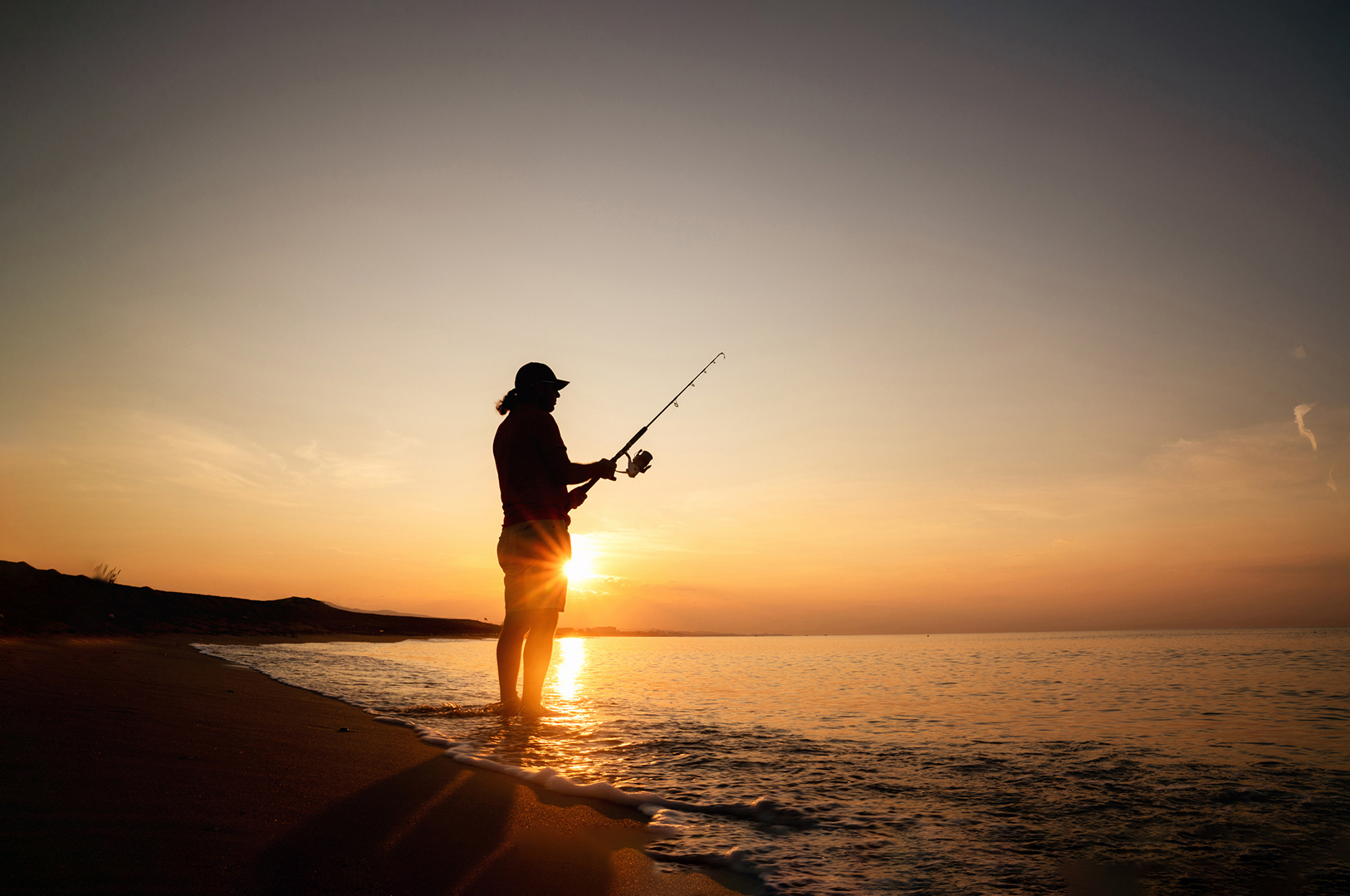 Close your eyes and picture it. You’re lying on the beach with your hat shielding your eyes. In the background, you hear seagulls and the crash of waves slapping off the sand. All of a sudden you get hit with a jolt of adrenaline as you hear the drag on your conventional reel going. An 18-pound striped bass has started pulling on your line. You jump up, grab your rod and prepare yourself for the surf fishing fight of your life.

While this might all sound a little dramatic, surf fishing is an exciting way to wet some lines. The problem is very few people understand how to get started. It seems more difficult than other methods of fishing, and while it’s not necessarily true, there are a few things you need to know.

By the end of this guide, you will be equipped with the knowledge necessary to gather up the right gear and head toward the coast in search of some awesome fishing.

What is Surf Fishing? 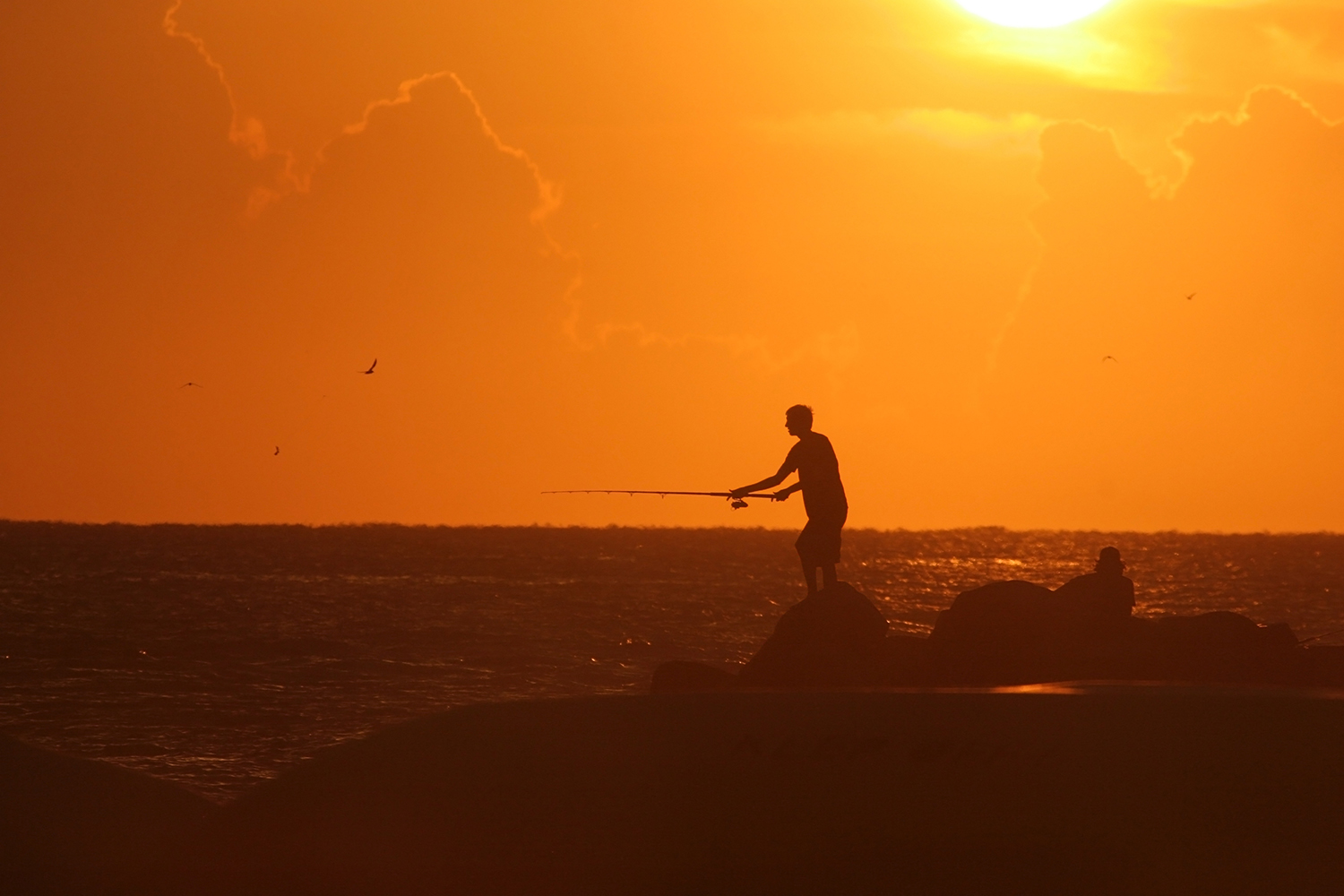 Surf fishing is exactly what it sounds like. It’s fishing along the beach and casting into the surf using a large rod and rig. While it mostly takes place on the sand, you could also surf fishing on a pier or along the rocks.

This is a unique experience for anglers who’ve never done it before. If you’re used to fishing a shoreline or out on a pond in a boat, this is a real treat.

There are a lot of different species you can target. Some include: 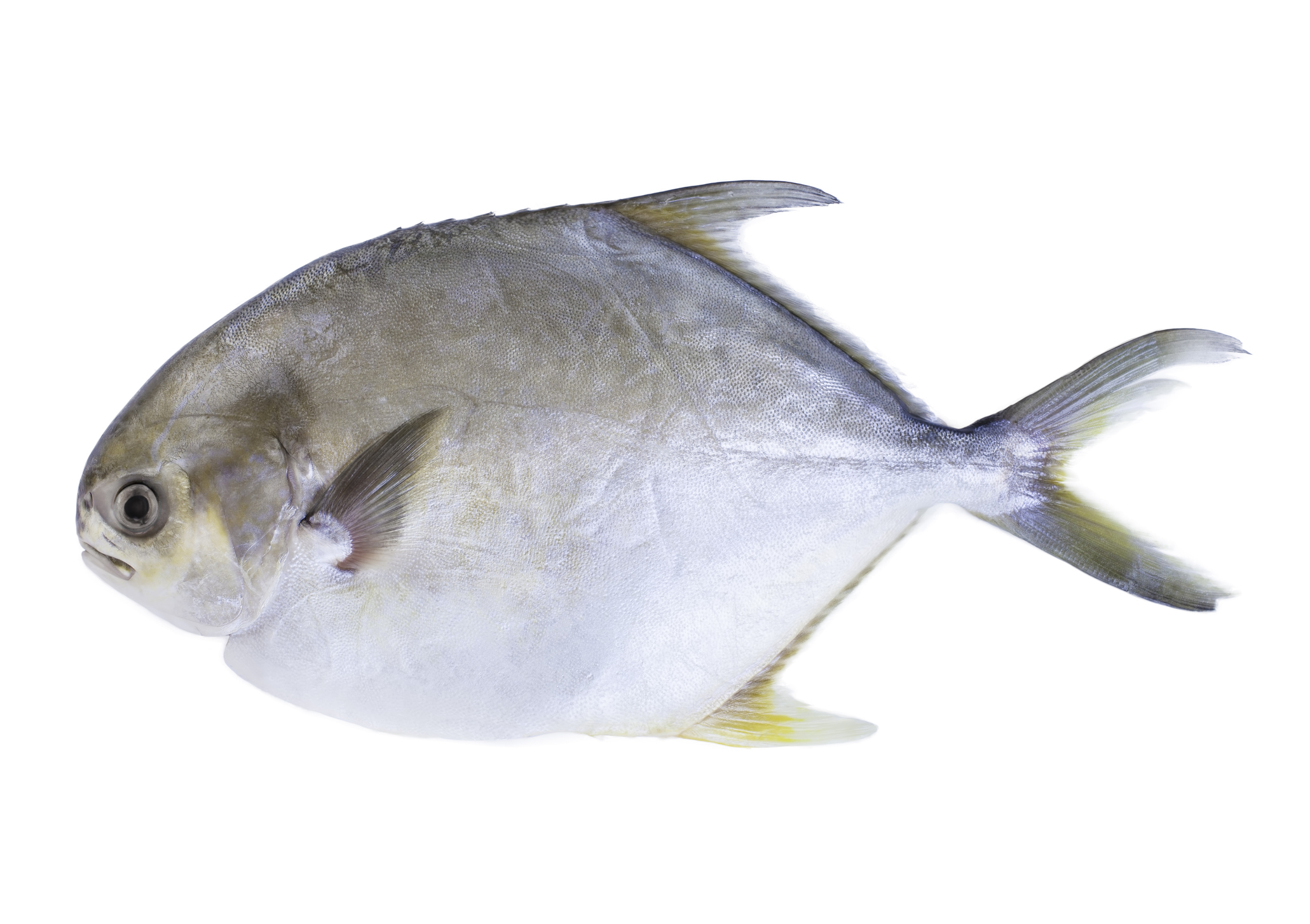 Keep in mind that you can’t expect to simply walk out onto the beach with your typical setup and catch anything. There’s a huge learning curve to surf fishing, even for the most experienced anglers.

The first thing you’ll need to learn is how to cast in the surf. It’s basically like regular casting, but there’s a lot more emphasis on distance because you need to land your bait beyond the crest but still in the surf.

A standard overhand cast will do the trick. This cast involves bending your arm to a 90-degree angle and flicking the pole forward, propelling your bait towards the water. Once you master the basic cast, you can experiment with different things.

If you’re fishing from a pier, you won’t have to worry as much about the cast because you’ll likely be out beyond the crest.

The key to surfcasting is understanding the power required to cast far enough. You can compensate for lack of power by using large pyramid weights (which we’ll talk about). The extra weight on your line will help you get over the close cresting waves and out into the surf.

How to Read the Beach

You’ll hear a lot of experienced surf anglers talk about “reading the beach.” Don’t overthink it. It’s no different than how you would scout out a lake and look for things like structure, vegetation and stumps.

Keep in mind that surf fishing doesn’t always occur on a “beach.” You can fish in some of the best southern states like North Carolina or South Carolina and find plenty of beaches.

But, fishing some Northern states like Maine will result in more rocky terrain. 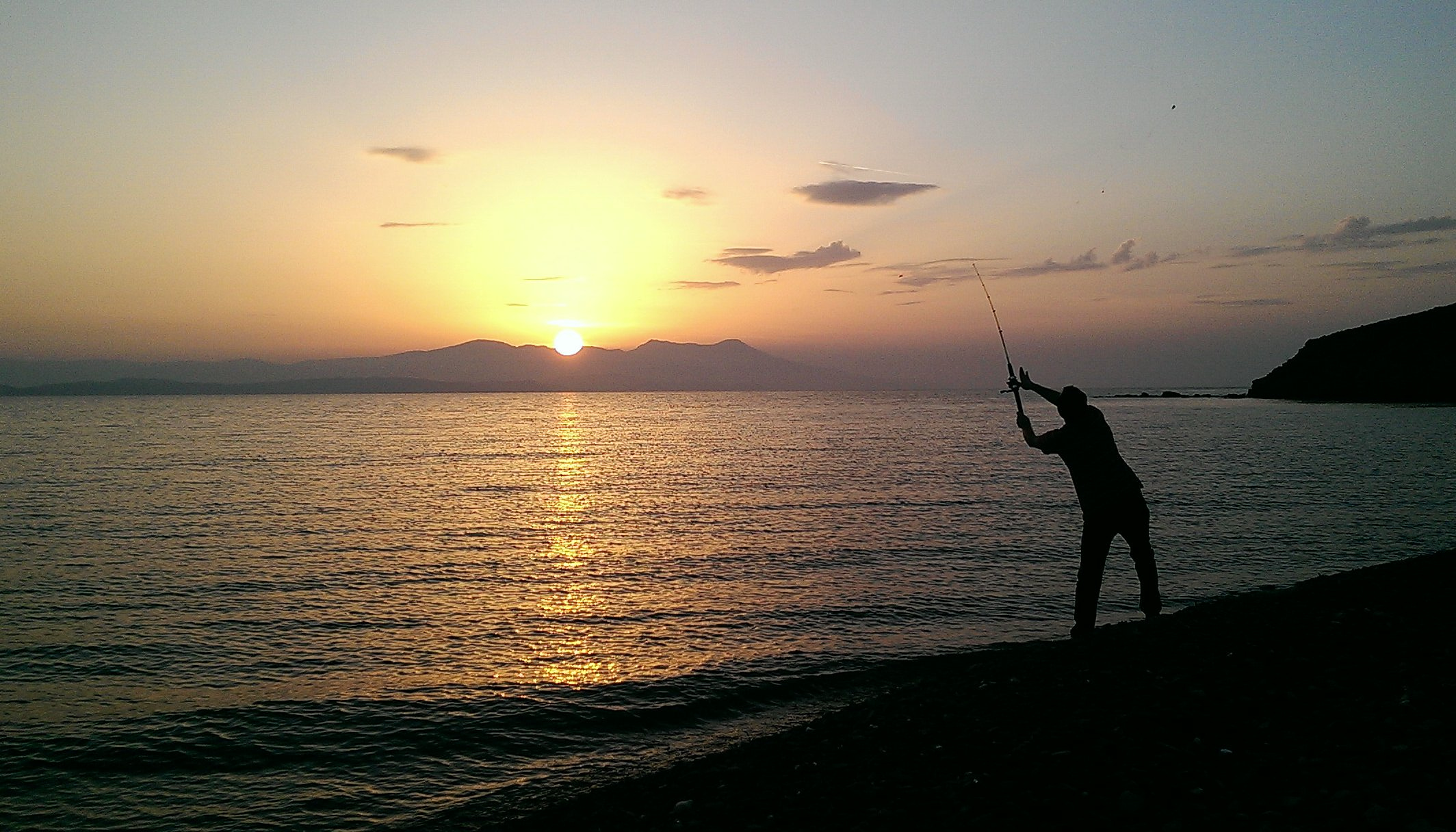 Casting into the ocean. Getty Images

The problem is, when you’re looking out at the vast ocean, there’s nothing to see but water and waves. So, it can be challenging to determine where to cast or where to to fish when everything looks the same.

There are a few things you can look for, though.

Sandbars: If you find a sandbar, you’ll find fish. Fish in all waters enjoy changes in structure and a sandbar is an example of this. Try to cast along the sandbar.

Rip Currents: A rip current is a narrow channel of fast-moving water that generally occurs because of sandbars. The rip current is the area between two sandbars and fish will sit in the area and feed. 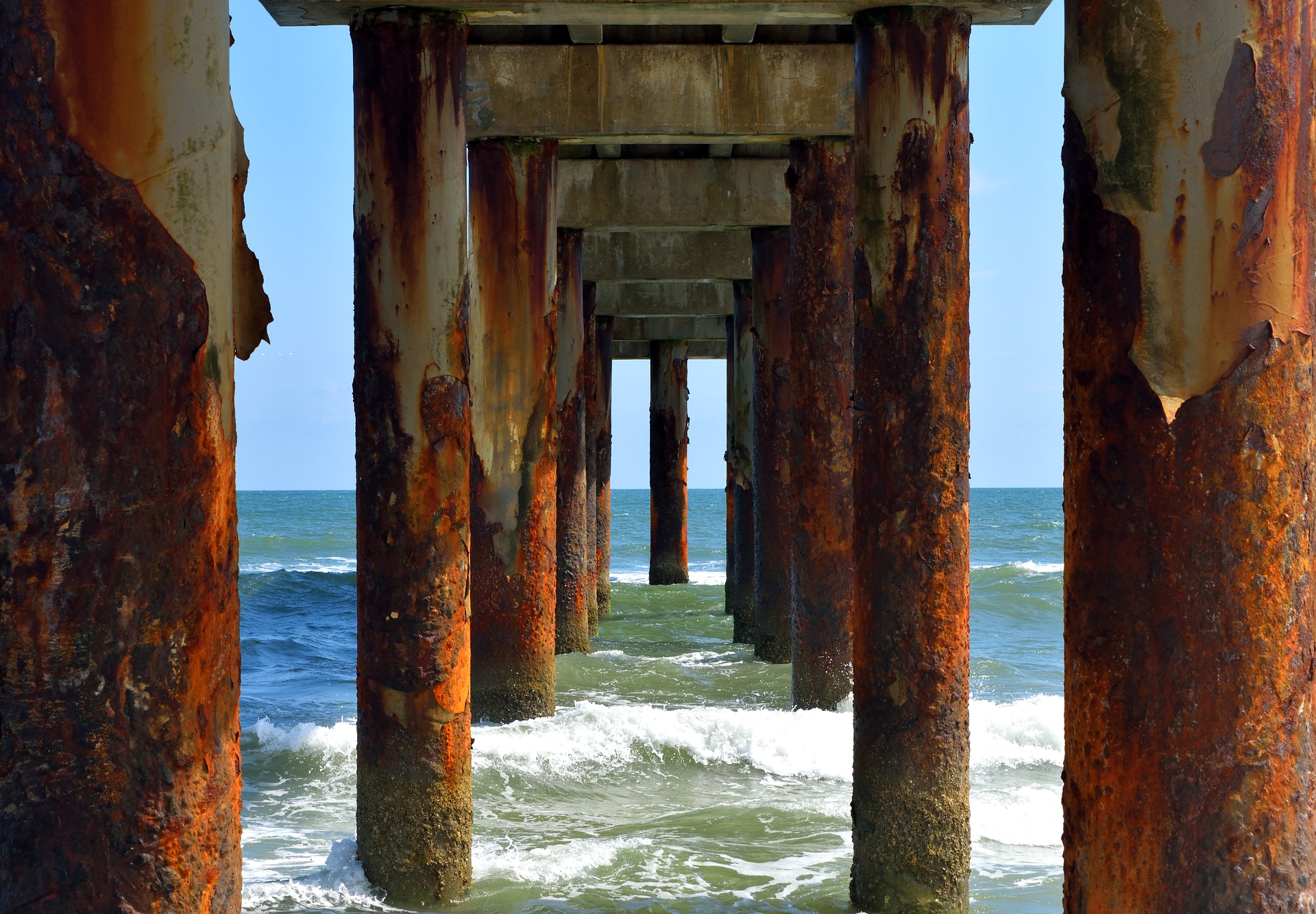 Fish can be found under docks. Getty Images

Piers and Docks: If you can fish from underneath a pier, you’ve likely found yourself a nice spot. Fish will hold to this type of structure for protection from both predators and waves.

As you’re analyzing the beach and looking for ideal places to cast, you’ll want to pay attention to the tides and how the weather affects them. These two factors will play a major role in the behavior of fish as well.

Fishing during overcast weather is ideal because there are fewer shadows. If you can fish during a slight rain, this is the best situation because storms result in low pressure in the atmosphere, which increases the energy of the fish. When the pressure is high leading up to a storm, this is when the fish are most lethargic and less likely to strike your bait. 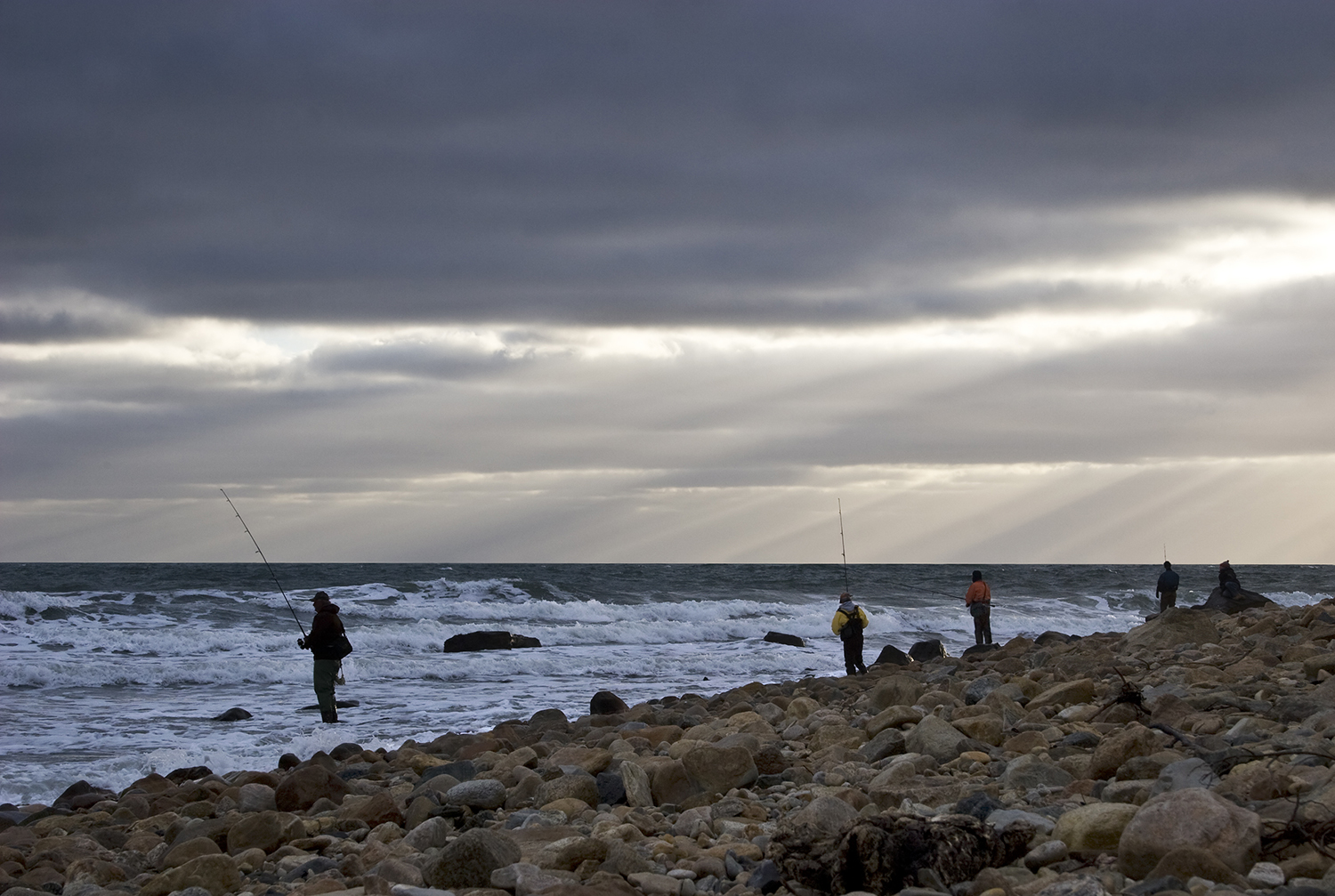 Keep in mind how bad weather can affect the tides as well. Your safety is important, so only fish if you know you’ll be safe. The waves can quickly increase in size, and if you’re caught along the shore with your rod, you can end up getting sucked out.

Speaking of tides, fishing when the tide is high is the best strategy. This is when most of the fish will come into the shallow water to feed. This will vary based on the coast, what fish you’re targeting and your precise geographical location. Your best bet is to stick with fishing along structures and sandbars.

Now that you understand some of the basics of surf fishing, let’s talk about the specific gear you’ll want to have.

You can’t use just any rod when surf fishing because you need something with enough power and length to help you cast out into the surf. A measurement of 8 to 9 feet is generally considered the minimum optimal length for surf fishing. 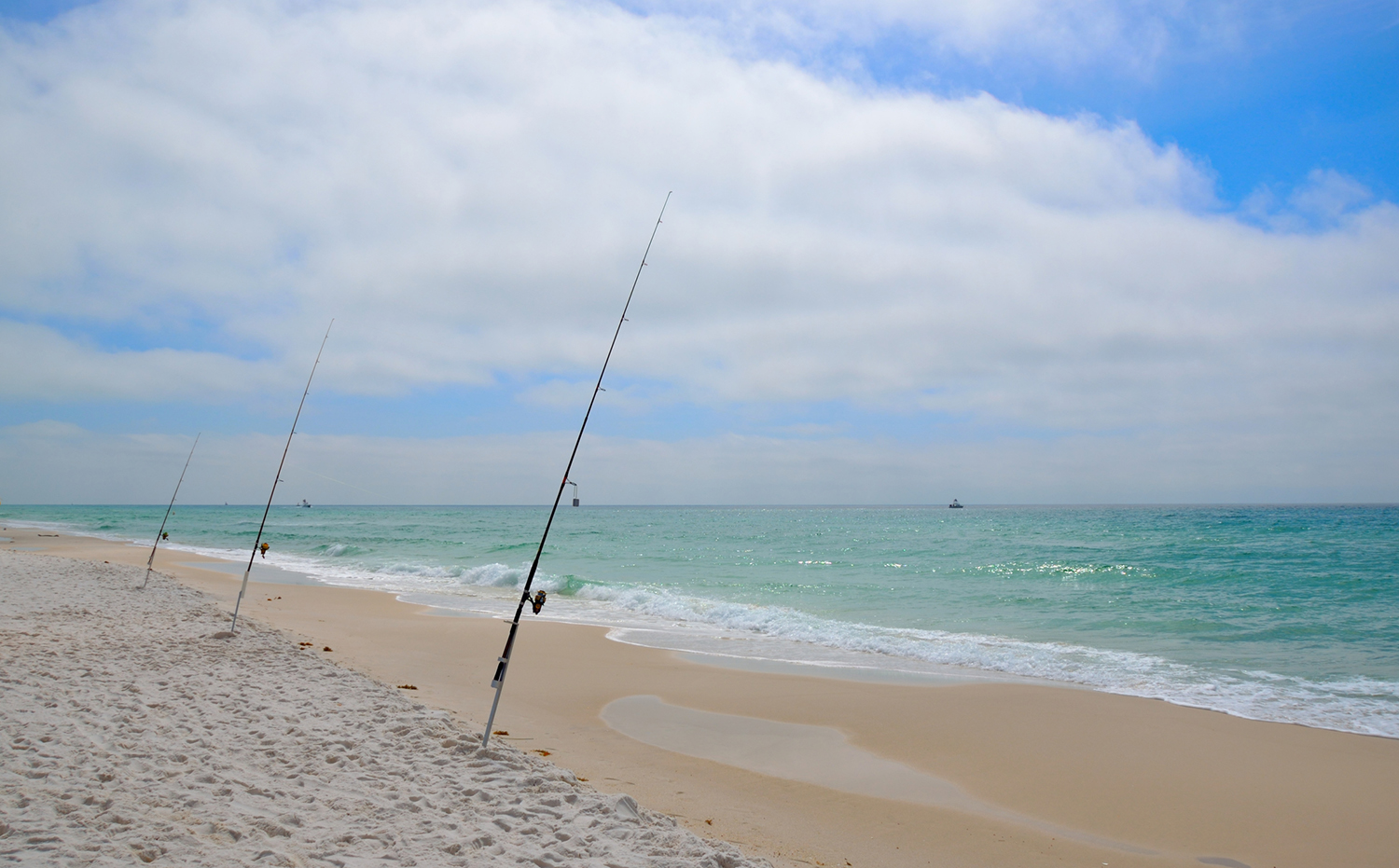 Another reason you use a long rod is that you want to keep your line out of the water. This is why you always see surf rods sitting in the sand at a steep angle. This keeps it out of the surf and also out of the way of people walking or swimming nearby.

You’ll want to use a size 30 or larger reel for surf fishing. You can choose between a conventional or spinning reel, but I believe conventional reels are the way to go.

Make sure the reel you choose is also properly rated for saltwater fishing. The saltwater can damage the bearings and internals if you’re not using something properly sealed and protected against saltwater.

Generally speaking, you want to use a 20- to 40-pound test line when surf fishing. If you’re using a braided line, you can go towards the higher end. If you’re using monofilament, you’ll likely be somewhere around 20 and 25 pounds.

The “pound test” of a line simply refers to how much weight it can take before it snaps. So you’ll need to choose the line you plan to use based on whatever fish you’re targeting. Keep in mind that it’s highly unlikely that you’ll catch anything over 15 pounds from the surf, so these lines should be more than enough.

Fishing on the rocks at Salt Creek, Washington. Getty Images

Live bait is the choice of many surf fishermen because it allows you to fish more passively. You don’t have to create a presentation or move the line around much because the natural elements are doing that for you.

Here are some of the best baits:

Cutbait: Cutbait refers to pretty much anything you can find, cut up and hook onto the end of your line. If you can find a mullet, cut it up into two-inch pieces, and rig it on your hook, you’ve got yourself a likely chance of catching something good.

Shrimp: Sea trout and flounder love shrimp, but almost any species of saltwater fish will eat them. You want to rig these with a pyramid sinker because you won’t get the weight you need to complete a long-distance cast.

Sand Fleas: Pompano and striped bass love sand fleas. They’re easy to get as well by raking the sand. If you can’t find them yourself, most tackle shops along the coast will have them. These are some of the best baits because they’re affordable and easy to get.

If you’ve never been surf fishing before, I recommend you only use one rod the first time. You’ll see people lined up on the beach with four or five rods, but that doesn’t mean you have to do that. As you pick up on it and get better, you can use two rods.

Drag is going to be very important in surf fishing because you need to tighten it enough to ensure the fish doesn’t literally swim away with your line. But you can’t keep it too tight, or it’ll be hard to handle the fish.

One-third of your total pound test is generally considered good for surf fishing. That means if you’re using a 25-pound test line, you’ll want your drag set around 8 to 9 pounds.

3. Use the Right Sinkers

The pyramid, wedge and hatteras are the best sinkers for surf fishing because you need something heavy and a sinker that will hold up against the waves. Anything smooth like a split shot or coin sinker will slide around.

I had mentioned that fishing during high tide is when you have the best chance of catching anything, and that remains true. Early in the day and late in the evening are the best times for surf fishing because there is less activity as well.

Before you ever intend on taking a fishing trip to the beach, you need to scout it out. First of all, you can’t just fish anywhere you want. Some beaches do not allow surf fishing and are not conducive to fishing.

If the beach is overly crowded, it’s not only going to make for an annoying experience, but all the commotion will likely keep the fish from coming near your bait anyway.

You also need to factor in the trek across the sand with all this gear. I recommend bringing a sled or some type of cart you can use to pull everything. It’s a lot easier than trying to carry all your gear by hand if the water is far away from where you park.

Reeling It All In

Surf fishing is a unique and exciting experience that I think every angler should try in their life. Whether you live close to the water or you’re planning a special trip, keep some of the tips and tricks in this guide in mind. Hopefully, they’ll help you land a big one. Good luck out there! 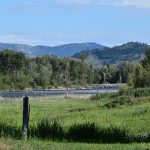 Fun on Land and Water at Riverbend RV Park of Twisp in... Previous
March Regional Travel — Take a Spring Break in the... Next 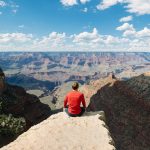