I remember my mother telling me that when I was a child as she tucked me into bed.  I would just laugh ‘cause I thought it was funny.   I passed the goodnight phrase  on down to my children.

I did not know what a bed bug was or if they really existed until earlier this year.

I was watching the evening news on TV,  they had a special on bed bugs being on the rise and how they were being found in even four and five star hotel rooms in New York and other locations.

I thought, “WOW, I guess they are real.  Boy, am I glad I don’t frequent hotel rooms anymore.”  When Nancy and I travel, we take our camper with our bed – not one someone else has slept in.

After watching the TV News Special,  I put any thoughts of bed bugs  in our environment totally out of my mind.

Then this summer we learned quite by accident that some good friends of ours had discovered bed bugs in their bed!  I was surprised– these were some of the cleanest, neatest people on the face of this earth.  Honest!  If you walked in their house you could wipe it down with a white glove and not find a speck of dust.

So, how could these parasites invade John and Marge ‘s (not their real names) home?

We can’t be sure, but John believes it may have happened when he drove to  his sister’s house in another state after his Mom fell and broke her hip (His Mom was staying with his sister).  He had taken his favorite feather pillow with him as he always does.  On the way there and back he spent the night in hotels.  He suspects one of the hotels had bed bugs, and they hitched a ride in his pillow.

At first John thought the small red spots that appeared on his legs and arms were mosquito or chigger bites that he had acquired on their recent camping trip.  But, as it turned out, those itchy little red spots were bites from bed-bugs.

John and Marge have a camper and guess what John always takes with him?  You got it – his favorite feather pillow!  Both their home and their camper were infested before they even knew what had happened.

Bedbugs were once believed to have been eliminated by pesticides like DDT back in the early days.  But with the current laws against DDT and similar pesticides bed bugs have made a strong comeback.  Only this time they are resistant to most all of our commonly used pesticides and thriving in what we might consider a toxic environment.

So, how did John and Marge determine for sure they had bed bugs?

They placed some strips of sticky duct tape at the head of their bed with the sticky side up and turned out the lights. A few hours later they found bed bugs trapped on the tape.  They then tried the same procedure on their furniture and in the camper. The furniture came out OK, but the camper bed did not.

How do you get rid of these pesky critters?

Bed bug bites appear as tiny red spots. Some people are allergic to the bites. They can itch and become infected from scratching.

John and Marge had planned on getting a new set of bedding for the house anyway.  So they took the old mattress and box springs out and hauled them to the dump.

They bought one of those steam cleaning machines you often see advertised on TV infomercials at a local home store.   After completely vacuuming their bedroom – even behind and inside the picture frames and electrical outlet cover plates – they went back over everything that moisture would not harm with a hot steam vapor blast.  Heat kills bed bugs.   Marge washed all the sheets, blankets, and curtains in hot water.  She sent the quilt out to a dry cleaner and had a commercial carpet cleaner come in and steam clean all the carpets.  Just for good measure, she ironed everything after washing and drying.

John’s favorite feather pillow was also washed in hot water and then tossed in the hot dryer.  Amazingly, it was not ruined.

The mattress in the camper was almost new,  so John steamed all the seams and folds where bugs or eggs could hide, then put it into a homemade plastic bag fashioned from a roll of  black  plastic sealed with duct tape to make it air tight.   He tossed in some moth crystals for good measure and placed it in the hot sun for about a week.  When he took it out of the bag it had a moth crystal odor, but another day in the sun and a bottle of Fabreze©  made it smell like new.

The inside of the camper received the same careful vacuuming and steam cleaning.  Then they shut the door and windows and let it bake in the hot summer sun for a week.  Inside the temperature rose to 140 degrees – plenty hot to kill bed bugs.

They think they are rid of the creatures but  realize that any eggs left behind can hatch at a later date.   Just to be sure they will know if any bugs come back, they keep a strip of tape – sticky side up – near the bed in both the camper and house and check it daily for signs of bed bugs.

John is no longer allowed to take his favorite feather pillow with him when he travels overnight away from home. 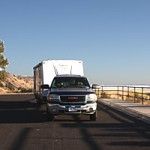 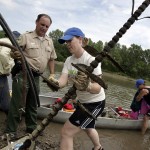