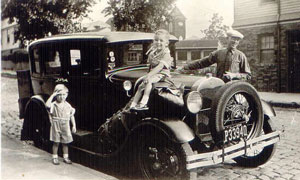 The Good Sam Club and RV industry are celebrating 100 years of RVs with stories of early ones. I have been camping for 79 years since I was one year old in 1931, and found some pictures of my family’s first “motor home”. It was a modified Ford sedan with a tent that attached to the side of the car. My Dad built a cabinet that attached to the back of the car to contain cooking equipment, food, clothing, etc. A cot set up inside the car over the seat backs provided a place for my brother and I to sleep. My parents slept on a folding bed in the tent.

For traveling the tent and beds were rolled up and secured to the fender. Boxes on the running board (for young readers, the step to get into the car) contained camping equipment. One picture shows our “motor home” with four year old me on the hood next to our home in Paterson, NJ, in 1934. The other photo shows the cabinet on the back of the car and the tent attached for camping. Very primitive by today’s standards, but it took us many places.

My Dad was a printer. During the great depression the printing business was very slow in the summer, so his boss provided extended unpaid vacations, which we used for traveling. We camped mostly in national, state, or city parks, but sometimes farmer’s fields. My mother’s list shows that by 1938 we had been in 39 states and 5 provinces. The Ford and tent served as our home away from home until my Dad built a travel trailer in 1937, but that is another story.

Submitted by William Vanderkooi of Midland, Mich as part of the RV Centennial Celebration” Share Your Favorite RV Memory” contest. 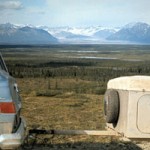 An Expected Summer Adventure Previous
Alaska to Guatemala 1962 Next 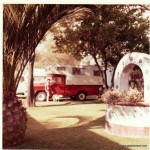