You can save over 60% this weekend on Woodall’s special 75th edition of the North American Campground Directory. Get a copy at the unbelievably low, low price of just $10 (plus shipping and handling). Sale begins today and runs through midnight, February 21,  so don’t miss this presidential opportunity to save BIG and start planning your next RVing adventure. Buy Your Copy Here!

And in the spirit of President’s Day, here are some sites you can plan your vacation around, using Woodall’s Campground Directory

Named one of the Top 10 Construction achievements of the 20th Century, Hoover Dam continues to draw crowds more than 70 years after its creation.  In 1930, construction began on the Hoover Dam, the largest of its kind at the time. Despite the remote location and harsh working conditions, it was completed in less than five years — two years ahead of schedule — and well under budget (how often does that happen!). The dam is named after America’s 31st president, Herbert Hoover, who played a large role in bringing the nearby states into agreement about water allocations, settling a 25-year controversy. The dam has been called Boulder Canyon Dam as well as Boulder Dam, but Hoover Dam was reinstated as the official name by Congress in 1947.

Theodore Roosevelt’s experiences in the North Dakota badlands shaped his adult life, helping him become the Rough Rider, the President, and the world’s leading land conservationist. Walk in his footsteps and explore the rugged badlands terrain, watch wildlife, relax in the shade of a cottonwood tree, and enjoy the lifestyle and scenes that charmed TR.

Mount Rushmore has become the iconic symbol of our nation’s history and pioneering spirit. If you have never seen Rushmore personally, jump in the rig right now and experience it for yourself.  It is truly awe-inspiring.  Mount Rushmore bears the busts of four U.S. Presidents–Washington, Jefferson, Lincoln, and Roosevelt.  Washington’s face is 60feet long, Jefferson’s mouth, 18feet wide, Roosevelt’s mustache is 20feet across and the eyes of the four men are 11feet wide each! The first actual work of sculpting Mt. Rushmore began on October 4, 1927 and continued for 14 long years.

Washington, DC is a city of monuments and memorials, honoring  generals, politicians, poets and statesmen who helped shape our great nation. Although the most famous monuments and memorials are on the National Mall, you will find statues and plaques on many street corners around the city. Many of the monuments are open late at night and their illumination makes nighttime a memorable time to visit them.

Patti’s Saga of an RV Rookie: “Ode to a Salesrep:... Previous
Electrical Vehicle Update - Space pod look-alike with... Next 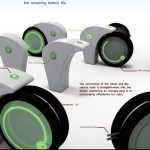