“I’m wiping reindeer hair off my shoes,” Marvin Curb told me yesterday when I asked what he was doing at the door to his motorhome.  Now there’s something you don’t hear everyday, but in Alaska, well, a lot of unusual things happen.

On the serious side, one of the caravan members went to an Anchorage urgent care provider when a she was stung by an insect.  She was refused treatment there and at a second clinic, because they don’t take Medicare or accept secondary health insurance.  I hope we hear more about this from others who have asked for medical care in the 49th state.

To be honest, this edition of Our Alaska Trip journal is stalling for time.  I have three items that I want to put together, but the photos that go with one story were fried in a laptop, so we’re trying to resurrect them, and a member of the group that I want to talk with hasn’t been available to tell his story.

So now for some random notes and just a tad of travel log:

RVers who travel to Alaska with their dogs and who plan to embark on a 12-hour tour, as we have, need to plan ahead for pet care while they are gone.  We’ve had a dog-walking service available at one private campground and I’m sure others offer it, also.

I mentioned before there are something like 2.5 gift shops per tourist in Alaska.  Still true. 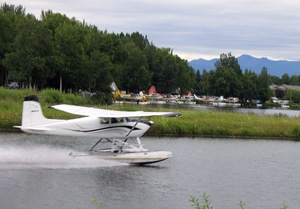 license.  Our tour yesterday stopped along a lake that is the busiest seaplane airport in the world, with an average of 250 take-offs a day, according to our bus driver.  It goes up to 800-1,000 a day on occasion – I don’t recall Anchorage ever hosting the Superbowl.

In addition to the seaplanes parked on the lake, there’s a parking lot filled with seaplanes on the tarmac or on trailers.  Since these little aircraft can’t make it to the Lower 48, I asked where they all go.  In addition to hunting, fishing and sightseeing, lots of them make trips to the Interior to deliver supplies.

And that segues into the life of our whitewater rafting guide, Tim.  Tim shares an apartment with others and apparently survives on Chef Boyardee 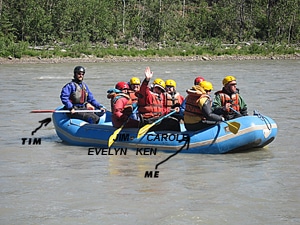 from the can.  Not only are food prices steep in Denali, but it’s over a hundred miles to the nearest supermarkets in Anchorage or Fairbanks.  They make the drive once or twice a month.

And that brings us to today’s outing.  We started the day at Costco for lunch and stopped at Walgreen’s on our way to the Alaskan Native Heritage Center.   Our knowledge of native life among the many clans (tribes) of Alaska was broadened greatly.  I found out that the Aleutian Island chain is “the birthplace of the winds.”  Winds there often top 100 miles per hour and get up to 200 miles per hour.  I suspect it’s not a good place for a high profile RV, even if there were roads there.

From Left, Natives' Relationship to the Sea Otter, Warrior Games and Crafting a Totem Pole

Thanks to Ada Beavers for the rafting photo.  Good thing she didn’t get a shot of me in the 38-degree river — Monique would panic.