Japanese car company Nissan seems to be leading the pack of car companies to market with their 4-door hatchback Leaf electric vehicle (EV). Not only will Nissan be one of the first to introduce an all electric car to the American market, which will hit dealer showrooms by the end of this year, but last week they stunned the electric vehicle market with the announcement that they will also be installing inexpensive fast charge stations–which they are now installing in Japan–as soon as they get UL approval.

Fast chargers, installed at charging stations–the electric vehicle’s equivalent to a gas station–will charge an electric vehicle battery pack to 80% capacity in about 30 minutes. When first designed, these chargers were estimated to cost from $60 – 100,000, but Nissan’s breakthrough charger will cost just $17,000. At such a price charging stations could become common at restaurants, rest stops, parking lots, tourist attractions, shopping malls, campgrounds, and even gas stations, making re-filling your EV toad’s batteries as easy as filling with petrol and reducing driver anxiety over the Leaf’s shorter 100 mile range compared to a car using a gasoline or diesel engine.

The regenerative braking system, which recharges the battery pack while braking, helps the Leaf to the 100 mile range figure, though on the highway, with little braking compared to city driving, the range could drop to half that. Fast charging the battery pack two or three times a day could also degrade the battery reducing it’s life by 10% Nissan officials state. The cost to power up the discharged batteries will cost about $3 at home or at power stations.

Could this speed the possibility of using pollution free EVs like the Leaf as toads for RVers? Maybe sooner than previously predicted, especially if federal and state incentives to buy fuel efficient vehicles are in effect, as they are now, which bring the EVs closer in price to comparable gasoline vehicles. And with eliminating the need for gasoline and with the lower maintenance of electric motors compared to gasoline or diesel engines, the Leaf might kick-start broader interest in EVs.

111Ways to get the Biggest Bang for Your RV Lifestyle Buck

What I Learned from Our Backyard Tent Camping Test Run... Previous
Get a Safer & More Stable Ride With an Air Suspension... Next 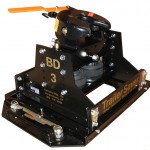