HD (High Definition) TV is taking over the market.  Broadcast networks are all switching or rapidly making the transition to this newer technology.   The difference in picture quality is quickly recognized when both SD (Standard Definition) and HD are compared.  All the new TV’s, DVD and satellite receivers are being built to deliver this format, including video game hardware like the Sony Play Station.

But, there is one thing they seem to have in common.  You must have special HD wiring between the source and the television.  Composite and component cables are quickly being replaced with HDMI input.  The Sony Play Station, for example, will only display a 480 resolution unless an HDMI cable is used.  Soon, it is thought, all receivers may have to have at least HDMI output to function at its maximum with the newer technology.  This has a special impact on RV owners as replacing a cable run is usually a challenge on most trailers and motor homes.  Usually the wiring was installed during the manufacturing of the unit and is not easily accessible.

Okay, so to run the high definition signal from the receiver to the TV requires special wiring capable of handling the wider band to accommodate this extra information.  This HDMI output/input cable is at least three steps up from the coaxial cable that we once used for basic cable and off-air antennas.  I guess the coax is a thing of the past, or is it?  Is coaxial cable capable of handling this newer technology?   Well, I believe it is.

Most TV viewers have never seen off-air broadcasts for years, and probably won’t for years to come, if ever.  Mobile travelers, such as RVers, however, are often exposed to the need. This need is driven by wanting local programming at their current location or the fact that no other service is available due to the geographical terrain or lack of cable hook-up.  An additional challenge faces any RVer that has a non-upgraded TV in a vehicle prior to ‘06/’07.  The TV sets supplied prior to then were not equipped to receive and convert the now mandatory digital service found today in off-air broadcasts throughout the U.S.  While these sets can be upgraded, or patched, using an analogue/digital converter, they may not perform to the level herein described.

If you have not experienced the new off-air digital HD broadcast, you have a pleasant surprise awaiting you.  The picture quality, 720/1080 HD, is equal to any HD programming out there, including DVD or satellite HD.  The comparison I made was with Wink TV in Fort Myers, Florida.  It was remarkable, and definitely equal, or slightly better than the best HD television available today, all through an RG-6 coaxial cable.

So, what’s up with the expensive HDMI, composite or component cables?  If off-air transmissions can provide this type of picture quality through an RF coax cable, why can’t the consumer electronic market do it too?

Is this a marketing ploy to promote the sale of expensive accessories to consumers?  It might certainly seem like it.  Not only do they want to sell you these so called miracle cables, but they also claim you should buy the higher priced ones as they work superior than the lower line products.  This may spell consumer product rip-off.

When people really get to see what off-air can supply through a coax cable, things may change.  However, I’m betting the consumer electronic marketing folks will put a lid on it by designing a filter for those off-air broadcasters and get them on their side.  This would require some kind of digital converter which would require, you guessed it, special expensive cables.  Additionally they would further profit by a monthly converter rental revenue.  This all spells a continued consumer rip-off. 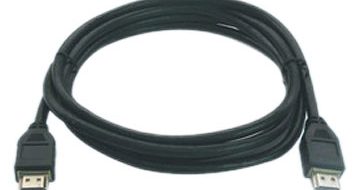 Need an HDMI Cable? Don't Get Ripped Off!