Hope After the Fire: Hiking Through SoCal’s Burn Zone

In the wake of the Woolsey Fire, a hiker shares his outlook on environmental recovery

A ridge that was ravaged by fire is now ablaze with poppies. Image: George Sherman. Inset: Skeeze 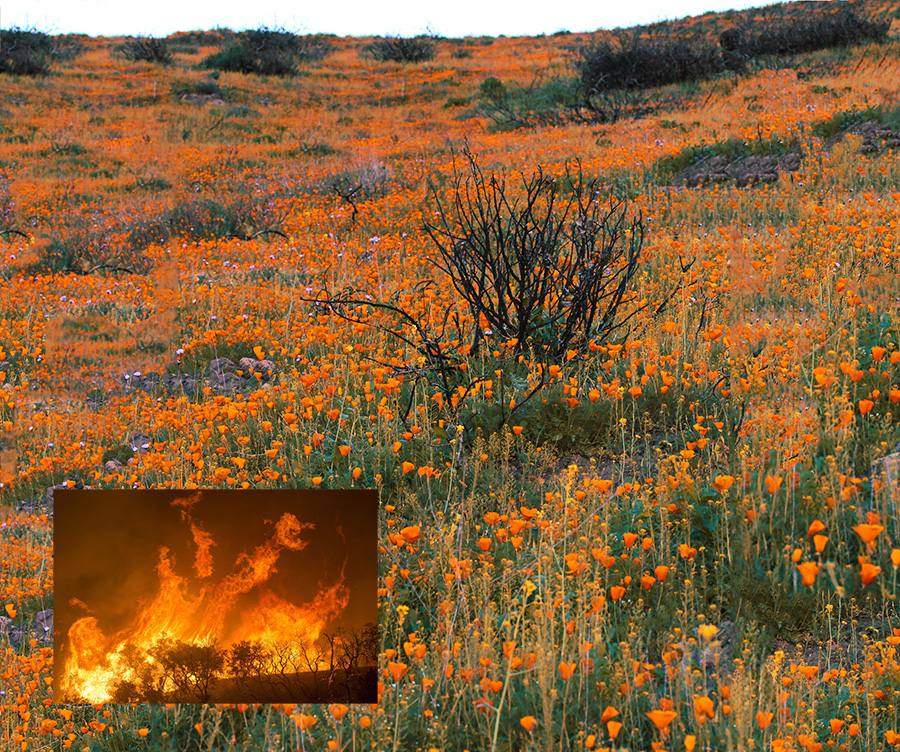 During an unseasonably hot and windy December in 2018, the sweeping Woolsey Fire burned fast as it roared from one side of Southern California’s Santa Monica Mountains to the other. More than 1,643 structures fell to the flames and almost 100,000 acres of land lay scorched, leaving huge swathes of blackened landscape.

As a local hiker, I wondered how our mountains’ environment would bounce back. I’ve walked hundreds of miles over the years on the trails that snake through the mountains between the beaches of Malibu and the suburbs of Thousand Oaks, which constitute much of the burn zone. I’d become familiar with the hardy and fragile plant life that once flourished in the region. What kinds of plants grow out of the damaged ground amid charred trees and shrubs?

If the past is a guide for the future, the race among plants is well under way to fully reclaim the scorched earth. Landscapes previously covered with nearly impenetrable chaparral are now a blank canvas. This means that plant diversity is more pronounced, as seeds of the previous season and seeds long dormant burst out of the ground.

But this initial wave of new growth fades after a season or two. Seeds from these early “fire follower” flowers will comprise the newly replenished seed bank—ready and waiting for the next fire. Competition with these fast-growing plants will come from the slower growing shrubs that eventually form the next generation of impenetrable chaparral.

Sprouting After the Flames

Even immediately after the fire, my fellow hikers and I observed that the landscape was not entirely a moonscape. Flames had reduced huge areas to ash, and yet a few yards away flowers remained in bloom. Fire is capricious — an incinerated forest of oak trees here and slightly burned chaparral over there. Differences in fire intensity created a unique mosaic.

The first signs of recovery were immediate: Yuccas and laurel sumac poked out from the ash-covered ground. Wild cucumber’s white blossoms appeared with the first rains. Now, approximately three months after the fire, it has become clear that a recovery is in process. After the onset of the rainy season, the hillsides are green with fast-growing, non-native grasses and mustard. Fire is but a speed bump to these invasive plants. 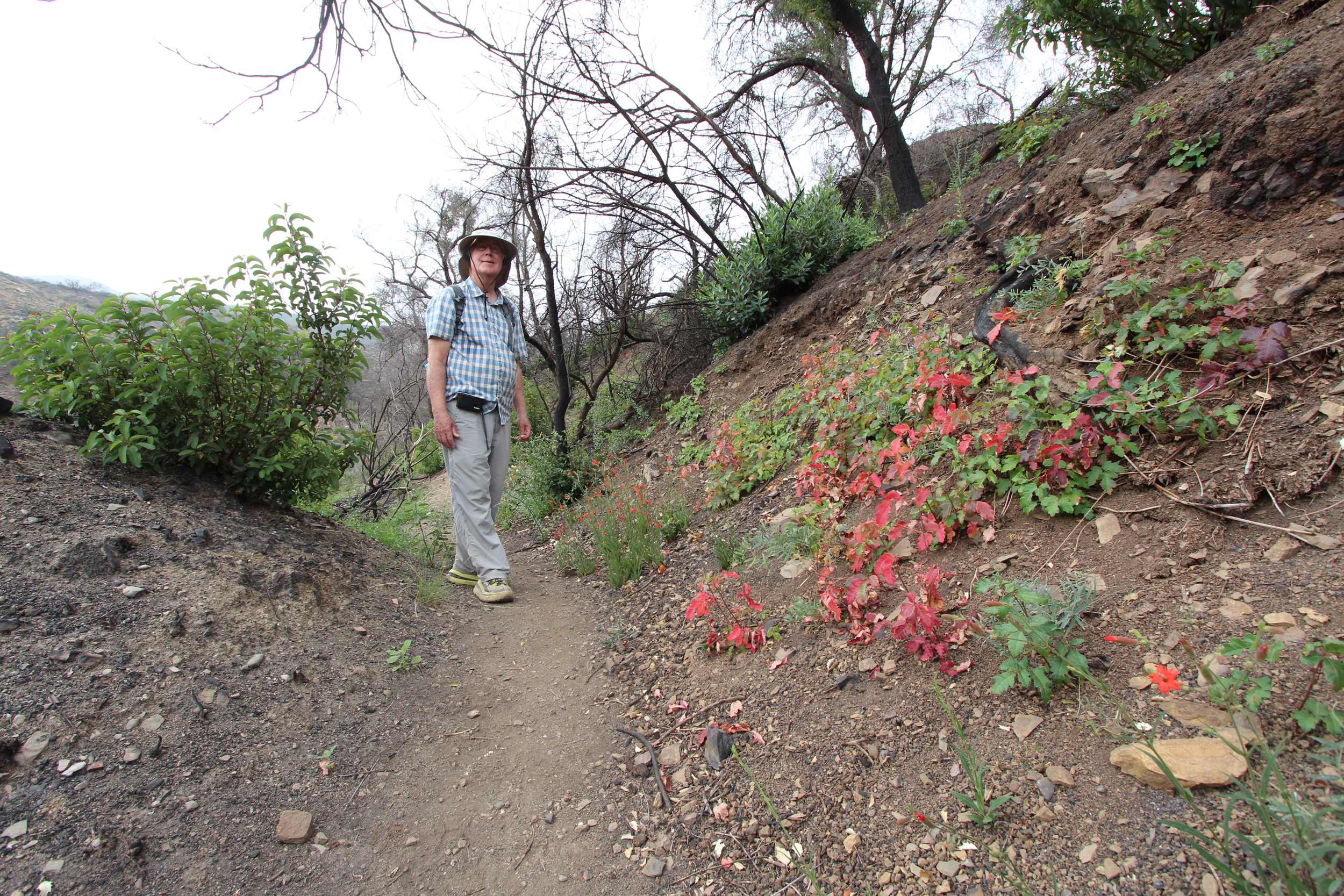 Walk carefully: A trail is flanked by sumac (left) and poison oak (right), which flourish after fires. Image: George Sherman

But after the rain stops, these green hillsides will become the tan color we know to expect. That’s when we see the slower-growing chaparral, an evergreen plant that can live 50 years or more. Recovery begins quickly enough but takes several years to complete. 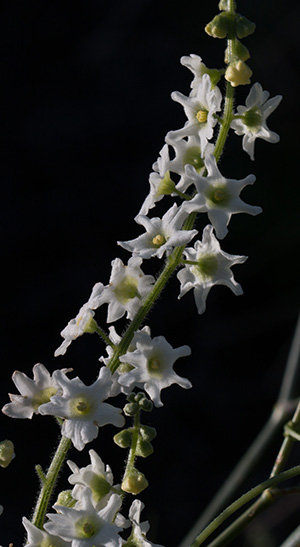 So which plants fare best after major fires? Here’s a look at the recovery strategies that give some plants an edge:

Back to the Roots: The plants that have staked out the ground around their crown/root systems have the best chance of re-sprouting. In places where there was once a single trunk, many shoots now grow upward, like the cucumber flower (right). These plants have advantages over seed-germinated plants, because existing root systems and dormant buds already are in place. The odds against a lone seed germinating and growing to maturity are enormous compared to its chances of sprouting from an existing stump. Toyon and scrub oak are two examples of this.

Seed Savings: Some plants “banked” their seeds in the soil in the years after the last fire and waited for a new fire to create space for them. A subset of these plants reveals itself only after fire and becomes dormant in subsequent years. The seeds of these short-lived “annuals” may have hard coatings that the fire cracks, or insulation that allows them to survive the heat. The fire/heat breaks through these protective barriers (which prevented hydration) and allows germination to take place. 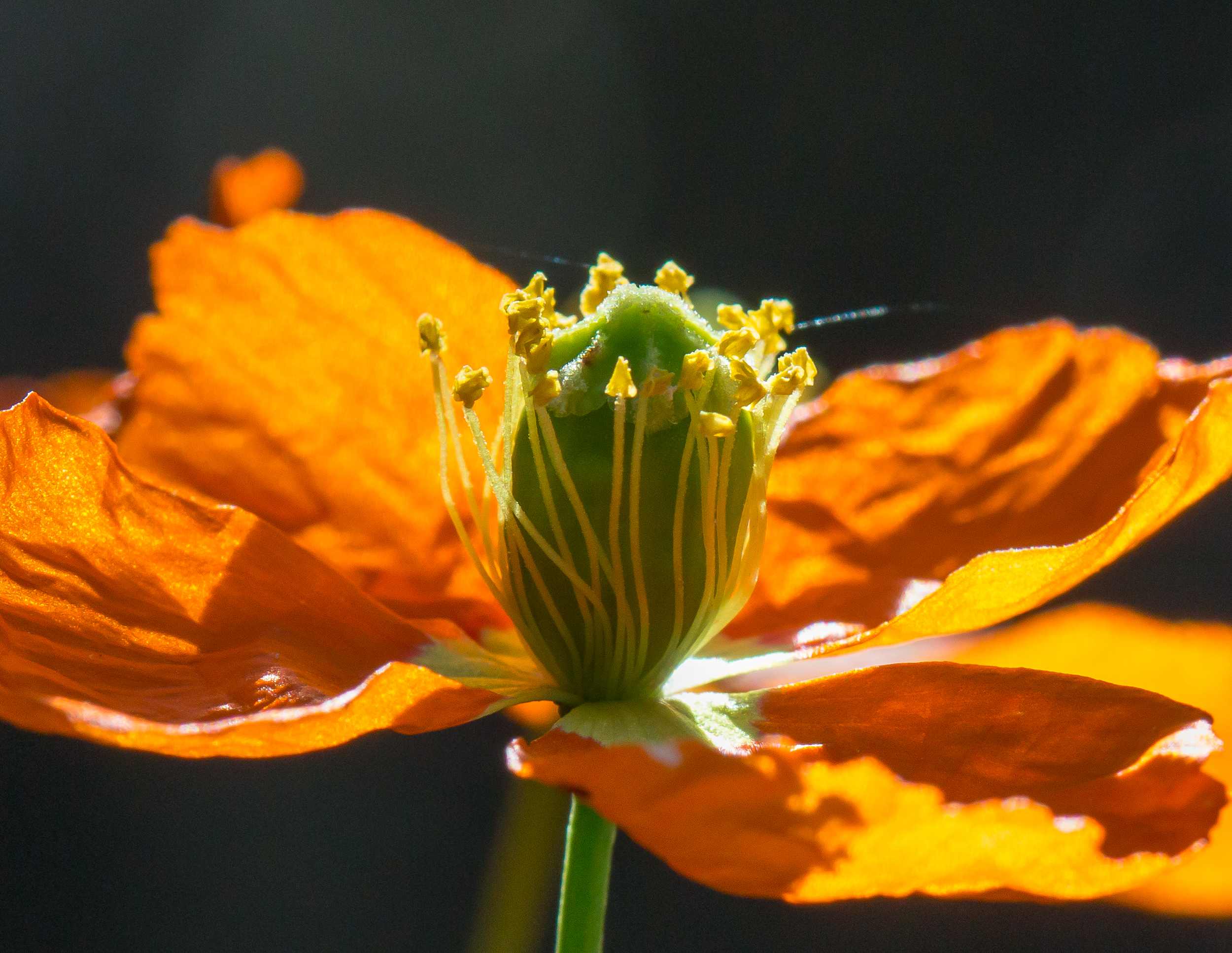 Friendly Fire: Chemicals in the fire’s smoke activate other seeds, like the Fire Poppy Papaver (above). The nitrogen compounds in the smoke signal some seeds that the above-ground biomass has burned, and it is time to germinate.

Backup Plan(t)s: Some plants both sprout and reseed after a fire. Sprouting from a stump is more efficient than germination from seed for many plants. Seeds become a backup solution should the root of the plant burn. Manzanita and chamise use this strategy—akin to having a low-cost insurance plan.

Fire and Rain: Plants in the chaparral community have adapted to survive and recover after fire. Rainfall matters in recovery — our current protracted drought could prolong the time required. Despite adaptation strategies, large numbers of oaks and redshank shrubs are not likely to return within our lifetimes due to the changing climate.

Fires in chaparral used to occur naturally every 30 to 100 years before man’s intervention, and chaparral rebounds quickly with this interval of fires. But when an area burns too often (three to ten years) the seed banks become depleted. Non-native grasses and other non-native species often take advantage of this blank canvas and further their spread during this time.

These invasive plants (mainly grasses) force out many native plants, and the intruders often are quite flammable, which only increases the risk of future fires. Our chaparral environment is diverse and has adapted to a fire cycle, but some plants may not come back in your lifetime and instead live in seed form.

During your outings at campgrounds, always take extra measures to prevent fires. As you light your kindling, take every precaution to keep the flames contained.

One of the silver linings: This year is shaping up to be a spectacular year for flowers — make time to enjoy their beauty and observe some of these adaptations! 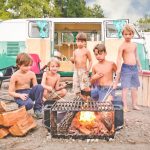 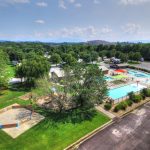 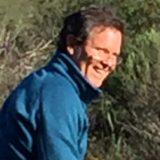 When he’s not working as the Good Sam team’s IT analyst, George Sherman enjoys spending time with his family and hiking and photographing wild plants and animals on the trail. George's work also appears in the Santa Monica Trails Council newsletter and can be found on Flickr.