By Bob Difley
Freightliner is continuing to introduce alternative-power products for the commercial vehicle industry with the introduction of its highly anticipated plug-in all-electric walk-in van (WIV) chassis. The new chassis model is the only one domestically engineered and the first in the industry to be completely all-electric (includes HVAC system) in North America.

The all-electric chassis, developed in partnership with Enova Systems, a leading developer and producer of electric vehicles and hybrid-electric drive system technologies for commercial vehicle OEMs, is built on the Freightliner MT-45 WIV chassis platform. On select delivery and service routes, Freightliner’s studies showed a 100 mile range on a single charge and that customers could save up to $15,000 per electric vehicle annually compared with traditionally powered walk-in vans.

Freightliner designed this truck from the ground up and is going after the walk-in van market though itis another step toward electric powered RVs, admittedly still years away. But what would prove beneficial to the RV market would be acceptance by the walk-in van market, enabling mass production and a lowering of costs by the time it reaches motorhome manufacturers. Freightliner introduced  the first hybrid-electric Class A motorhome chassis in December 2008.

Check out my eBook, BOONDOCKING: Finding the Perfect Campsite on America’s Public Lands, for tips on finding the ultimate in RVing and camping freedom. 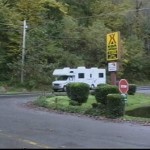