Most class A diesel pusher motorhomes are equipped with compression braking systems. They can provide an initial braking resistance for normal highway driving or, more commonly, help to maintain a reasonable speed on downhill grades without the need to use the service brakes. These are available in three basic configurations depending on the chassis make and model. So let’s look at the differences in these.

The Pac Brake, or exhaust brake, is the first level. These are generally found on the entry to near mid-level diesel pusher models. Their braking drag is created by closing a “Butterfly” like valve that restricts the flow from the exhaust manifold. This is controlled by a pneumatic actuator that is electronically triggered. In addition to activating the valve and a feature common to all auxiliary brakes, the control module signals the transmission to “Seek” a lower gear (Commonly 2nd). This, in turn, causes the transmission to continue to seek a lower gear, subject to engine RPM limits. The braking effort is generally very good to maintain a reasonable speed on a 6 to 7% grade on a 15 ton vehicle.

The “Jake” brake is the standard on the heavier rigs. This system actually alters the engine valve sequencing, via electronic solenoids, and simulates the prime mover as a compressor. This design creates a very high level of drag, proportionate to the engine speed. The higher the motor RPM, the higher the resistance.  Five or six hundred horsepower of braking force is not uncommon at peak conditions. This system can be single, double or triple speed. The single activates the valves on all six cylinders. The two speed system employs three or six cylinders while the three speed design uses a choice of six, three or two cylinders. The multi-speed unit allows a choice of a reduced braking force increasing the control to maintain the desired velocity.

The transmission grade retarder is the least common. It is generally found on commercial vehicles and some top of the line private coaches. It can have up to some seven selected resistance settings.  This system is effective, however heat dispersal in excessive downhill grades must be internally managed.

There have been companies that have tried to develop other methods to control the downward speed of heavy vehicles, mostly using generated electric energy to create wheel rotation resistance.  These have generally been a failure as the heat generated was not manageable.

Well, all of these solutions are heads and shoulders over the stick against the tire method we once used on our soap box street racer.  Today, life is good.  Enjoy. 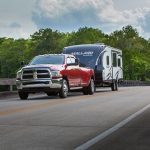