In the Museum of African Art

With one exception, I would describe what we’ve experienced a notable, memorable stop along our route.  It’s been years since we both visited the nation’s capital.  We carried our impressions back with us and supplemented that with new appreciation of the grandeur of it all.

We feel like we did it right. The first trip into the city (except for following our GPS’s routing of us through the plate of spaghetti they call freeways and roads) had us boarding a Gray Lines Tours bus for “DC at Night.”  We knew we would have a chance to revisit the must-see sights in the daytime; so, seeing it at night gave us a whole different perspective.

Best of all, the crowds, especially the hordes of hyperactive school kids (mostly on cellphones), were more manageable when climbing the steps of the Lincoln Memorial and the numerous other sights we took in that night.  Even the long line of tour buses after 9 p.m. was mind-bending.

We read this week that the National Mall in Washington has more visitors than Yosemite, Yellowstone and Grand Canyon combined.  We can believe it.  And, incidentally, we read in a news story about Volkswagen America donating $10 million to renovate the National Mall – it can use it, particularly since it was never designed for 25,000,000 sightseers a year.

We toured several of the Smithsonian Museums, all of which filled us with sights, sounds and history far beyond what our nature-minded brains want to assimilate.  That one exception mentioned above was the “Hirshhorn Museum of Insipid Stuff.”  They call it modern art, but as interested and tolerant as I tried to be, their displays were mostly outside of what I could consider “art.”  I’d love to hear a rebuttal from any readers.

Food in the tourist areas of D.C. is outrageously expensive.  Fast food for the price of a sit-down dinner in a mid-price diner elsewhere plunged deeply into our budget — brown-bagging is a good alternative.  On 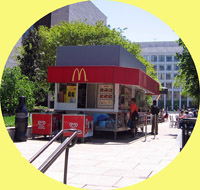 A McD meal on the National Mall for just under $10!

the other hand, your taxes plus donations pay for the Smithsonian Museums, so entry to all is free.  We learned a great deal about what to see while on our nighttime tour; other than that, it’s probably a good idea to go online to learn about the many elements of the Smithsonian.

We parked our RV on the outskirts of the city, naturally, and took the Metrorail into town.  Although I had plied the tunnels and stations frequently in the ‘80s, it was an all-new challenge … things had changed. 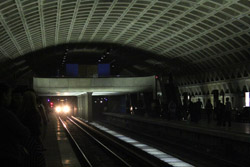 The Metrorail Arriving to take us into Downtown

Several comments worth making about the Metro:  1) it’s fast and convenient.  2) the people who work there and all the commuters we met were friendly and helpful.  3) seeing the variety of characters sitting or standing kept our interest.  4) try to avoid rush-hour mobs.  And 5) don’t get overstressed, which is easy to do.  It’s really very user-friendly once you get the hang of it.

If there were ever a city that begged for GPS guidance for the motoring visitor, Washington, D.C. is it.  Even with “Camille” barking directions, I veered when I should have zigged; exited when she said to go straight; cursed when she said in an syrupy, accusing voice, “RECALCULATING!”

What we liked other than the standard attractions:  The super-graphic “artwork” on the ground floor of the Hirshhorn Museum (just to be fair, I put that first).  The Theodore Roosevelt Memorial, and next to it, the Martin Luther King sculpture.  I seem to remember sitting in front of the Vietnam Memorial meditating for a long time in its early days; there were no benches this time.  The exterior of The Castle, first building of the Smithsonian.  The Air Force Memorial – quite a surprise.

Monique’s favorite museum is the awesome Smithsonian Museum of Natural History; yet, in each museum we visited, there was at least one thing that we selected as 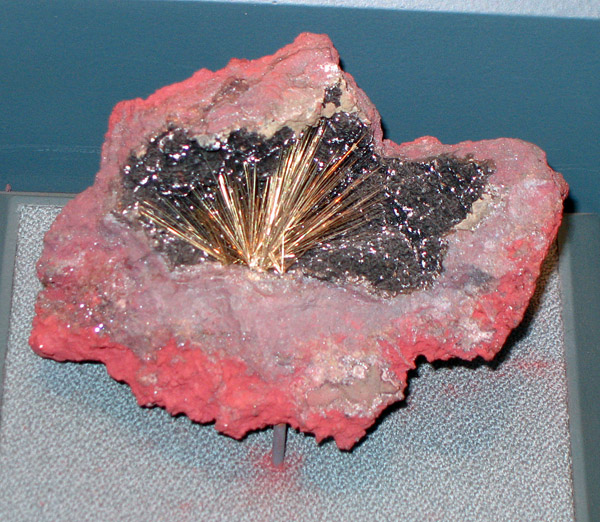 Hematite formation at the Museum of Natural History

the best.  I’ll let you decide when you visit, and we all welcome your comments via email to [email protected]. 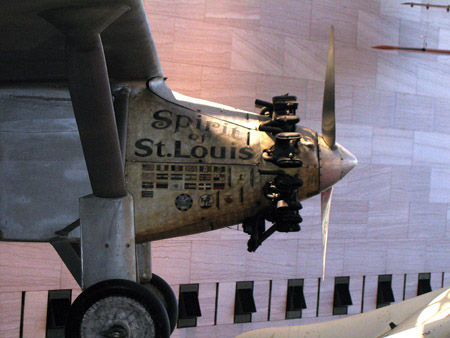 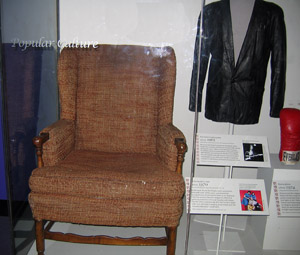 "Archie, Where are you now?" In the Museum of American History modern-culture exhibit 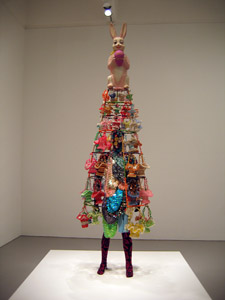 If there is one city we would recommend above all other cities, it’s Washington, D.C., and its historic surroundings.  If you spend only a day in D.C., you will have learned a lot.  The more time, the better, but this is a good time to mention that the numerous attractions, the pace, the crowds and the transportation all add up to a tiring experience.  We have been fortunate to be able to spend a day wearing out tennis shoes and sandals and the next day recovering.

Next:  The Newseum.  Meanwhile, this visit hasn’t been boring; thus, we remain the “Never-Bored RVers.” We’ll see you on down the road.

Because of the numerous Spam comments on this site, the comments section has been deactivated.  Please email us at [email protected] and I will pass along your comments.  Learn about Alaska and see travel photos at ontopoftheworld.bz.

Are You Ready to Rally with Camping World/Good Sam? Previous
From Williams Lake to Wheeler Peak? Next